That line from Clueless popped into my head repeatedly as I watched Liz Manashil’s filmmaking debut. Brittany Murphy delivers the “way harsh” insult to Alicia Silverstone as a means for discrediting her. If you’re a virgin who can’t drive, who are you to give someone life advice? Of course, those characters are teenagers, so they aren’t exactly brimming with wisdom. Amelia (Christine Weatherup), the protagonist of Bread and Butter, is thirty years old.

Early on, Manashil cleverly establishes Amelia’s desire to “live in a French movie”. This sets the audience up to expect a certain quality of whimsy (that her name is so close to Amelie can’t be a coincidence). When she finds an annotated novel in a used bookshop, and vows to meet the man behind the notes, you think you know what’s coming. But Amelia is no Manic Pixie Dream Girl. She’s more like a Manic Normal Human Woman. And Bread and Butter, is a romantic comedy about what dating is really like for socially inept oddballs.

Weatherup gives a memorable performance as a woman who let late blooming turn into arrested development. She may have a job and her own place, but she’s living like someone who just moved out of her childhood home. In fact, she still has dinner with her parents pretty frequently. Her apartment looks like a child’s room in a bed and breakfast, with antiquated wallpaper, and a single bed. While the narrative doesn’t necessarily admonish Amelia for her lack of experience, she awkwardly fumbles her way through life in a manner, which suggests she needs to get it over with already. As her boss inappropriately observes, “[he] can see [her] hymen from here”. It’s not that she’s a prude, exactly. She rubs one out on the regular (and her fantasies occasionally resemble something out of American Horror Story). But it’s late enough in the game for her virginity to feel practically insurmountable. 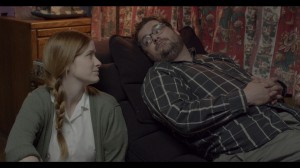 In a moment of impulsiveness, Amelia visits the address printed in the used book so that she can meet Leonard (Micah Hauptman), the man who has been tickling her fancy, so to speak. It’s as uncomfortable as such an encounter might be in real life, with Leonard initially suspicious of her motives and sanity. She makes a quick, sheepish exit, and acquiesces to going out with Daniel (Bobby Moynahan), one of her employer’s clients. When she unexpectedly reconnects with Leonard, Amelia finds herself in the middle of the world’s most awkward love triangle.

Fortunately for micro-budget filmmakers, Hollywood has yet to learn that comedians tend to be phenomenal dramatic actors. Bread and Butter is a comedy, but the characters don’t know it, which is why it works so well. Moynahan’s performance, as Amelia’s more grounded romantic prospect, lands miles away from his broad SNL presence. He especially shines in the scene he shares with Hauptman, in which Leonard passively hijacks Daniel’s date with Amelia. Moynahan’s body language speaks volumes. (This scene also stands out for telegraphing so much about all three characters with almost no dialogue, in a film that is generally dialog-heavy.) I can’t think of a single dramatic actor who would have done a better job as Daniel.

The same goes for Lauren Lapkus (Orange is the New Black), who plays Dierdre, Amelia’s best friend and relationship role model. My one complaint is that Dierdre is relegated to the usual peripheral “sounding board” role. But at least she gets the chance to point that out to Amelia (though she ends up apologizing for it later). Fortunately, Lapkus manages to flesh out her character through delivery and facial expressions.

Manashil’s script is fresh and compelling, often reminiscent of Miranda July’s similarly themed Me and You and Everyone We Know. These are people we know, or (people we are), though you wouldn’t know it from watching mainstream cinema. Depression isn’t Angelina Jolie in smudged eyeliner. It’s wearing sweatshirts with paint on them and occasionally falling into a quivering mass on your bed. It’s not easy to present frank discussions about panic attacks, depression, and death but still qualify as a comedy. Bread and Butter is a terrific debut and I hope it’s only the beginning of a prolific career for Manashil.