Fb. In. Tw. Be.
Comedy
Latest Reviews
On the Festival Circuit
Reviews

(BINDLESTIFFS world premieres in the Narrative Competition section of the 2012 Slamdance Film Festival. It screens Saturday, January 21st, at 10:30pm, and Thursday, January 26th, at 1pm. Visit the film’s page at the Slamdance website to learn more.)

Blending tangy cynicism with mean and dirty comedy, BINDLESTIFFS has, buried deep in its DNA, a precocious understanding of how ignorance and ego turns men into clowns. Co-writers Andrew Edison (who also directed) and Luke Loftin play an eponymous pair of teenage rebels, but they’re far from a voice of reason in this swaggering update of the high school comedy: they’re as clueless as the grown-ups, and way more reckless.

A Texas school board has decided to ban, and publicly burn, all copies of Catcher in the Rye, and an elderly teacher dutifully goes desk to desk collecting everyone’s copy of the book. Andrew—a natural, rubber-faced comedian—launches into a hilarious bit, first lying that he left the book at home, then jumping up and throwing a confused activist fit. He recruits Luke and their friend John (John Karna) to protest the ban by drawing an awesomely dumb and filthy picture on a bathroom wall. They get busted by the school’s paranoid, over-eager security guard Charlie (a very funny Will Fordyce), and subsequently suspended.

This inspires Andrew to hit the road with his buddies and “experience the real world, Holden Caulfield style.” John, a naïve and impressionable Christian goody-goody, is home alone with his sister. “I’m supposed to be grounded, guys,” is his totally earnest reaction to Andrew’s plan; “My parents are out of town, but Mindy would not be cool with me leaving.” 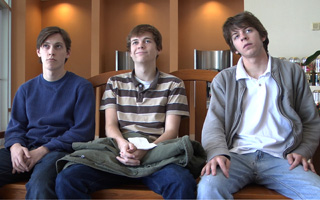 Once John is (easily) convinced, they drive to a smelly motel and Andrew wanders off and tries to bond with a sketchy looking stranger: “Me and my friends ran away from school… we’re trying to fuck shit up… really cool…” Meanwhile John, who’s also a wide-eyed romantic, gets unsolicited advice from chronically over-confident Luke about how to get with the drama teacher he has a crush on: “She can’t be your girlfriend until you’ve fucked her—that’s how relationships work.” He gives John a sex lesson full of odd specifics and clothed but ridiculously lurid demonstrations.

John ends up getting drunk with a homeless woman at a bus stop. The woman, never seen as more than a hoodie with a long mop of brittle gray hair cascading out the front, takes the film into much darker and riskier comedic territory, as a blank slate for the boys to invest with all kinds of extreme and absurd ideas. Not knowing how to take her pulse, they believe that she’s dead; when she wakes up, John believes they’re in love. She throws up, so they decide she’s pregnant and try to determine her stance on abortion. The always well-informed Luke explains that there’s pro-life, pro-abortion, and “somewhere in the middle—is pro-choice.”

Edison has a wonderfully light touch, keeping everything true to character and never forcing a joke. The film is full of brilliantly stupid lines, tossed off casually but with Swiss precision timing. The final act blithely makes fun of domestic-terrorism paranoia—as Charlie the security guard gets his gun-totin’ freak on—and ends with a back-yard funeral scene played totally for black comedy, with teary speeches, readings from the Bible, and an effigy of the deceased so dumb and insensitive it just has to be seen.

Edison’s film impressively does its best to hide how smart it is, and doesn’t hold back on going broad with sight gags and gross-out humor—after all, it’s a teen comedy. But its golden fountain of funny comes from how its characters take insufficient knowledge mixed with a lot of imagination and ignorantly project it onto whatever appears in front of them. BINDLESTIFFS fearlessly crosses just about every line that a comedy shouldn’t; it’s a consistently laugh-out-loud funny, sharp-as-claws satire of the America we live in.