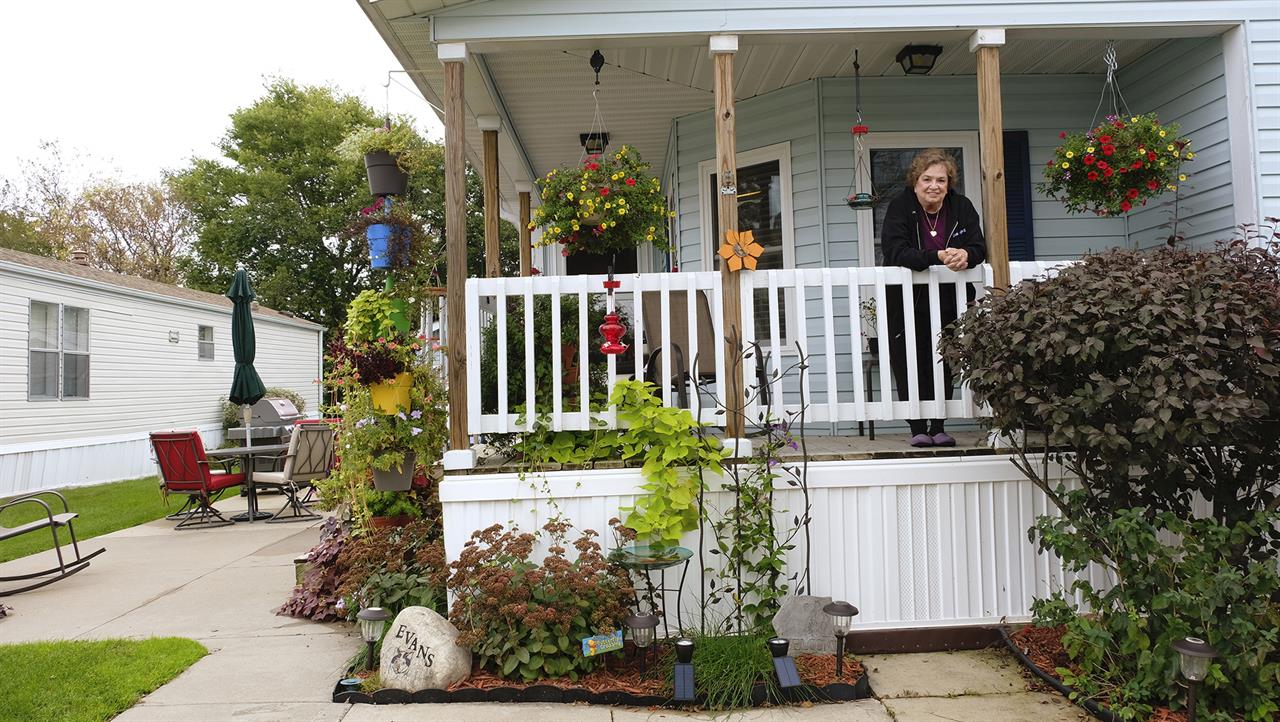 (DOC NYC’s 12th edition will take place in theaters and online November 10-28, 2021. Hammer to Nail has the fest covered so stay tuned for tons of reviews! Here, Matt Delman gives a film review of A Decent Home.)

20 million Americans live in mobile home (or ‘trailer’) parks. Most of these people love and cherish their homes, despite the stigma that they are trashy. Quite the opposite, in fact, these homes have so much value that private equity firms like the Carlyle Group are buying them up across the country. That causes problems when the new owners raise rent and try to squeeze every last dime out of these working-class folks. As filmmaker Sara Terry says in one of her calmly damning voiceovers, “Housing on the lowest rung of the American dream is being devoured by the wealthiest of the wealthy.” In A Decent Home, Terry’s activist personality shines through, as she speaks to us throughout the film in voiceover, and briefly appears on screen. We also hear her asking the hard-hitting questions behind the camera. She’s a fighter, and just what we need in this battle against greedy developers and politicians who feel no shame in displacing families who own their trailer home but not the ground it sits on.

Terry fills her documentary with fascinating and often disturbing facts. Here’s one: 1/3rd of Americans live in a home they can’t afford. So, who can afford to buy a house? Even employees at Google, who move to the Bay Area with their families, can only afford the nearby mobile home park — called the Santiago Villa, the most expensive trailer park in the world. Elsewhere, in Aurora, Colorado, a developer buys a trailer park for $20M, then shortly after closes the park, kicks everyone out, re-zones it, and plans to sell the land for $100-$300M. The injustice is hard to fathom. Here’s another fact that Terry drops on us: it costs $25,000 to move a mobile home. Which means for those facing eviction from their land, they are likely to leave their trailer behind because they can’t afford to move it. And even if they could, some parks won’t allow you to bring your own in, forcing you to buy from them. So, where do these people go?

The scourge of homelessness in America is undeniably being driven by increased cost of living. Terry makes it clear that wall street and most politicians don’t care. One that grants her an interview is Mayor Bob Legare of Aurora, who seems less evil than tired. His attitude is basically; if it follows the letter of the law, then it’s okay. At the center of Terry’s film are themes of greed and power. But perhaps the most worrisome of all is that of indifference. What are elected officials doing to protect the people they represent? When it comes to the housing crisis, not enough.

In a brilliantly filmed undercover scene, Terry attends a conference where a man speaks to a room of young entrepreneurs and lays out a business plan to acquire and optimize mobile home parks for maximum revenue. The businessman’s dialogue is straight up dystopian: when speaking of their prospective tenants he says, “You don’t wanna know their name.” But that’s exactly what Terry wants to know with A Decent Home. By interviewing the residents and telling their stories she puts a face on the issue. It’s a fascinating and shocking exposé, a cinematic indictment, and yet Terry leaves us a morsel of hope, with the example of residents in New Hampshire who bought their own park, and are trying to help others do the same.