, or you can also stream it now through Netflix Instant.)

What might be called the key to unlocking 2001: A Space Odyssey is also its most puzzling element. A featureless black obelisk, the monolith embodies the pure grandiosity of Stanley Kubrick’s vision despite the austerity of its design. It dominates every scene in which it appears; all who come across it—whether ape, human, or something else entirely—stand in utter shock and awe. More than its imposing stature or the ominousness of its seemingly random appearances, it’s the effect of the monolith that makes it loom so large among all other objects in cinema: accelerating evolution. Immediately after discovering the monolith, the apes of 2001‘s lengthy, symbolically-rich prologue fashion tools out of bones; Dave, the main human character in the film, is transformed into a being most often referred to as the “star child” whose essence remains a matter of debate. The apes’ advance is particularly double-edged, as they weaponize their new discovery just as quickly as they happen upon it. Mankind’s capacity for discovery and exploration is matched only by his irrepressibly violent nature, Kubrick posits, and with each leap forward comes a small step backward.

2001 is a film built on questions whose profundity lies mostly in their simplicity: what makes us human, and how might we become something else? Its inherent ambiguity, which at times reaches the point of surreality, is a reflection of the fact that these questions are likely to go unanswered for the entirety of our time on earth—and potentially beyond. Kubrick sees the evolutionary ladder as a sliding scale in which we maintain aspects of our former selves with each rung climbed. This vision, though it offers something resembling a theory regarding the nature of our existence, is by no means definitive, nor is it meant to be. 2001, linked as its beginning and end are, is more alpha than omega. That Kubrick conveys such enormity with near-wordlessness is testament not only to his consummate visual sense but also to his understanding of cinema’s nature as a primarily sensory experience. 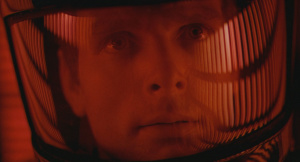 This dance through space and time is thus a heavily image-driven affair: spacecrafts pirouette, satellites waltz, and Kubrick makes it clear via a brilliant match cut linking the first two sections of the film that our activity in space is in every way an outgrowth of our lives on earth. 2001‘s palette is composed of stark whites punctuated by plush red chairs, yellow spacesuits, and the dizzying lights of distant space. The effect of this minimalist mis-en-scène is to allow Kubrick to transmit his sweeping vision unfettered; crowding the frame would distract from, rather than enhance, this vision. It most often isn’t what we actually see that frightens us, but rather what we imagine might occupy the peripheral darkness. The sheen Kubrick grants all this is as sleek and austere as it is foreboding, something exemplified by the HAL 9000 computer just as much as by the monolith. Where the monolith is the apotheosis of unknowability, HAL is the sum total of everything we do know, and he immediately arouses suspicion for the single red dot that comprises his mechanical visage and the soft monotone in which he speaks. Knowledge can be as terrifying as the unknown.

What’s most striking about these two beings—one inanimate, the other strikingly sentient—is the chilling sense of unease that results from the revelation that both represent decidedly human impulses. If the monolith is unknowable, then so, too, are aspects of human nature, but HAL reflects a side of ourselves we know (and fear) all too well: the ability to discard emotion in deciding matters of life and death. The two are very much of a kind, and it’s telling that people tend to focus on the monolith. As humans, we want to become more than we are; whether this entails knowledge of the cosmos or a better understanding of ourselves is often immaterial. Whether what we uncover is in our best interest to obtain, or even within our power to grasp, is unknowable, but we nevertheless reach into the void in search of some greater truth. Though missteps may hasten our ruin, they also bring us closer to an end–whatever it may be. 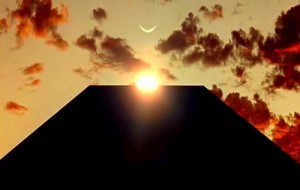 There’s no small amount of humanism to be found beneath 2001‘s sterility. The film isn’t anti-technology so much as an explication of the violent impulses that lead us to use technology as a means of destroying each other and ourselves, as well as the amount of time we spend looking at screens rather than each other’s faces. When asked over videophone by her father what she wants for her birthday, a man named Heywood’s daughter asks for a phone despite there already being several in her home. Technology isn’t the problem, but using it to replace human interaction is. It’s fitting, then, that HAL displays more overt emotion than anyone else in the film.

The majesty of 2001, though at this point well-charted, still beckons to be unraveled. Kubrick alludes to his film’s celestial mysteries rather than spell out their particulars. Like Heywood, he doesn’t seem at liberty to discuss them: the questions posed by 2001 are of “unknown origin” and must be experienced firsthand before any attempt can be made to understand them. To merely explain their nature would disallow the possibility of discovering them on one’s own, which Kubrick likens to perhaps the most vital human task of all.