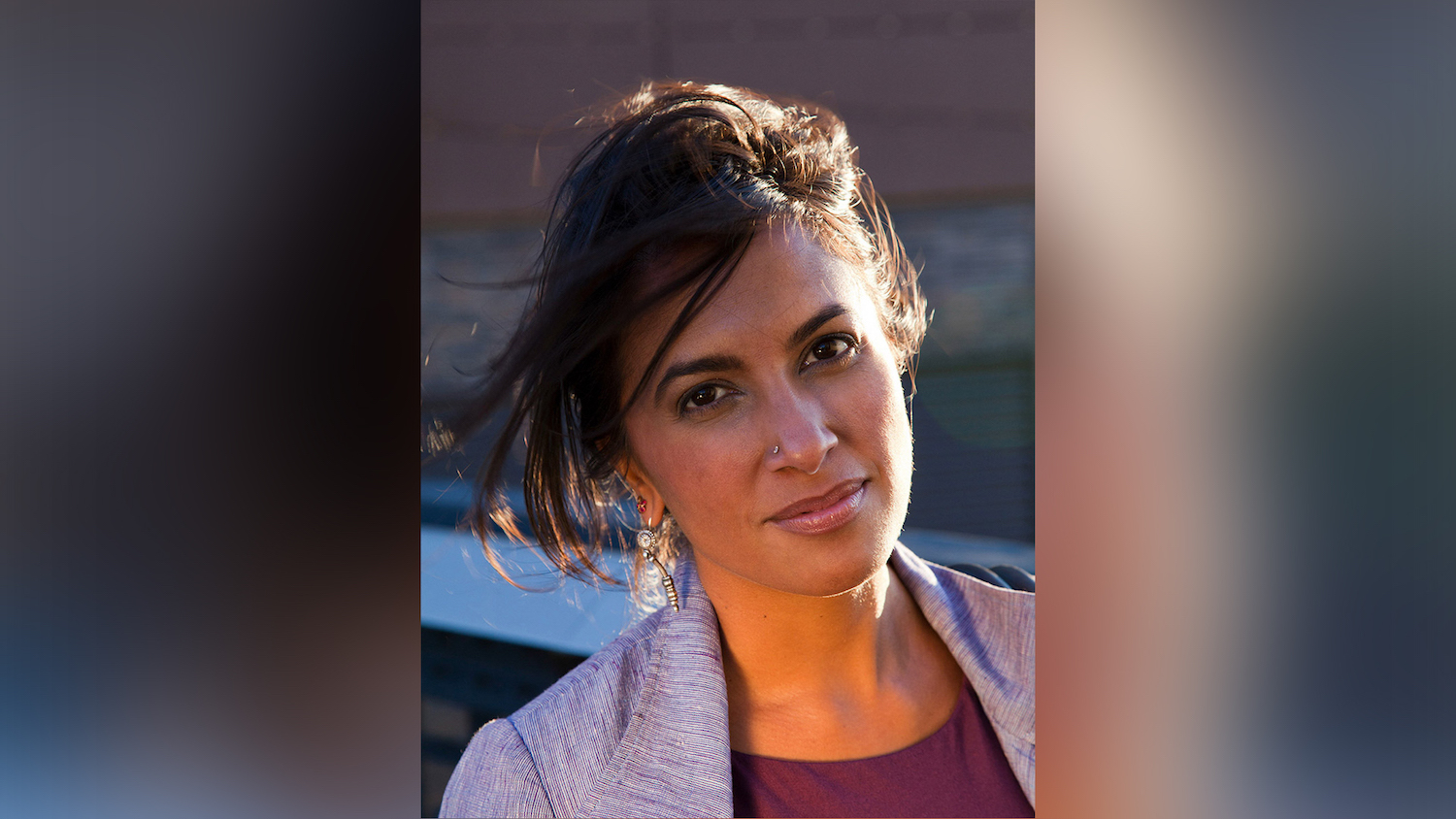 Director Shalini Kantayya (Coded Bias) just premiered her new documentary, TikTok, Boom (which I also reviewed), at the 2022 Sundance Film Festival, and while the festival was in progress I had a chance to chat with her by Zoom. The movie examines the present-day phenomenon that is TikTok (as in, the video-sharing app), how we got here and what the future holds. What follows is a condensed digest of our conversation, edited for length and clarity.

Hammer to Nail: I’m not a user of TikTok. Even though I’m a university professor who runs a film program, I’ve avoided using it because there’s already too much social media in my universe, and I find that exhausting. How familiar were you with the ins and outs of TikTok before making this film? Were you a user, or are you now, or were you just curious?

Shalini Kantayya: Well, I love all things tech and so I tend to keep up or try to keep up at least with some degree of tech. I think I discovered TikTok sometime during the pandemic and got addicted quite early, and was astounded by how well this algorithm felt like it knew me. And then, when I started reading about the controversy, I just thought the whole thing was bizarre, how a teenage dance app would become the center of national controversy and geopolitical conflict. And so that set me on the journey to make the film. And I also think that what is true of TikTok is true of other social-media companies, I think because TikTok has such a young audience, it completely fascinated me because it seems to be indicative of the future of what’s happening with social media.

SK: I’m sort of a sci-fi fanatic, so I think my passion for tech and thinking about the future just comes from someone who likes to imagine the future. And my favorite time period is five minutes into the future, and because I’m a documentarian by training, I also have a practice of rigorously researching. So I do rigorous research, but then there’s that extra little bit of imagination. It’s almost like speculative documentary, in a particular way. And so anyway, I love to play in that space and I think technology lends itself to that because it’s moving exponentially.

HtN: Is there a work of speculative sci-fi that is a touchstone for you?

SK: I don’t know if you would call this speculative sci-fi, but when I look at Steven Soderbergh and Scott Burns’ Contagion, that certainly seems like five minutes into the future, or that becomes almost true. That seems to be something that was very well researched and a prediction based on research. And I think that filmmakers can often imagine the world, but in a very informed way.

HtN: What is it about the TikTok algorithm that makes it so good at predicting user taste?

SK: It can figure out a lot about your individual taste just by the amount of time you spend on each video and the amount of time that you’re spending if you take any action on it. And I think that it’s constantly sorting you into categories of people like you, and sending you content based on that. And so that is some of the way the algorithm works, but the truth is we also just don’t know what’s in the special sauce, that it’s proprietary, and we have no idea.

HtN: What fact about TikTok that you learned while making this film most surprised you?

SK: I’ve been most surprised by how content moderation used to happen in this very clunky way, and the way in which we, who have a sense of freedom of speech, would’ve been alarmed by some earlier policies around content moderation. I think that was a little alarming. And the other thing is that I didn’t realize until making the film that the user base of Musical.ly, which then became TikTok, was solidly under 14. And it also just raised my awareness about how young kids are getting access to very powerful, persuasive recommendation algorithms that can create a pretty complete psychological profile about us. And should there be any laws about that?

Because I think that in the ‘90s, when the FCC passed the COPPA, it was because there were all of these studies that were saying, “Okay, we need to separate Elmo from the sugary cereal because a child can’t tell the difference between Elmo that they trust and this commercial.” And yet, kids’ brains are still forming, and influencer culture can be really persuasive without a lot of disclaimers. And so it’s just very interesting. And China recently just passed a law banning … not banning, but passing restrictions on the amount of time that children can spend using TikTok, but we don’t have any laws on TikTok here in the US.

A still from TIKTOK, BOOM

HtN: Another thing that I find so fascinating about TikTok, as a filmmaker and someone who teaches this stuff, is that we’ve had this ongoing battle ever since the invention of these devices—battle is perhaps the wrong word, but struggle—to hold onto this notion of horizontal cinema, which something like TikTok is completely destroying. I mean, the iPhone started it, but now everyone is so comfortable just photographing vertically. In your own work, do you find yourself thinking along the lines of vertical cinema versus horizontal cinema? Are you also holding on to this notion of one over the other? What is your struggle with the vertical-cinema model?

SK: I love the question. And I’ll tell you that when I first started making this film, someone entertained the idea that the whole film be vertical, and I said, “Absolutely not!” (laughs) I always wanted the film to be something that could play in a theater. And so obviously I think of things in a very cinema mode. And so even when I would be with friends and they’d be taking pictures vertically, I would think, “This is wrong, you can’t take…this is wrong.” But I think in the making of this film, it just showed me a different…it’s just different. And technology reinvents different art forms. And so I think that I’ve learned to use it. That being said, I think in the making of this film, I really wanted to think about creative treatments of how we use the TikTok scroll.

SK: Zachary Ludescher. He did all of the visual effects. And I think we talked about this glassy, distorted effect, which comes through, I think, with our use of filters, in the work that I did with my cinematographer. And in the graphics work, we tried to give everything a glassy style that was reminiscent of the TikTok screen.

HtN: Were there people that you reached out to about being in the film who turned you down, maybe somebody from Facebook, for example, or Zuckerberg himself?

SK: TikTok turned down an on-camera interview, but they did give us a statement. And we certainly tried to get other stars, but I think that we got the perfect cast.

SK: Well, basically, all of the characters in the film have lives who’ve been changed by TikTok in some way. And I think each of their stories intersects with a larger theme in the film, and that’s how I settled on them. And obviously they’re very charismatic and great on camera.

HtN: Having spent so much time with TikTok, what kinds of apps do you foresee, if you had to make a prediction, as coming after TikTok?

SK: I love the question because I definitely have an answer for you. I think that the future is these recommendation algorithms that know us better than we know ourselves. And I think that it’s so interesting, this moment that we are at with this AI technology, because it doesn’t have compassion, it doesn’t have ethics, it doesn’t have morals, but yet it can know us to a certain degree better than we know ourselves, in a particular way. And I think we could live in a world where algorithms decide things.

I mean, they’re already deciding things that are everything from dating apps to information to…all of our lives are being transformed by this technology. But I think the recommendation one is especially powerful. And I think it’s a little scary because I think what the algorithm gives you is more of what it thinks you want. And ideally, we want to live in a world where we are getting dissenting points of view. And I think that’s why social media has become such a big player in the political state of our country, in the climate of our country.

HtN: Thank you so much for chatting with me and thank you for making the film.

SK: Thanks so much for your time. I really appreciate it.