I met with Romanian director Corneliu Porumboiu (Police, Adjective) on Friday, September 6, 2019, at the Toronto International Film Festival, to discuss The Whistlers (which I also reviewed), his latest film. An engagingly strange, lyrical and melancholy crime thriller, it journeys back and forth in time and place, advancing its elliptical narrative in alternatingly humorous, violent and dramatic steps. At the center of the story is a whistling language used by mobsters on La Gomera (the film’s original title), one of the Canary Islands. Here is a condensed digest of our conversation, edited for length and clarity, with Porumboiu’s language occasionally altered to fit into American English idioms.

Hammer to Nail: If you could explain whence the whistling idea that is at the heart of your story. I understand that it’s not just from your imagination, but a real thing. Please explain where that comes from.

Corneliu Porumboiu: So, there’s a whistling language on La Gombera island, which is an island in the Canaries. It’s a small island next to Tenerife and there they used to communicate by whistling, which in fact is a coded whistling language for Spanish that is something that you could translate into any Indo-European language.

HtN: It’s such a curious secret language, though, because although you may not know what they’re saying, it’s not exactly unobtrusive, right? Do you have any idea how this came about as a secret coded language? Because it draws attention to itself.

CP: We don’t know the origin of this language. The island was colonized by the Spanish in the 13th century, so there are theories that it was another language before and the natives from the island adapted this language to the Spanish form. And like that it became like a code. On the other hand, it’s a volcanic island where it is very difficult to have access to things and I think they needed that to communicate over long distances. When I did the research for this, I found out that there is a village in Greece where they used to do a certain type of whistling language, though not as elaborate as this one. In Turkey there’s a village and there’s also another one in the Pyrenees in France, in Africa and in Mexico, and (laughs) you can hear it in the Western film The Searchers, so maybe the Native Americans used to have that, too.

CP: No, it’s a set that’s been there for more than ten years.

HtN: Well, I love its inclusion in the story. Since we’re on the subject of language, I’m curious about the Romanian language, itself, which seems to include some elements of Russian and French, among others. It’s not the only language to include words from other languages, of course. But there’s “da” for “yes,” which comes from Russian, and then “merci” for “thank you,” which comes from French.

CP: Romanian is a Latin language, but I think it has about 20% of its words that are Slavic in origin. We have also Turkish words. Since Romania is in the Balkans, we have a lot of elements from other cultures around us, but we are the only Latin language in the region.

HtN: It make sense, given its geographic position, that it would have these other influences. So, let’s talk about the cast. The only person that I recognized was Vlad Ivanov, because he’s been in some other Romanian films that I’ve seen, such as Graduation, by Cristian Mungiu. How did you cast him and how did you cast your actresses Catrinel Marlon and Rodica Lazar, both of whom are fantastic? 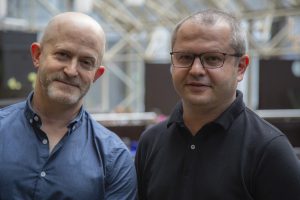 CP: So, first, Vlad Ivanov is an actor I like a lot who also worked on another project of mine which is called Police, Adjective. When I started this new project, I said that I wanted to make, in a way, a story about this same police officer, ten years later. When I chose to write the script in that direction, I was therefore thinking of him. For the other actors I did casting sessions. For Catrinel Marlon, I saw a lot of actress for the role of Gilda, and ended up liking her the best.

HtN: She has a very expressive face. It seems like her natural look is melancholic, so when she does smile, it’s surprising. How about Rodica Lazar, who is also very good as a sort world-weary head of the police department?

HtN: Yes, she is. I really enjoyed her performance. So, how did you location scout for the film? What came first? Your knowledge of the whistling language or your desire to shoot in the Canary Islands?

CP:  It was the whistling language. (laughs) That was the initial thing, and after that of course I was impressed by the island when I got there. Because its like a character for me.

HtN: Did you ever face any imminent threats from inadvertently coming across local mafia as that poor unfortunate movie director in the film does? (laughs)

HtN: (laughs) I thought that maybe that was autobiographical.

HtN: So, I really like the temporal shifts – the time shifts – that you do in your film, not only time shifts but geographic shifts. What made you choose that as a narrative method in your movie.?

CP: For me, it was, in the end, the story of someone who’s going to learn this whistling language. So, that was the main structure of the film; I built it around this process. So, it is a character who is learning the language to use in working with the mafia and at the end goes through a change. So, it was in a way a double movement; it’s a movement of the learning process and at the same time this process makes him discover certain things. I wanted this gradual movement and also an interior one, you know. So, that motivated the choice of the flashbacks and more. 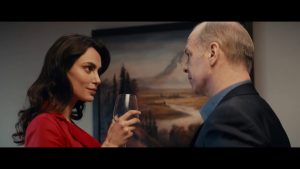 A still from “The Whistlers”

HtN: Going back to the locations, I really enjoyed that opera hotel. How did you come up with the concept for this hotel? It’s based around the playing of…I believe its an Offenbach duet, that becomes sort of the theme of the film until the end, when you switch to Strauss’s “The Blue Danube.”

CP: Yes, “The Blue Danube” and then Orff’s “Carmina Burana.”

HtN: Yes, the “Carmina Burana,” too. So you have Orff, Offenbach and Strauss. But how did you come up with the idea for that hotel?

CP: So, yeah, the first point was that I needed somewhere for Zsolt to hide his money, so he does it in a hotel where his friend plays opera, so no one goes there. (laughs) And after that, of course, Offenbach’s “Barcarolle” works on a dramatic level because we hear it on the island and it’s also in the beginning, its like the mood of the character. So, I play with this song in different ways, you know. And I wanted to play in a certain type of space there. And then, when I found the final location, which is in Singapore, they have a program of music with lights synchronized with the music. So, I started to like all this music and I chose to use what they had there.

HtN: How did you choose that location in Singapore?

CP: In the film, a very important space is the garden of the mother. Like the island, it looks in the beginning like it is beautiful, but then shifts into another thing. I wanted to have for the end something very post-modern future-like. So, I had a few ideas and a few locations in my mind, and I searched the internet because I didn’t have money to travel. I found something in Hong Kong and after that in Shanghai, and then this one, and I think it was perfect.

HtN: Yes, it works well as a final image in the film. So, at the end, we think that the main relationship that’s driving the plot is that between Gilda and her boyfriend Zsolt, before we realize it’s all about Gilda and Cristi, the cop. But then you have this hinting of a homosexual relationship between Zsolt and the hotel owner. Was that just my imagination or was that intentional?

CP: It was part of the geography of the character.

HtN: Good, so I wasn’t imagining that. Finally, since this is the only film of yours that I’ve seen, how does it fit into your own personal filmography? Is there any continuity between this and your other work, in terms of style or content, or is this something new and fresh for you?

CP: I think all my films are related in language and communication, but in the treatment of themes I think it is quite different. For me, I am happy with each movie that I make, in a way, and at the same time it opens another door. But stylistically, this is quite different.

HtN: I look forward to watching your other films, then, to see how they compare! Thank you so much, Corneliu. I really enjoyed the film.

CP: Thank you very much!