I met with director Mike Ott and his principal subject, Cory Zacharia, on Sunday, March 12, 2017, at SXSW, to discuss his hybrid documentary feature, California Dreams, which follows an eclectic assortment of five residents of the “Golden State” as they fumble their way forwards towards very aspirational goals. With a combination of staged scenes and real observational footage, as well as interviews of the five main characters as they audition to be in the film, it’s an original way to make a movie, for sure, and utterly absorbing. Here is a condensed digest of our conversation.

Hammer to Nail: So, why make this film in this way? It’s a documentary, but it’s not a documentary. Real people, staged situations. Conversations that wouldn’t have happened without your film. Describe your process.

Mike Ott: Well, I think there’s this wave in documentary filmmaking, which I find super boring, this kind of VH1 behind-the-music thing where it’s like talking head, then cut to b-roll of what the person’s talking about, and I feel like the art of documentaries has been lost, in this way. I find this kind of stuff…my grandma can make that movie. She could learn how to use Final Cut and talk about being in the hotel and get footage of the hotel. And so the process for us was that I really wanted to stay clear of doing any kind of talking-head interviews, besides the auditions, and the process of the conversations in the car came about from another movie I was making where Cory was talking to another actor during break, between scenes, and that’s when he told this kind of fantastic story about the first time he had sex. So the process was all these different things I was interested in coming together at the same time.

HtN: So, along those lines, let’s follow up with Cory. Cory, how did Mike pitch the film to you? He holds these auditions, you show up, and it’s such a great way to open the film. How did Mike then pitch, “Hey, Cory, I want you to star in this hybrid documentary I’m making”?

Cory Zacharia: Well, I’m like best friends with Mike…I’ve known him pretty much 10 years now, so with any movie idea of his, I’m in. I like to do movies. So, he really doesn’t need to convince me that much, but I think how he ropes me in is by saying things like, “I’m thinking of this movie idea, and we’re going to call it Sex, Drugs and Rock ‘n Roll,” and I’m like, “What? That’s cool!” And then all of a sudden the name winds up getting changed. It’s still a good name, but that’s kind of how he pitches it to me. (turning to Mike) But it is really nice that you make me the main actor, because this the third feature that we’ve done, where I’ve been the main lead. So he really just has to come to me with an idea and I’m like, “Well all right, let’s do the movie, then, as soon as we can!”

MO: I think when we started, though, we didn’t know what we were going to make.

MO: I mean, it was kind of like, come in to audition, and of course he’s always the most interesting person. But the first thing we shot, I think, was his The Outsiders monologue, and from there we didn’t really know how much we were going to focus on each person, you know, or who we were going to follow.

HtN: So how did you advertise your auditions to get these other people to show up?

MO: Well, you see, that was the trick. We’re near L.A. and I didn’t want a bunch of cheesy actors who aren’t working who are going to look me up and see that I’ve made a film and so come just because of that, not that they know who I am, or anything. I didn’t want a bunch of handsome dudes, or women with fake boobs, so we did dive bars, grocery stores, liquor stores, where we put up things. I think that Nicole [Arbusto], our casting director, did some stuff on Craigslist, and that was kind of the hard part, finding these interesting characters, because we really wanted people who’d never had the chance to act and never had the chance to do anything.

HtN: The categorization doesn’t matter, but still, people like to have a sense.

HtN: So, what did they think they were doing?

MO: I don’t totally know, because again, when we were making it, we didn’t totally know what we were doing. We were kind of literally coming up with ideas the night before. We’d shoot one night and say, “Maybe tomorrow, we should do something cool about x, y and z, and try to figure it out.” So, honestly, I don’t know what they think it is. It’s going to be really interesting for them to see it. Cory’s seen it, and I sent it to Patrick [another subject], but I haven’t heard back from him, yet, if he’s watched it. I showed Carolan [another subject] the trailer and she sobbed, uncontrollably, saying, “Thank you so much for telling my story.” And I think that K-Nine [another subject] – the “Dog the Bounty Hunter” guy – will love it. He loves performing. 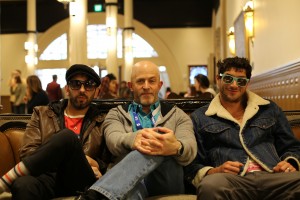 HtN: Yes, he clearly loves performing. So Cory, how do you view this film? Do you see this as sort of a fictionalized version of your life or a documentary about you? How do you see the film portraying you?

CZ: That’s a really good question. I think a lot of it’s real life. I think some of it is a little made up, but I think a lot of it’s also true. You know, this is what I say to people: “Think of it as you may. If you think it’s real, then honest to God believe it’s real. If you don’t…” You know, I really want people to figure it out for themselves. I don’t really want to have to tell them, because it is kind of a personal movie, too, at the same time.

HtN: So, not that it matters, but I’m curious, the whole German angle, is that made up?

MO: No. He actually got the offer. Henning was this crazy German dude I met when I was in Vienna at the film festival, and we became quick friends and hung out for a week, and I said to him, “Hey, if you ever come to L.A., you can stay with me.” And he was like, “Really?” That was Friday, and he showed up on Monday.

MO: He stayed with me for another two weeks. He and Cory met. And before he came, he said, “I’m writing this movie, and I have this part for this…it’s gonna take place in Berlin,” and there were like these four guys, and one of them was this stoner American who didn’t have a job, and was bumming cigarettes and weed from everyone else. And I was like, “I think I may know the right person for you.” (laughs) And so Henning and Cory meet, and they were just like instant friends.

MO: And Henning was pitching the movie to him this entire time, so that’s where the idea came from.

HtN: So, Cory, did you go to Germany, to film with him?

CZ: Yes. Oh, no, we haven’t done that movie yet, but I did wind up going to Germany.

MO: It got pretty meta!

HtN: And that was your first time abroad, right?

HtN: How was that experience?

CZ: It was amazing! It was really cool. We had a great time. Almost like Texas. I was telling Mike earlier, it’s just a completely different world and place. You don’t hear English as much as you think you’re going to hear it.

CZ: No, it was really amazing, and I would definitely like to go back.

HtN: But that film hasn’t been made yet. Interesting. So, how many people did you end up auditioning, Mike, beyond the four beyond Cory? 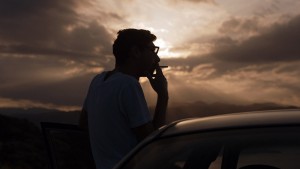 MO: We didn’t know if we had enough people, though. We wanted to get some more women. It was just really hard to find interesting people to come in.

HtN: Right. So, in the press notes, there’s info about Cory’s background being raised as a Jehovah’s witness, as well as more info than what you share in the movie about his first sexual experience, etc., and that’s in your press notes, so you clearly want us to know some of that, but not all of that is in the film. How did you choose what to put in the film and what to leave out, about Cory?

MO: Well, I just put in everything that I thought was interesting. With all of the sections, I just put in something that I would want to watch. But, you know, I think Cory comes from a really interesting place and I think there’s a lot going on. For me, I think the scenes with his mom are my favorite, because she’s such an incredible performer. And I was confused as to whether she was even…because when we rolled the camera, I walked out and she just started. I didn’t tell her anything. I thought I was going to have come in and give her some kind of direction, “OK, talk about this,” or “Give him a hard time about that.” But she was just on. (turns to Cory) You guys have such great chemistry.

CZ: Oh, I know! That’s why it was really good you used her in the movie, for sure.

HtN: And “The Dog” is an interesting character.

HtN: And those are the scenes where you are most obviously staging, right? Because you could watch the film and be lulled into thinking you’re just watching real conversations between people like Cory and Patrick. And by the way, speaking of those conversations, let me just say that I love your locations.

HtN: Just really beautiful. But then we get the stuff with “The Dog,” and that obviously…like you’re in the diner and the camera drifts right and then suddenly he’s running at the window. His scenes feel the most artificial.

MO: Totally! But in a way there’s this artificialness to him because he’s always being someone else. And also I think part of it was giving them all a chance to have their moment of their dream. Patrick gets to have his first lap dance, and Neil [another subject] gets to do some of his poetry and his writing, and Carolan gets to give her Oscar speech, and Dog gets to actually play Dog for a little bit.

HtN: That’s a good way of framing it. That makes total sense. You are being true to each person’s character. And Cory gets to go off to Germany to live his dream.

MO: He gets to go off to Germany, and I get to have my favorite performer in the movie, Mark Borchardt [subject of American Movie], as my own kind of dream come true.

HtN: Who was he in your film?

MO: He was the taxi driver at the end.

HtN: Well, great! I really enjoyed your film. Thanks for making it! 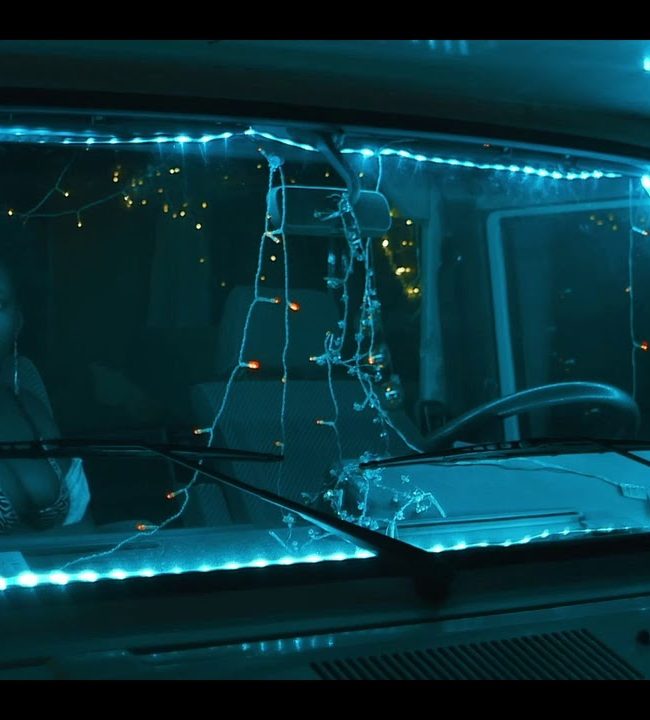