(The 2016 Seattle International Film Festival kicks off May 19 and runs for just shy of a month, until June 12. We will have coverage throughout the fest so keep your eyes tuned to HtN!)

Mermaid stories have never been the most feminist of folktales. They’re either presented as evil temptresses with the sole intent of luring men to their doom, or as lonely creatures who are themselves drawn to land by a strange man, never hesitating to give up everything to be with someone who barely registers their existence. Polish horror rock opera, The Lure, is a bit of both, but with some extremely creative motifs and appropriately alluring imagery to make the more misogynistic aspects of being a fish lady more palatable.

For the film’s setting, first-time director, Agnieszka Smoczynska, was inspired by something very specific to her youth. Dancingu (“Dancings” in English) were restaurant/night club hybrids popular in the communist twilight years of 1980s Warsaw. The protagonists of The Lure are a family who comprise the house band of one such club. In a reversal of roles, the bass player/son, Mietek (Jakub Gierszał), draws a pair of mermaids to shore with his song. They sing back to him, asking for help to come ashore, with the menacing promise, “We won’t eat you, dear”. Once they dry off, their long, eel-like tails become legs and they can pass as human. They say their names are Silver (Marta Mazurek) and Golden (Michalina Olszanska). Despite initial reservations, the family matriarch (Kinga Preis) is charmed by their childlike appearance and takes them in.

At the behest of the club’s sleazy owner, the girls join the family band, singing backup in topless mermaid form from inside a giant martini glass on stage. The new act is dubbed “The Lure,” and it understandably draws massive crowds. But there are two lust-fueled complications. Silver falls for Mietek and, as a punk merman who fronts another club act explains, Hans Christian Anderson rules apply. If Silver’s love remains unrequited, and Mietek marries another, Silver will turn into sea foam the following day. Golden’s lust is of the blood variety. While both girls sprout piranha teeth when angered, only Golden is constantly tempted to sink them into the necks of anyone who can’t keep their digits out of her fishy parts. (In case you were wondering, Smoczynska answers the age-old mystery about the logistics of mermaid sex). 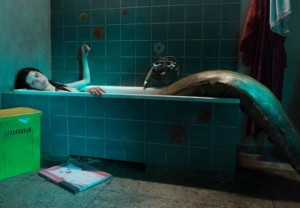 The songs are plentiful, alternating between club performances and true narrative musical numbers. The music itself is a lot of fun and sounds true to the era, running the gamut from early-1980s disco to goth electronica. But trying to make sense of the bizarre lyrics detracts from the experience. The lyrics bounce from fishy puns to vague platitudes to non-sequiturs to complete nonsense. Part of the blame could lie in the clearly non-literal translations (subtitled song lyrics shouldn’t rhyme). It’s best to ignore them and let yourself get swept away by the haunting visuals and score.

The creature effects, set and costume design, and show-stopping choreography are what make The Lure so compelling. Smoczynska’s mermaids are incredibly well realized. She struck – ahem – gold with Mazurek and Olszanska. The actresses are decidedly Pre-Raphaelite in appearance – pale, girlish faces, budding breasts, and long, unkempt hair. Their movements are graceful and gliding. They maintain a hint of cold-bloodedness, even when they are trying their best to be tender. Their long, black, eel tales are simultaneously enthralling and unsettling. Though the tails become legs when the girls are dry, they can never be completely human because of their Barbie doll crotches and hilariously fused butt cheeks. Though amphibious, prolonged dryness is detrimental to their health. They communicate with each other about their unsavory urges through a series of fish sounds (and, curiously, the occasional ocean wave).

Their “otherness” is constantly evident. As Mietek harshly tells Silver, “To me you’ll always be a fish.” And just so there’s no ambiguity, he adds, “an animal, that is.” This heartbreaking bigotry is one of several themes I wish Smoczynska had explored further. She also lightly touches on unrealistic beauty standards, teenage sexual autonomy, and exploitation. But just when you think she’s going to let loose, she changes the subject. There is certainly a powerful social allegory to mine from mermaid lore and I would love to see someone tackle it. The Lure isn’t that story. But it sure is cool.