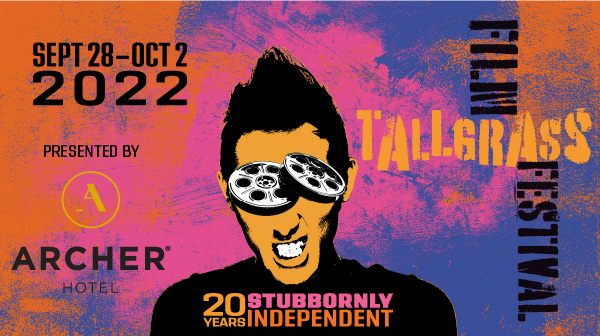 HtN contributor Melanie Addington is also the Executive Director for the Tallgrass Film Association which puts on the Tallgrass Film Festival which just celebrated it’s 20th fest September 28-October 2. Melanie sent along a list of winners from the fest and added, “with our 20th film festival, Tallgrass had an exciting mix of winners from around the world and the effervescent Lloyd Kaufman as our “Ad Astra” award recipient. We are so honored to play a small role in these films journeys as they continue to expand their audiences!” Winners are listed below…

Grow Kansas Film is a coalition of film professionals that came together this year to support the film industry through advocacy & education around film-friendly legislation in Kansas. They will join Tallgrass in advocating for the reinstatement of Kansas’ statewide film incentive. This important economic development program will make Kansas competitive for film and television work resulting in millions of dollars spent in our state, jobs, and workforce development in an expanding field. Learn more at https://www.growkansasfilm.com/

Also, in attendance this year at the awards was Floyd Gruver, the father of founder Tim Gruver.  Tim Gruver unexpectedly passed away in 2005 after creating and inspiring the festival. Floyd Gruver helped present ceremonial plates to Lela Meadow Conner and Eric Moore, co-founders with his son, for their roles in keeping the festival going.

“We were honored to celebrate Tim Gruver, Lela Meadow Conner and Eric Moore this year at the festival,” said Programming Director Andre Seward. “Tim would be proud to see the diverse and exciting talent from this year and how the festival has grown but remained stubbornly independent.”

Outstanding Cinematography:Winner: It is In Us All Director of Photography Piers McGrail

Outstanding Animation:Winner: Everybody Goes to the Hospital directed by Tiffany Kimmel

Outstanding Rising Star:Winner: How to Date While Trans starring and directed by Nyala Moon

Outstanding Performance:Winner: Tatiana Harman from The Girl at the Motor Hotel, directed by Garrett Detrixhe

Excellence in the Art of Filmmaking:Winner: Klondike directed by Maryna Er Gorbach

The EDA awards are a partnership with the Alliance of Women Film Journalists and highlight female talent behind the camera. Named in honor of AWFJ founder Jennifer Merin’s mother, Eda Reiss Merin, a stage, film, and television actress whose career spanned more than 60 years and one of the founders of Aftra and led the movement to pair Sag & Aftra.

Jury statement: The essential contributions brilliant women have made to the U.S. space program have been left to languish in the shadows for too long. The filmmakers, artists, and storytellers bringing those stories into the light deserve our appreciation. Kudos to director Sarah Moshman for introducing us to astronaut Anna Fisher, who in the 1980s became the first mother in space. Inspired by Dr. Fisher’s true story, Moshman’s short fiction film depicts the NASA mission specialist as an ambitious scientist who doesn’t hesitate to accept her dream mission, even when it is offered to her 8 1/2 months into her pregnancy – and who steadfastly pursues her dream, even when others try to dissuade her with a hefty dose of mom guilt. Emmy-nominated performer Lauren Lapkus has proven she can quickly make an impression with her turns n Orange Is the New Black, The Big Bang Theory, Jurassic World” and more. She’s quietly terrific in this short film that could easily be expanded into a full feature. From being referred to as a “lady astronaut” to being asked if her daughter would forgive her if she died on a space mission, Dr. Anna Fisher has more hurdles to leap over than training in zero gravity. The casual sexism of the 1980s is jolting but is a glimpse at how far we’ve come.

Jury statement:  An incredible and insightful documentary that doesn’t condemn faith-based religions like Christianity with the LGBTQ community but instead embraces the duality of living a life of pride as someone who is queer and has faith-based beliefs. It was heartwarming, informative, and impactful in its message. The film is a beautifully crafted extension of the short doc Trans in America: Texas Strong that first introduced us to the striking young trans girl Kai Shappley.  She’s even more compelling in Mama Bears, and her own personal battle for trans rights takes on powerful emotional dimensions as we share the stories of other gay children struggling to find acceptance with support from their parents. There are heart-wrenching moments and battles won and lost.  While Daresha Kyi’s film doesn’t suggest easy solutions, it never wavers from a positivity that things may change.  And that’s worth a lot.

In collaboration with the Ulrich Museum of Art, our new film category is for Spanish contemporary cinema, Murmurations—a celebration of the enduring connection between Spain and Kansas exemplified by Miró’s Personnages Oiseaux.

Jury Statement: Finlandia honors the experiences of people who are often unseen and disrespected, recognizes human resilience and interconnectedness across potential barriers, and engages the viewer in its interrogation of identity, desire, and what it means to be true to oneself.

Jury Statement: Restoring Néške’emāne reflects on Native history in Oklahoma, documenting the ongoing process of reclaiming land from the Cheyenne-Arapaho Boarding School to create a space for collective healing and to sustain and inspire new generations.

Jury Statement: Video Visit‘s portrayal of Brooklyn Public Library’s efforts to connect Rikers Island inmates with their loved ones via free video calls reminds viewers of incarceration’s toll on real people and natural communities and the need for compassion in challenging circumstances.

The Female Filmmaker and Documentary Jury included Faridah Gbadamosi, Victoria Gayer, and Mye Hoang. To qualify for the Winner of the Female Filmmaker Spotlight Award, the film must be a female identifying-directed feature without traditional, theatrical, domestic distribution at the time of the festival screening.  The winner received $5,000 sponsored by Fidelity Bank.Winner: Our Father The Devil directed by Ellie Foumbi

Honorable mention from the jury for best documentary feature:Winner: The Art of Rebellion, directed by Libby Spears.

Jury Statement: “We chose this because it had a clear story that was filled with humor and magical realism. It made us laugh while also appreciating the technical powers used to bell the story.”  (I don’t know what bell the story means.”

Vortex is a category for all animation, experimental, or hybrid projects. Our Kansas & Vortex Jury: Sara and Charity Harmon, Alex Liu and Cheri Gaulke.

Honorable mention from the jury for Vortex:Empire of My Melodius Mind directed by Jeannette Louie.

A Body is a House of Familiar Rooms: An ethereal yet grounded mixture of techniques that breathes magic into real-life struggles, the film left us not only with a lasting impression of two artists in love but also just wondering how the hell did they make this.

Jury Statement: Searching for La Yarda: A captivating reveal of an largely unknown part of Kansas’s past, the film’s use of oral tradition is a simple and effective example of the power of documentary film to move audiences to understand our history as a nation.

Jury Statement: Vegan Apocalypse: Absurd in the best way possible, this surreal satire of our current culture uses every filmmaking tool at their disposal to craft a clear, compelling world. This comedic take is worth a rewatch, even if hits a little too close to the bone.

Jury statement: It Starts with a Horse: An unusual, surprising, striking look at a complex character — the film unfolds like a series of musical movements — with lyrical animated flashbacks that immerse you into a world of romance, danger, and small-town politics.

The jury for GORDON PARKS was made up of Tamara Mariam Dawit, Robert Daniels, Sean Armstrong, and Gordon’s son David Parks.

Honorable mention: Our Father the Devil directed by Ellie Foumbi.

Jury Statement: “A musical act of love transformed into a work of art into a new medium, this riveting DIY extravaganza is nothing if not stubbornly independent.”

Tallgrass Film Association entertains, educates, and inspires audiences in the Wichita community and beyond by showcasing the best of independent films from around the world through an annual 5-day film festival, year-round special screenings, filmmaking competitions, and filmmaker labs. We strive to preserve the cultural tradition of film as a communal adventure. Movies bring us together: they entertain, spark conversation, build community and forge new relationships.