An Afternoon with Molly Shannon 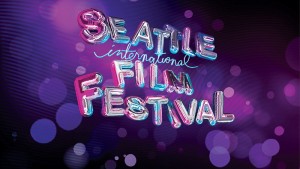 (The 2016 Seattle International Film Festival kicked off May 19 and runs for just shy of a month, until June 12. Reviews are coming in steadily but here’s the rundown on the fest’s special event “An Afternoon with Molly Shannon.”

Molly Shannon is a Superstar. Maybe not in the same way that Beyonce or Lady Gaga are Superstars – she’s not an ethereal, looming presence, so much as an awesome person who also happens to be a tremendously gifted comedic and dramatic actor. She first gained notoriety in 1995 when she joined the cast of Saturday Night Live, where she remained for 6 seasons. During that time, she introduced the world to such indelible characters as Mary Catherine Gallagher (“When I get nervous, I stick my hands in my armpits and smell ‘em like this”) and Sally O’Malley (“I’M 50!”). Her characters were hilariously offbeat, but also oddly inspirational because of their unwavering drive and confidence.

On Sunday, May 22nd, the Seattle International Film Festival presented “An Afternoon with Molly Shannon.” After a brief retrospective of her work, (including clips from film and television comedies like Superstar, Wet Hot American Summer and Seinfeld, and comedic dramas like Me, Earl, and the Dying Girl and Addicted to Fresno), Variety deputy awards and features editor Jenelle Riley introduced the effervescent actress, who revealed that she was fulfilling a childhood dream by sitting in front of a large audience, answering questions whilst sipping a hot beverage from a mug. “Sorry, your drink is cold,” Riley apologized. Even Molly Shannon can’t have everything.

Riley began at the beginning, asking Shannon about her childhood. She grew up in Ohio, raised by a single father after her mother passed away when she was 4. Her father introduced her to the stately women of old Hollywood such as Bette Davis and Elizabeth Taylor. Shannon fondly recalled her father, who, under the influence of amphetamines and nicotine, would make the house spotless as Judy Garland belted out her iconic tunes. The acting bug bit Shannon when her father introduced her to classic films full of dramatic monologues. It was not, she revealed, unlike Mary Catherine Gallagher’s living situation in Superstar – the 1999 film based on her SNL character. Only, instead of watching movies and performing routines for her grandmother, it was for her father. (She, in fact, modeled many female characters after her father, including the exuberant Quinquagenarian, Sally O’Malley). Shannon was a bit of oddball, but had such tremendous, unconditional support from her father that she never had any doubts about herself or what she wanted to do with her life. 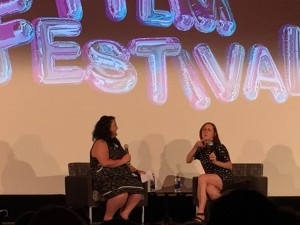 Shannon spoke with fondness, reverence, and humility about her career and opportunities over the years. She used an initial rejection from SNL to hone her craft for five years, before getting the opportunity to showcase her work to them on her terms. During that time, she sunk all of her own money into her show, inviting anyone and everyone to come. She even brought in homeless people from the streets of Santa Monica to not only fill the seats, but also to give them entertainment they couldn’t otherwise afford. She made the difficult decision to leave SNL after 6 seasons because she wanted to go out on a high note.

Since then, she’s had memorable roles both recurring and one-off on dozens of TV shows including Will and Grace, Bob’s Burgers, Enlightened, and Glee, plus my personal favorite, as the lovelorn art teacher, Gale, in Wet Hot American Summer (both the film and Netflix series). Last year, she received universal acclaim for her portrayal of Denise, the mother of the titular girl in Me, Earl, and the Dying Girl. Her latest film is “another indie cancer movie,” called Other People. In the semi-autobiographical tragic-comedy written, and directed by Chris Kelly (writer for SNL and Broad City), Shannon plays the terminally ill mother of a New York-based comedy writer who moves home to be with her and his family during her final months. Be forewarned, this isn’t some Hollywood-style cancer melodrama. Things get ugly and very, very real. You’re probably wondering where the comedy part comes in. But despite the fact that you should definitely bring a whole box of tissues with you, Other People is loaded with laugh-out-loud moments, many of which come from the dying girl herself, Molly Shannon.

In her early career, Shannon met with the usual setbacks – bad auditions, scraping pennies together, waiting tables to make ends meet – but she never let those things get her down or cloud her ambition. Some relentlessly ambitious actors only survive because of their ego, and break a few eggs on their way to making their omelet of fame. But somehow, Shannon managed to remain graceful and humble throughout the experience, never stepping on any heads to reach the next rung. She credits her father’s influence for her perpetual optimism. But she also exudes incredible empathy and kindness. She didn’t even get upset when an audience member asked her age. To his credit, he was attempting to get her to break into her Sally O’Malley character, by swinging her legs wildly and shouting, “I’m 50!” Some audience members didn’t pick up on this, and gasped in horror at the inquiry. Molly Shannon just smiled sweetly and said, “I would tell you if I weren’t wearing a dress.”

A Conversation with Jonathan Wysocki (DRAMARAMA)