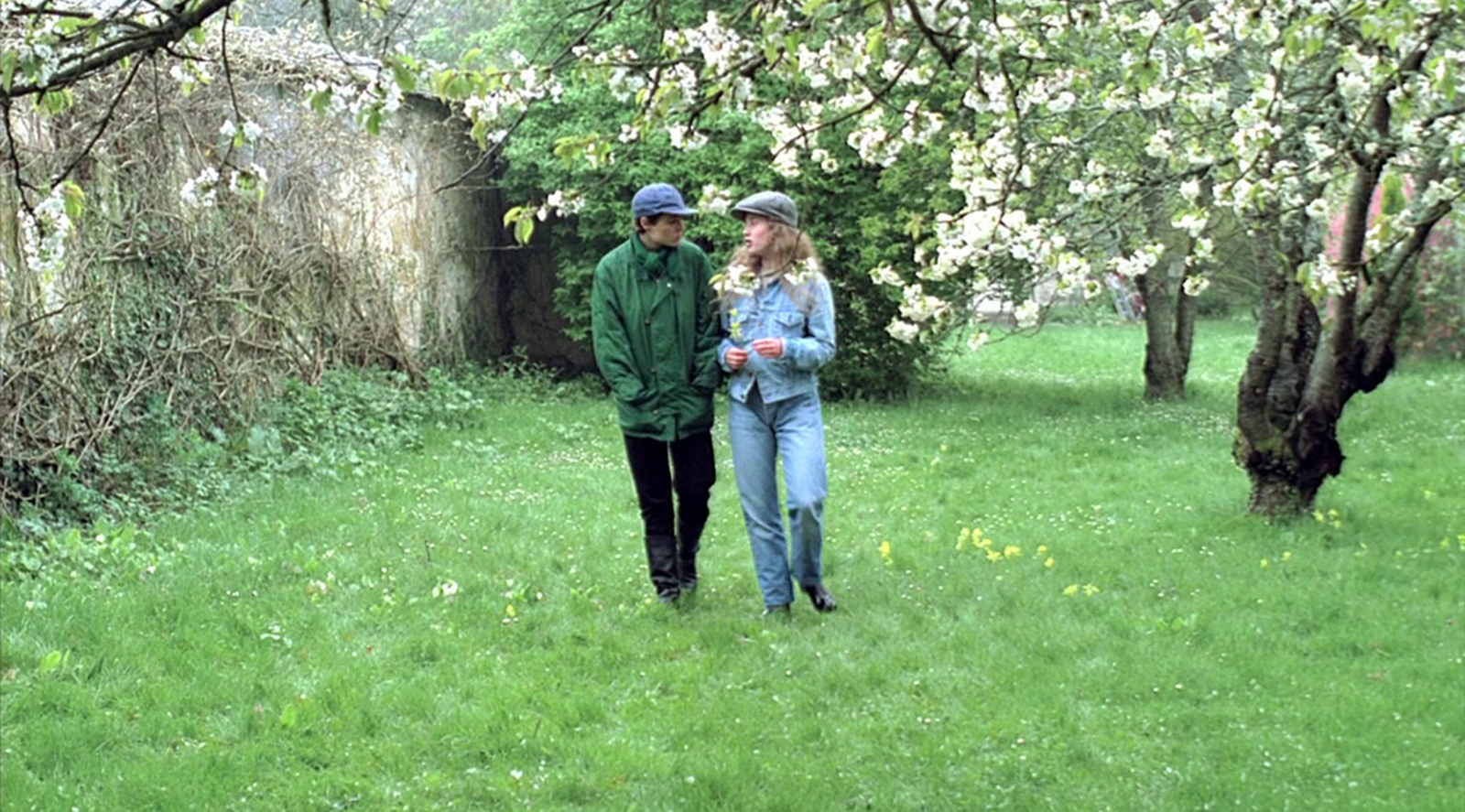 Films du Losange has restored all four films in Éric Rohmer’s Tales of the Four Seasons. Film Forum will present the restored versions of the French New Wave auteur’s Seasons cycle in order of their original release on consecutive Fridays starting on March 26. The 2k restoration has sharpened the image resolution, allowing the viewer to appreciate Rohmer’s cinematic vision – the films were shot in a span from 1989 to 1998.  The colors of the seasons, sea, and flowers – there is perhaps no director more obsessed with capturing flowers than Rohmer – are intensified by the restoration. We can now feel fully immersed in Rohmer’s picturesque world of French town and country.  Given the rough 2020 and 2021 France and the world have lived through, it is a welcome immersion; a Rohmerian world of casual strolling, intimate talks at cafes, summer vacations in beaches thronging with families, and youth following the call of their libidos.

Philosophy teacher Jeanne (Anne Teyssèdre) makes conversation with Natacha (Florence Darel) at a party. Jeanne is not thrilled with her current boyfriend and Natacha abhors her father’s much younger girlfriend. Natacha is so enchanted with Jeanne that she decides to set her father up with Jeanne. Natacha convinces Jeanne to stay in an empty room in her father’s place. It does not take long until Jeanne, Natacha, her dad, and his girlfriend all end up under the same roof. Natacha and her father’s girlfriend argue, and Jeanne’s feelings of awkwardness transform her calm demeanor. Throughout the course of the film, the characters are quite open about their feelings, their desires, and their contradictions. The contradictions between what they say and how they act, and their constant vacillations, make them the film equivalents of Dostoyevsky characters.

Félicie (Charlotte Véry) is a hairdresser who years earlier had a passionate fling with a man. On their final day together, she gives him her address.  She mistakenly gives an incorrect address and does not see him again. Five years later, she is in two tepid relationships with two different men. Both men are stopgaps. She clings to a faith that one day she will be reunited with the man with which she had a passionate fling. It is as if Félicie leads different lives with each of these men, as if she is living through a series of reincarnations. This cycle of lives, the flightiness in her personality, will find grounding once she finds her previous fling. This was no mere fling. As Félicie poetically puts it, “There’s love and there’s Love.”

A young mathematician/musician, Gaspard (Melvil Poupaud) arrives in Brittany where he awaits the imminent arrival of his girlfriend. He strikes up a friendship with a waitress/ethnologist named Margot (Amanda Langlet). Margot says she only wants a friendship with the loner Gaspard, but her flirty actions contradict her words. A few days later, Gaspard meets Solene (Gwenaëlle Simon). Solene knows Gaspard has a girlfriend and pushes him to break with his girlfriend and commit to her.  Eventually, Gaspard’s girlfriend arrives in town. It is with Margot, however, that his conversations are most open and existentially profound. He reveals to her that at times he feels as though he does not exist.  Margot also shares with him her uneasiness. She has a boyfriend, but obviously likes Gaspard. She is afraid that she may be no more than a “substitute.” A series of events leads Gaspard to make plans with all three young ladies. Rohmer captures individuals in the midst of their flowering youth and chronicles how that youth is shaped by love’s twists and turns. 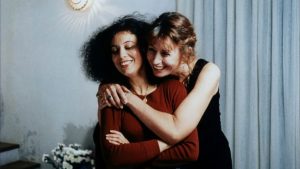 A Shot from Rohmer’s “An Autumn Tale”

Magali (Béatrice Romand) is a middle-aged widow who tends to her vineyard. Her best friend Isabelle (Marie Rivière) senses her friend’s loneliness and convinces her to get back into the dating scene. Magali’s son’s girlfriend also wants to set Magali up with someone she was previously romantically involved with. Things get quite complicated when Isabelle becomes attracted to a man she originally wanted to set Magali up with. The film is a kind of Shakespearean comedy with all the characters involved being quite laissez-faire about their romantic desires and machinations while moments of mistiming lead to amusing misunderstandings.

All four films are snapshots of young and middle-aged people navigating through love’s choppy waters. Regardless of the season, Rohmer arranges flowers on the screen – on paintings, on dresses, on blouses, in the fields, in vases, and even on wallpaper. Rohmer pulls off the ultimate trick in The Tales of the Four Seasons.  He makes films about love that feel escapist but are far from being escapist. If there is an American equivalent to the The Tales of the Four Seasons, it would have to be Linklater’s Before Trilogy. Like Linklater’s films, Rohmer’s strength lies in the dialogue he gives his characters. The dialogue is breezy, relaxed, and then takes a turn toward the existential, the intellectual.  Characters may be talking about setting up other characters on a date and then shift toward Plato or Kant. Romance in American films is usually handled clumsily; it is infantilized. If you allow Rohmer’s films to linger in your memory after viewing, new realizations come to you. In the same way that horror films offer sociological and political subtextual commentary on the times in which they are made, Rohmer’s romantic films offer a political and economic commentary. Plot lines involve philosophy teachers working in working class neighborhoods, individuals allowing others to stay in a room without charging rent, young people taking on careers not because they pay more but because they allow them more free time to pursue their interests, and characters tending to their vineyards not out of a profit motive but instead a craftsmanship motive. Perhaps Rohmer is telling us something about the motives behind his filmmaking, his conviction, his life.  Rohmer’s craft is indeed multilayered.