(Tomer Almagor and Nadav Harel’s documentary King of Beasts is a fly-on-the-wall approach to big game hunting. The film is available now on DVD and all streaming services.  Like what you see here on Hammer to Nail? Why not pay just $1.00 per month via Patreon to help keep us going?)

It’s nearly impossible for a documentary to remain purely objective. Even without narration, the director is still choosing who to interview, what to film, and what to leave out in the editing room. The filmmakers still have a stance, whether or not they choose to reveal it to the audience. Nonetheless, Tomer Almagor and Nadav Harel come very close to presenting the subject of King of Beasts in an unbiased light. Their protagonist is Aaron Neilson, a middle-aged white man who makes more than a livable income as a hunting guide in the Colorado mountains. He leads a relatively simple life, and gives his girlfriend shit about how much she’s spending at the nail salon. Meanwhile, he’s planning his fourteenth trip to Tanzania so that he can add to his prodigious lion trophy collection. He kills plenty of other animals too, but lions are his passion. They’re the reason he spends thousands of dollars and flies 9000 miles. He reminds me of my daughter with her endless amassing of plushies. It would be amusing, were it not for the fact that his toys were once majestic living creatures. But he maintains that his hobby is misunderstood. They have to go to Tanzania and see it for themselves. Through this film, we can do just that. And guess what? It’s still not a great look.

Almagor and Harel offer all this without comment – there are no titles or narration in King of Beasts. It’s a true fly-on-the-wall account. Neilson tells the camera that he just wants a chance to show things from his side. The animal rights activists who admonish him on the internet haven’t met a lion up close. They haven’t felt the thrill and righteousness of knowing you’re at the top of the food chain. He respects the animals, he says. But it’s his god given right to take their lives. He’s not murdering Simba from The Lion King. These animals are nothing but natural born killing machines. On top of that, he’s totally helping the people of Tanzania by bringing them his tens of thousands of dollars.

After meeting Neilson at his home, he sets out on a 21-day journey with a hunting guide, a crew of indigenous servants, and his own videographer. They’re not glamping, but they’re not exactly roughing it either. The servants prepare their meals and handle all of the unpleasantness with the animals that Neilson doesn’t consider “part of the experience.” He frequently pats himself on the back for being so hardcore, whilst a taciturn black man brings him snacks and freshens his drinks.

And what of these silent servants? The white South African guide goes off on several rants regarding the state of the Tanzanian economy. “They criticize colonialism but everything they have comes from the Western World,” says the white colonizer. They wear “3 piece suits” (really?), drive to work in their cars, and use their cell phones. None of his employees complain to him, of course. And they never have anything bad to say to the camera either. But Almagor and Harel capture some long looks from the men. They wear their poker faces well, but they are spending weeks at a time away from their families, driving privileged Americans around the bush and catering to their every whim. I can’t imagine this is their dream job.

Later, when Neilson has gotten what he came for, the men sing and dance and celebrate. They exalt him while the guide fills out the paperwork to get paid. They crown him with toilet paper and carry him around on a makeshift throne. This is theater. This is Chuck E. Cheese for blood-thirsty right-wing nut jobs with too much expendable 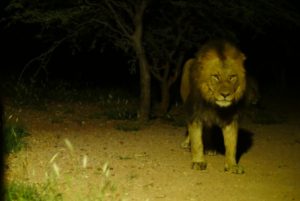 income. Neilson thanks them for sharing their culture in what he clearly thinks is a moving and enlightened speech. There is no way they’re not making fun of him behind closed doors. A person can be both your meal ticket and your oppressor. They are making the best of a system into which they were forced.

The film’s title is a sardonic double entendre. It refers to the lion, but also to the man who has deemed himself worthy of taking these “lesser” lives. On his journey, he also kills a hippo and an antelope to use as bait and food. He shoots the hippo in the water, and it takes several men to retrieve the animal. Before they drag the body ashore, Neilson jumps on the hippo’s back and pretends to surf. His photographer thinks it’s hilarious and snaps a picture. Neilson says he probably won’t put that shot on Facebook, and his photographer says that’s a” a damn shame”.

Be forewarned, there are several extremely disturbing shots. I’m an avid watcher of horror movies, but I still had to look away when the camera held on a man crouching next to a severed hippo head. Nothing is as brutal as the shots of the felled lion, as they examine his teeth, yank his head around by the mane, and pat him on the butt like he’s their favorite house kitty.

There are also some pretty cool shots of living animals. Days are separated by montages of hunting camera night-vision stills, featuring various nocturnal carnivores climbing trees to take the bait. In one of my favorite shots, two elephants notice the video camera and start kicking it with dirt like Sean Penn attacking the paparazzi.

Neilson gets plenty of time on his soap box but, as with most divisive documentaries, viewers aren’t going to be swayed to one side or the other. Hunters and animal lovers alike will feel validated by King of Beasts. One might never know the true feelings of Almagor and Harel were it not for some pointed facts about lion endangerment at the film’s conclusion. Despite the depleted lion population, Neilson has no remorse for his hobby. His short-sighted, myopic view is that the extinction of a species is just part of the circle of life. “I hate to see the wildlife lose,” he says. “But eventually they’re gonna be the loser because the people are gonna win.” Neilson thinks the true victim is humanity because they’ve been superseding their instinct. Why stop at animals then? Isn’t our greatest achievement the ability to rise above our base natures? Some people had to suppress the urge to kill and fuck in order to invent things.

“Man will determine the outcome of every living thing on this planet,” Neilson opines. He’s not wrong. But with great power comes… well, you know the rest.