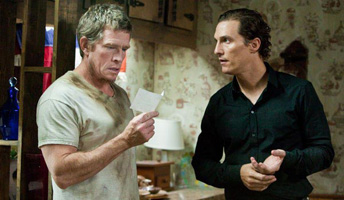 Killer Joe (Lionsgate) — As I get older with each passing year, I’ve begun to process the world—and, by extension, cinema—in a different light. While I’m not turning into an outright prude, I am becoming much less tolerant of art and entertainment that takes a condescending and contemptible attitude towards humanity. On an ethical, theoretical level, there’s no denying that the way to best appreciate and enjoy a movie like Killer Joe is to look down upon and get a hilarious kick out of all the underprivileged, uneducated, bad-decision-making redneck idiocy on display. Shocking violence and rampant stupidity? No thanks. But not so fast. In the case of William Friedkin’s second feature film collaboration with playwright/screenwriter Tracy Letts (the first was Bug), the complicated-to-swallow truth is that it is so well acted and spins into such outlandish directions that ethics be damned. As much as I want to say that I don’t approve of Killer Joe, I can’t do that. This movie is one seriously gonzo romp. Read my HTN review, then buy the Unrated Director’s Cut on DVD

Sleepwalk With Me (MPI Home Video) — Read A Conversation With Mike Birbiglia and Jacob Jaffke. Available on DVD

Jason Becker: Not Dead Yet (Kino Lorber) — The tragedy and triumph of Jason Becker’s life is the subject of a new documentary by first-time filmmaker Jesse Vile. Jason Becker: Not Yet Dead is as head banging as it is heart wrenching. The film is remarkable, accomplishing what many music docs strive for and frequently fail to achieve—namely, it reaches beyond the immediate fans and touches anyone who is willing to watch and, especially, listen. Its power lies in its simplicity and sincerity: Becker’s is a great, naturally compelling life, and Vile skillfully captures both the human and musical sides of his story. Read Cullen Gallagher’s HTN review. Available on DVD

Gandu (Artsploitation Films) — Inspired by both the visual energy of Gaspar Noe and the sexual energy of Lars von Trier’s The Idiots, Gandu displays a visual and aural energy that is rarely seen in indie film. Read Mike S. Ryan’s HTN review. Available on DVD

Our Beloved Month of August (Cinema Guild) — Available on DVD

The Words (Sony) — Available on DVD