(We here at Hammer to Nail are all about true independent cinema. But we also have to tip our hat to the great films of yesteryear that continue to inspire filmmakers and cinephiles alike. This week, our “The Curbside Criterion” continues where HtN staff can trot out thoughts on the finest films ever made. Today Brad Cook explores the new Blu-Ray release of Pan’s Labyrinth, the instant classic from Guilermo del Toro.)

Oftentimes when directors talk about mythology and fairy tales, they seem to be speaking more about the Disney-fied versions we’re familiar with, not the darker ones that were originally told. For Pan’s Labyrinth, however, director/screenwriter Guillermo del Toro dove deep into the past to come up with a haunting story reminiscent of the brothers Grimm at their best. It’s a tale that would have been told to children a couple hundred years ago but is now billed as “a fairy tale for adults,” with the appropriate rating.

Pan’s Labyrinth is set in Spain in 1944. Its protagonist is 11-year-old Ofelia, who has likely experienced her share of traumatic experiences living in a fascist country. After her father dies, she and her pregnant mother move to a mill occupied by the sadistic Captain Vidal and his small group of soldiers, who have been tasked with rooting out the guerilla fighters hidden in the nearby woods. Captain Vidal is the father of Ofelia’s unborn brother (Vidal is convinced it’s a boy, despite the lack of ultrasound technology in those days), and he handles his new family with the same cold command with which he leads his men.

Unbeknownst to Vidal, however, he has two guerilla sympathizers in his midst, along with a stepdaughter who has encountered a fairy and discovered a nearby labyrinth. There, Ofelia meets a faun who gives her three tasks to complete. Doing so will prove that she really is the reincarnation of Princess Moanna, daughter of the king of the underworld. One of her tasks, placing a mandrake root in a bowl of milk under her mother’s bed, seems to cure the woman of the complications related to her pregnancy. The others, however, are much more treacherous, and Ofelia must survive them by relying on her instincts. She comes to discover that perhaps she can’t completely trust her new magical friends, who have become her only refuge from Vidal. 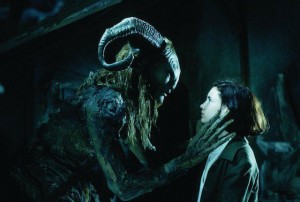 I don’t want to spoil the film, but I will say that Vidal begins to figure out what has been going on under his nose, setting off a chain of events that lead to an ending reminiscent of those aforementioned original fairy tales. In the process of telling this story, del Toro has managed to create a powerful piece of art that will leave you thinking about it for days afterward. From the well-crafted dialogue to the spot-on performances to the pitch-perfect main theme, it’s hard to find much wrong with this film. It’s a unique work in an industry that places too much emphasis on rehashing the same ideas over and over again, as if its artisans are making lawn furniture.

This new Blu-ray from Criterion has been released during the film’s 10th anniversary and sports a new 2K supervised by del Toro. It ports over most, but not all, of the bonus features found on the 2007 DVD and Blu-ray releases, so you may want to hold onto those discs if you have them. This edition also includes two new bonus features:

The hold-overs from past releases start with a one-minute introduction to the film by del Toro and a commentary track recorded by him in 2007. He begins by explaining how Pan’s Labyrinth is a companion piece to The Devil’s Backbone before leading into a discussion of his creative process. Del Toro is one of those directors who I’d call an “anti-Kubrick” – unlike Stanley Kubrick, he’s more than happy to spill his guts about his movies, laying bare almost every thought he puts into them and explaining how he pulls off his tricks. His commentary tracks are typically rich with insight, and this one is no exception.

Next up are four featurettes: “The Power of Myth,” a 15-minute piece that touches on del Toro’s conception of the film and how it fits into the pantheon of fairy tales; “Pan and the Fairies,” which lasts 30 minutes and explores how the film’s creatures were created; “The Color and the Shape,” a four-minute look at the film’s color design; and “The Lullaby,” another micro-featurette that discusses the movie’s score, including its central theme, which was meant to echo a lullaby. You also get the chance to hear the lullaby performed different ways in a brief companion piece.

Then we have “Director’s Notebook,” which shows us del Toro’s sketches and notes for the film, which stretch back to 1993. On some pages, there’s an icon you can click that takes you to a brief snippet of del Toro discussing a relevant topic. While it’s fascinating to look at del Toro’s creative process in that way, I would have preferred a more linear video piece that put all of the clips into a coherent discussion, with a separate option to look through the sketchbook pages one by one. 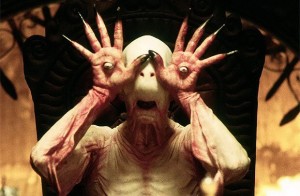 In the same “Director’s Notebook” section, we also get a chance to see comparisons between del Toro’s on-set daily thumbnail sketches, the polished storyboards, and the final film. Four sequences from the movie are presented, along with a special effects comparison that shows del Toro walking through the labyrinth with a green fairy figure on a stick, next to the final version. The final part of the “Director’s Notebook” area gives us galleries of creature design and production design sketches, along with a variety of behind-the-scenes photos.

Next, we have four comics that give us some back story on the film by focusing on the giant toad, the fairies, the Faun, and The Pale Man. Each one is presented as a traditional comic book page, except with moving graphics and accompanying sound effects. Captions that fade in and out explain the story. While none of the comics are crucial to understanding the film, they’re a nice way to get to know the world del Toro has created a little better.

There’s also an archival clip from 2005 featuring actress Ivana Baquero’s audition for the main role. I don’t recall it from the old DVD, so maybe it was on the 2007 Blu-ray, or perhaps the HD-DVD release.

The 2007 releases also had a 50-minute episode of The Charlie Rose Show that’s not included here. It featured del Toro and fellow Hispanic directors Alfonso Cuaron and Alejandro Gonzalez Inarritu. Perhaps it was left out because it doesn’t spend a lot of time on Pan’s Labyrinth.

Two theatrical trailers and seven TV spots round out the disc. The obligatory printed piece is a fold-out containing an essay by film scholar Michael Atkinson.