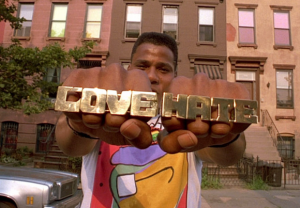 That the comedic first act of Do the Right Thing ultimately proves a setup for a decidedly unfunny climax is well-known, but the way this slow-burning development positions the film as an unlikely heir to The Rules of the Game is of special note. Tragicomic elements are present in more movies than immediately come to mind, but the progressions from one to the other in these two are so subtle as to seem abrupt when they at last come to a head in the sort of moments so powerful as to retroactively alter one’s perception of each film as a whole. Subsequent reflection (and viewings, which both films require) will make it clear that the two stories are infused with such palpable tension as to make them feel on the precipice of disaster from their first frames—which, really, they are. Do the Right Thing erupts in a riot whose intricacies are still being debated today, while The Rules of the Game‘s setting on the verge of World War II makes its tragedy all the more prescient. The closer one looks, the clearer it becomes that neither film is much of a comedy at all, first impressions notwithstanding.

Though presented in markedly different ways, both also share a focus on class issues: Spike Lee shows the struggles of the poor on a sultry summer day in Brooklyn; Jean Renoir depicts the decadence of the French bourgeoisie. (Even the most well-off character in Do the Right Thing would likely be a servant in The Rules of the Game). Too, the biting manner in which the two directors present this central concern immediately mired them in controversy: Renoir’s film was banned by the French government and critics protested Lee’s upon its release. But what truly links the two is their use of–and places in–history. Though brilliant in and of itself, The Rules of the Game—which, to me at least, is the best of the handful of films most often cited as being among the greatest of all time—takes on special meaning given the already-mentioned proximity of its release to World War II, which acts as a sort of extratextual answer to questions Renoir raises with his film. The entire estate on which the film is set was likely later occupied if not razed entirely, delivering a fate not unlike those of the animals hunted by the men in an oft-noted and beautifully sad hunting sequence. If Renoir’s film is made richer by history, Lee’s is infused with it, built on it. Martin Luther King, Jr. and Malcolm X (among others) are invoked by name, picture, and, finally, postscripts which are seemingly at odds with each other: Where the former denounces violence in all its varied forms, the latter speaks of its occasional (and unfortunate) necessity–whereas The Rules of the Game, in a final note of sad, unintended irony, never seems to question it at all.

***Stream THE RULES OF THE GAME and DO THE RIGHT THING at Netflix Right Now.***