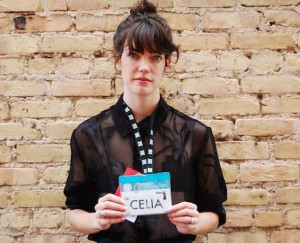 (“Digital Gods,” Nick Toti’s outstanding series on underseen digital films and filmmakers continues with a deep dive into the amazing work of filmmaker, dancer, choreographer and all around unique individual, Celia Rowlson-Hall.)

Celia Rowlson-Hall is the kind of person that you want to see succeed. The first thing that draws you in is her odd beauty. It’s a bit androgynous, perhaps resistant to the type of exploitation female performers are expected to allow, but no less striking for its idiosyncrasy. In person, she is a bit anxious but always focused and friendly. In her work, she is confident, playful, and energetically infectious. You want to be her friend. Watching her movies, you feel like maybe you already are her friend.

There’s a chance you’ve been exposed to Rowlson-Hall’s work without realizing it. She’s collaborated with big-name creatives like Lena Dunham, Alicia Keys, and Gaspar Noé. Her for-money work is primarily as a choreographer, but between these paid gigs she has also carved out her own space in the independent cinematic ecosystem. I’m not the first person to write about her directorial work, so this piece will not pretend to be breaking new ground. Instead, I’ll be focusing specifically on those aspects of her work that fit within the context of Digital Gods. It’s worth noting, though, that all of her work, whether as director, choreographer, or performer, is part of an integrated whole. Her “voice” comes through clearly, even when, in a literal sense, it’s hardly ever heard.

Rowlson-Hall is a dancer. Her ongoing project is concerned with the possibilities of dance as a cinematic language. Her work is an extended exploration of the elegant potentials of the human body. Often this body is hers, sometimes it isn’t. She works alone, with partners, and sometimes with large groups in which she might have passed unnoticed if you didn’t already know her. The problem with charisma is that it can’t be hidden, no matter how skillfully she manipulates her own body or attempts to dissolve into a crowd. Celia Rowlson-Hall always comes through, unmistakably, as Celia Rowlson-Hall.

Her videos have a superficial sweetness. Often this sweetness is manifested literally in the form of sugar, candy, or various other desserts. There is also the bubblegum pop the typically stands in for dialogue, the brightly colored costumes and sets, and the insistently smiling faces of the performers. But this sweetness reveals itself as one of her many playful masks. There is also a darkness to her work, but these darker concerns remain under the surface, occasionally bubbling up with imagery hinting at loneliness, confusion, lust, and bursts of violence. If you don’t immediately spot these themes, keep watching and they’ll surely out themselves in time.

Having seen most, if not all, of her available work, I propose breaking it down into three different modes. As the prolific sort of creative who seems to work nonstop, Rowlson-Hall has demonstrated a wide range. Painting in broad strokes, and always keeping in mind that there is a good amount of overlap between modes, her work can be separated into the following three categories:

The qualities that initially drew me to Rowlson-Hall’s videos was their infectious playfulness. There is a self-conscious childishness woven through her work, but in some of her best pieces this quality is the defining trait.

“The Audition” – Potentially serious subject matter (the dehumanizing treatment of creatives–especially, though not exclusively, women–trying to make a career from their talents) is presented as a single-shot, slapstick obstacle course of increasingly outrageous demands. Disembodied voices blithely instruct an actress (played with total conviction by Rowlson-Hall) auditioning for the undoubtedly lackluster role of “Clipboard Woman” in some undoubtedly lackluster production. In about three-and-a-half minutes we see this desperate and dedicated actress cut off her hair, take off her clothes, masturbate, induce vomiting, and then clean up her own mess–only to be crassly interrupted with a curt “Thank you, Celia. Next!” Perfect.

THE AUDITION from celia rowlson-hall on Vimeo.

“Prom Night” – In another single-shot piece (this time, though it’s an ersatz continuous take with invisible cuts cleverly executed), Rowlson-Hall stages a classic American rite of passage as the ghostly odyssey through varied and conflicting tropes of Western femininity. In a smoky dance hall, empty except for streamers, balloons, and some cheap foil stars, Rowlson-Hall enacts a highly choreographed progression from demure ingenue to seductress, Virgin Mary to bimbo beach blonde, Lolita to the other Madonna (complete with cone bra), and finally to a terrifying, blood-soaked Carrie White. The camera acts as her unseen (though obviously male) suitor. In the end, she is left again to dance alone. Her dance is now childish and free, haunted and absurd.

Though I would never be one to diminish the artistic potential of a good joke or playful dance, there is something to be said for the bravery that it takes to toss one’s hat into the ring of “High Art.” Doing so raises the stakes in a way that only really becomes clear when an artist fails to deliver. Taking your own work seriously should be a prerequisite for creating anything, but demanding that your audience should take it seriously is a whole other monster.

When Rowlson-Hall creates a piece that demands its audience’s full consideration, though, that demand is always richly rewarded. These works are richly layered, bold in their abstractness, and deserving of careful, repeated viewings.

“si nos dejan” – This ten-minute short beautifully and surrealistically, through a series of dialogue-less images, depicts the fear of merging with another person. An old man searches the beach for treasure. A groom carries his bride from the ocean. A stripper feigns suicide by hanging from a pole. A violent shootout is pantomimed in a tacky hotel room. A cop transforms into a Chippendale and sinks into a bubble bath, only to have a woman piss on him and steal his shoes. A boy in white underwear throws a penny. The bride and groom stand next to a pool. They jump in.

“MA” (trailer) – Rowlson-Hall’s first feature deserves a deeper analysis than I have the space or resources (having only seen it once, over a year ago) to give it. It is another dialogue-less, but far from silent, piece that uses image and dance to tell the story of a modern Virgin Mary. What I can say with certainty, though, is that this is a major work and one can only hope that it opens up opportunities for her to create more features in the future.

MA – A Film By Celia Rowlson-Hall • Teaser Trailer from MEMORY on Vimeo.

The third mode of Rowlson-Hall’s varied career, that of the Populist, is where her energies have most recently been focused. In this mode, she sublimates her personal vision for a larger one and utilizes the professional connections she’s built as both choreographer and filmmaker to reach a mass audience.

Girls dance – I’m including this clip primarily to show how Rowlson-Hall is able to transform something as impersonal as an episode of someone else’s television show into a reflection of her own personality. I saw this episode of Girls before I knew who Celia Rowlson-Hall was and it immediately stood out as one of strongest in the series. This dance is the centerpiece of the episode.

“Sensual Pantsuit Anthem (Official Rapped Music Video)” – For some reason, Lena Dunham is a divisive figure. I don’t really understand this, but it’s probably worth noting that I’m a fan of most of her work. However, this collaboration between Dunham (actor/writer) and Rowlson-Hall (director) is probably my least favorite work in the Rowlson-Hall oeuvre. As a piece of political commentary, its shelf-life expired with Trump’s election. However, there is something to be said for two serious artists collaborating on something as utilitarian as a one-off, politically-themed viral video. It has the spirit of two friends saying “fuck it!” and doing whatever they can in the hope that it might help, just a little, to accomplish something bigger than themselves. If this video was a misstep artistically, it was a misstep with the best intentions.

“Pantsuit Power” – This, on the other hand, is Rowlson-Hall in rare form. Co-directed and organized with Mia Lidofsky, it is essentially the same concept as “Sensual Pantsuit Anthem” (a viral video in support of the Hillary Clinton campaign). This one, however, stands out as an artistic triumph. On a Sunday morning in New York City, 200 pantsuit-clad dancers performed in public support of a candidate who would go on to lose the election. But even knowing this outcome, somehow the image of these smiling people in their ridiculous outfits maintains its power. The message was bigger than who you should vote for, it was the message of Rowlson-Hall’s entire career: “I can’t stop the feeling, so just dance, dance, dance.”

Part of what makes Rowlson-Hall such a charming and charismatic figure is the sense of unwavering optimism that comes through in her work. Its effectiveness stems from the feeling that it is neither cynical nor naive. This is optimism as an act of incredible will and that type of unflinching positivity is a powerful notion. It’s an optimism that is utterly vulnerable in a time honest vulnerability is in short supply. In our current environment of media-savvy content creators, Celia Rowlson-Hall stands out as an exception to the prevailing notion of common sense.

Her work is more necessary now than ever before.