Mermaids and keytars; filmmaker Agnieska Smoczyńska’s The Lure doesn’t mess around when it offers up a musical experience born of the ’80s New Wave, punk and cabaret, by way of fantastical, and sometimes depraved, Poland. The film is whimsical and grimey, romantic and horrific; it’s a truly unique tale, to say the very least.

To give the shortest of synopses, as to not ruin any (or many) surprises, The Lure shows us what life might be like for two young mermaids, Silver (Marta Mazurek) and Golden (Michalina Olszanska), who come ashore in Poland, only to become the hottest musical act at a local nightclub. No one seems to find it remotely strange that they’re mermaids (and it’s no secret; a splash of water reveals their tails), they’re physically lusted after as surely as their singing is adored. 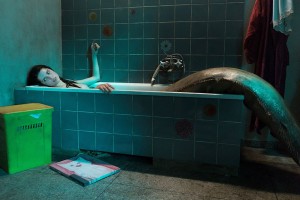 Now, this isn’t The Little Mermaid. Not only do our mermaids have a history of consuming human hearts and flesh, the film also doesn’t shy away from nudity (no strategically placed sea shells in this one), even showcasing our eel-like mermaids very explicit vaginas for a shot or three (no need to make a crude “smells like fish” joke, the film mentions the scent often enough). There’s sex, violence, gore, and, oh yeah, lots of singing.

Because remember, this is a musical; a sometimes overwhelmingly odd one. I mentioned the keytar, so expect some ’80s pop goodness, but the film doesn’t mind moving around different genres. And the music is very, very good. I don’t speak or understand Polish, but that doesn’t mean I didn’t have snippets of songs stuck in my head well after the fact.

Ultimately, if you read “a musical about two mermaids in Poland” and aren’t enticed with the idea, I don’t know how I’d convince you to check it out other than to appeal to your sense of cinematic adventure. But if you’re into what this film is selling based on the above, you’re in for an eclectic, eccentric treat. It’s probably everything you’re expecting, while also delivering the entirely unexpected. Make sense? Doesn’t need to; it has mermaids and keytars.