Who is Grover Norquist, and why does he have such a tight grip on the Republican Party’s fiscal policy? Steve Mims (Arlo and Julie), in his new documentary, Starving the Beast, answers this question and more in a riveting look at the state of higher education – at least, of the public variety – after the past decade of misguided so-called reforms. At every turn polemical, this is call-to-action filmmaking at its very best, exposing the bad-faith policies that have pushed once-great institutions to the brink of collapse. And it all comes down to the kinds of ideas championed by the likes of Norquist, founder of Americans for Tax Reform, an organization which pushes smaller government and resists the kinds of public initiatives that are the bedrock of an equal and fair society.

We begin in Louisiana, where Democratic activist James Carville is addressing an audience at Louisiana State University. He’s angry, and thinks that you should be angry, too. For over 100 years, great public universities like the one in his home state, or the University of Virginia, or the University of Wisconsin, or the University of Texas and Texas A&M, among others, have offered world-class educations to their local – and beyond –­ citizens for very little tuition, making the United States a mecca for the best and brightest in the world (which serves all of our interests, as Carville and his fellow interviewees make clear). Now, however, these achievements are under assault from right-wing zealots who insist on viewing education through the narrow prism of a 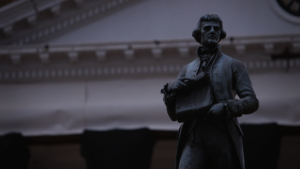 measurable (and very short-term) return-on-investment model. Politicians like Louisiana’s Bobby Jindal, Wisconsin’s Scott Walker and Texas’ Rick Perry have pursued vigorous action to “starve the beast” – that is, deny funding to what they see as monstrous entities that eat up taxpayer dollars for no good reason – and the results have been disastrous both for those institutions and for average citizens’ whose student-debt load has increased accordingly, since the universities make up for a lack of funds by raising tuition. It’s a lose-lose for all.

To be honest, it’s unlikely that this documentary will convince partisans on the right that they need to change their ways, since the bias of the filmmaker is clear. Still, he does what a good journalist ought to do, which is to include points of view from all sides, allowing those he disagrees with to have their say. Beautifully photographed and edited, and with smart people explaining the historical context of the story, Starving the Beast is a vital film for our time.