The 48th annual edition of New Directors/New Films, jointly presented by the Museum of Modern Art and the Film Society of Lincoln Center, came to a close on April 7. Showcasing the work of first- and second-time directors from around the world, ND/NF has built up an extraordinary track record over the years: a short list of its notable alumni includes Chantal Akerman, Pedro Almodóvar, Guillermo del Toro, Hou Hsiao-hsien, Lee Chang-dong, Spike Lee, Christopher Nolan, Laura Poitras, and Lynne Ramsay. The fest’s selections sit firmly in the art-house middle ground between mainstream entertainment and rarified experimental cinema: no straight-up genre movies or pop spectacles, nothing too slick or sexy, but also nothing too austere or forbidding. The four fictional narratives I’ve highlighted below represent the fest at its strongest, combining fresh subject matter with bold approaches to the medium. These are new directors whose next films I’m already excited to see.

Mark Jenkin’s debut feature Bait centers on a Cornish fishing village in South West England. The main character, Martin, is a gruff, stubborn fisherman who rails against the decline of his ancestral way of life. He can’t afford to maintain a boat and is barely scraping by selling the fish he catches on the shore, while his village has become a popular coastal resort for urbanites. The specific targets of Martin’s anger couldn’t be closer to home — his brother Steven, who runs sightseeing cruises for tourists; the yuppie couple who have bought the cottage Martin and Steven grew up in; the Airbnb-renting weekenders who crowd the narrow streets. 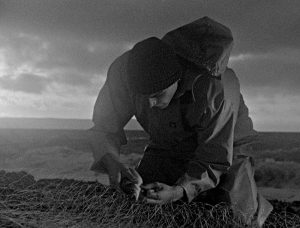 A still from BAIT

Story-wise, Bait is a well-crafted humanist drama, with sharply drawn characters and a smoothly oiled plot. But its most distinctive feature by far is Jenkin’s stylistic approach: he shoots silent black-and-white footage on a 16mm Bolex camera, and hand-processes the film himself. The images are layered with scratches and imperfections, but glow and crackle with a grainy, rough-hewn loveliness. The dusty black-and-white; the profusion of looming, monumental close-ups; the slightly disembodied quality of the post-dubbed soundtrack; and the jagged, fragmented editing fuse into an alluring patchwork of old-movie styles that recalls everything from silent films to Direct Cinema to the French New Wave. This very contemporary tale is rendered in a deliberately anachronistic manner, like a Twitter thread written with a quill pen. Style becomes inseparable from content: the parallel between Martin’s commitment to tradition and Jenkin’s adoption of “obsolete” cinematic forms is impossible to miss. Bait is far from didactic or one-sided in its presentation of opposing viewpoints — the gentrifiers get to have their say, and Martin often comes across as a temperamental, self-righteous jerk. But the film’s sensuous, shimmering beauty can’t help but tip the scales in favor of Martin’s side of the argument: sometimes the old ways really are the best ways.

Bait is firmly rooted in the old ways, however diminished and dwindling they may be. By contrast, the Singaporean filmmaker Yeo Siew Hua’s A Land Imagined depicts a world where all traces of the past have been swept away in the pursuit of growth and profit. If Jenkin lovingly documents calloused hands pulling in fishnets and paint peeling off weather-beaten wood, Yeo returns again and again to images of massive earth-moving equipment and construction cranes at a “land reclamation site” — an enormous building project that imports sand from other Southeast Asian countries in order to expand Singapore’s geographical boundaries. Seen in distant wide shots, the rows of cranes erecting gleaming skyscrapers on the newly created land have a kind of majestic grandeur, but Yeo’s film has more on its mind than mere snapshots of surfaces. 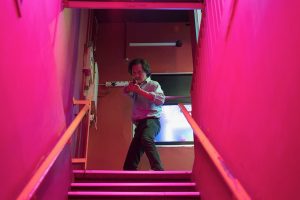 A still from A LAND IMAGINED

A Chinese migrant worker named Wang Bicheng disappears from one such construction site, and a detective named Lok is assigned to the investigation. Lok’s quest for Wang leads him into a hellish underworld of laborers trapped in something close to indentured servitude. He begins to reconstruct Wang’s daily routines, to imagine his way into the missing man’s life. Then, in a surprising shift, Wang takes over as the main character. We follow him in the weeks leading up to his disappearance, as he suffers an on-the-job injury, befriends another migrant worker from Bangladesh, and starts to dig into his employer’s misdeeds. So far, so straightforward. But Wang, we learn, has struggled with insomnia since his accident — and Lok suffers from it too. As exhaustion causes them both to lose touch with reality, the film itself begins to slip the bonds of conventional storytelling. Yeo first teases us with the idea that Lok might be dreaming up his version of what happened to Wang — and then suggests that Wang might be dreaming up the detective who will be sent to find out what will happen to him. (That’s only a mild spoiler; there are many more brain-melting twists in store here.) Yeo has cooked up a rich and heady brew: what begins as a neo-noir thriller with an element of social-message docudrama morphs into a poetic reverie on 21st-century alienation and a metaphysical mindfuck that recalls Borges or Cortázar.

Reality-shifts and mid-film reboots also feature prominently in two other ND/NF standouts, Lucio Castro’s End of the Century and Burak Cevik’s Belonging. In End of the Century, Ocho, a fortyish writer from Argentina based in New York, visits Barcelona, where he hooks up with Javi, a television director who has temporarily returned to his hometown from Berlin. The sexual connection leads to intimations of a deeper relationship that might potentially form between the two. But then we’re whisked into an extended flashback sequence taking place in 1999, when Ocho and Javi, now twenty years younger, meet under different circumstances — both are dating women, for starters — that lead to a similar result: mutual attraction, then sex, then an uncertain future. The flashback sequence soon gives way to yet another variant of the story, in which Ocho and Javi are long-term domestic partners raising a daughter together. 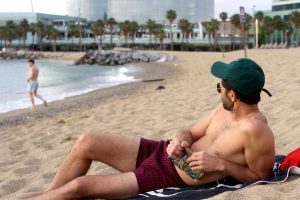 A still from END OF THE CENTURY

Which is the “real” story? Did the flashback actually happen? Is the concluding sequence the solution to the puzzle, or another layer of fantasy? Castro doesn’t provide a literal explanation, and the movie doesn’t need one. End of the Century unfolds with a gentle, easygoing rhythm, but it grapples with profound questions about the way our desires change over time, the shifting nature of love and attachment, and the very serious game we all play of imagining alternate versions of our lives.

End of the Century concludes with what I take to be an homage to Antonioni’s L’Eclisse (or perhaps Linklater’s Before Sunrise, which shares some themes with Castro’s film): a montage of locations we’ve seen throughout the movie, but now depopulated of our main characters. The places remain charged with memory and meaning; the people who lived those memories and created those meanings are absent. The Turkish director Burak Cevik employs a similar device in his film Belonging, but in reverse — first showing us shots of empty locations, then filling them with scenes of the messy human drama that happened there.

Belonging begins with a brief, cryptic introduction spoken by Cevik over a black screen: he addresses his “Dear Auntie” and asks her permission to tell her story, but then declares “it’s our story” and he has the right to tell it any way he wants. This is followed by an extended sequence lasting nearly half the movie’s running time. A new narrator, a young man, relates a harrowing first-person tale in an oddly detached, dispassionate voiceover: on leave from the army, he meets a young woman in a cafe. They go home together and have sex. He departs to complete his military service, but they stay in touch. She confides to him how deeply unhappy she is. They formulate a plan to murder her parents. As the narrator speaks, we see images of the places in which his story is set — the cafe, the woman’s apartment, the scene of the fateful crime. And somewhere along the line, the audience puts together the clues the filmmaker has been scattering throughout: Cevik is reconstructing the true story of how his aunt and her lover killed her mother, Cevik’s grandmother, in 2003 — and the narration we’ve been hearing comes from the lover’s police confession.

A still from BELONGING

Then comes a final turn that, for this viewer, lifted Belonging into the stratosphere. The film switches to an entirely new mode of address in its second half — a heavily fictionalized reimagining of the events of its first, but with crucial differences. Actors now play the roles of young aunt and lover, speaking dialogue that one assumes is largely of Cevik’s invention. Their scenes together breathe life and lyricism into the dry, just-the-facts recitation of the earlier voiceover, showing us the young couple in all their awkwardness, tenderness, ardor, and aspiration. It’s a breathtaking act of empathy, and a risky one, too: in this section of the film Cevik depicts only the night of the couple’s first encounter and part of the following day, and leaves out any mention of the later killing. So we get the chance meeting of two sensitive souls at the hopeful beginning of a new love affair, with no hint of the brutality, the vengefulness, and the moral vacuity of their crimes-to-come. Yet the horror of their real-life actions hangs over every moment of this fanciful fictionalization. Belonging confronts us with the yawning gulf between the angels we imagine ourselves to be, and the monsters we can so easily become.