(Frank Mosley is no stranger to independent film or the film festival circuit. With 62 acting credits, 28 Producing credits and countless other roles in bunches of film, Mosley is one busy and talented guy. Her Wilderness, Mosley’s sophomore effort as a feature director, is currently playing several film festivals as well as special screenings around the country so keep an eye out.)

The experimental narrative is a current of American independent film that remains marginal in an already marginalized artform. Filmmakers such as Mark Rappaport (The Scenic Route) and Jon Jost (Last Chants for a Slow Dance) have sought to push the expressive limits of the medium without surrendering to total abstraction. These films still contain characters and events, but abandon anything resembling conventional plot in order to get at something not expressible conventionally (at least, in theory).

Frank Mosley’s Her Wilderness sits among such films, with a deceptively simple narrative that takes conventional characters, ideas, and themes (memory, desire, the loss of innocence) and fragments them in order that we might experience them anew. The film’s patient, gliding camera makes nature itself a character in the film, as nature often is in films these days, but here nature is also conflated with the character’s inner life, evident not only in the film’s title, but also in the opening shot, where the sound of the waves upon a shore dissolve into the sound of a bath being drawn. This subtle moment is indicative of how the film works as a whole: everything important is only hinted at. 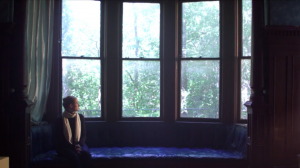 The characters themselves never say anything important; only subtext matters. Nicholas (Jack Elliot) and Paula (Crystal Pate) are a couple whose relationship is slowly disintegrating. During breakfast together, their conversation reveals how enclosed they are within themselves. Their conversation consists of them speaking to each other, but never connecting. Neither seems to really be listening to the other. That Nicholas may have had an affair with another woman (Lauren McCune) could be the cause of their disconnection, but whether the affair happened or not is never revealed. Intercut throughout the film is the wandering of a young girl (Riley Templeton) through the woods, whose journey provides the film with its emotional undercurrent. Does she represent Nicholas and Paula’s unborn child? Or perhaps the inner life of the unnamed woman character, Nicholas’s apparent mistress?

Her Wilderness is a film whose meanings are revealed slowly, its connections and motifs only becoming apparent on subsequent viewings. But the film possesses an emotional richness that is felt from the start, and as the girl’s journey through the woods comes to an end and concludes in the film’s final shot, it provides the sort of fulfillment of good poetry.