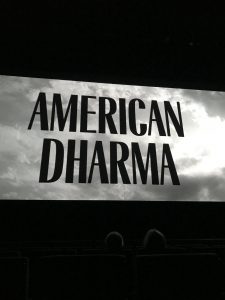 “Should evil be allowed to talk?” is what the conversation around Errol Morris’s latest documentary American Dharma has devolved into – at least according to the filmmaker. For the record, Morris believes the point is moot. “They are gonna talk no matter what,” the documentarian continued in the pre-screening intro to his portrait of Steve Bannon during this year’s IDFA, which is where I caught the controversial flick. (And got the added bonus of being able to watch Morris watching his film, as I somehow ended up grabbing a seat a few feet away from the director, rushing in to the Royal Theatre Carré at the last minute. Sometimes it pays to run late.)

But is this defense as disingenuous as Bannon’s own denial about the emptiness of his cause? Morris created much-lauded docs about McNamara and Rumsfeld long after they’d exited the daily news cycle. Which caused me to wonder, Couldn’t he have waited at least a few years, allowing us (and perhaps even Bannon) a bit of reflective distance before giving the blowhard showboat yet another platform?

For Morris, just by casting Bannon as his main (and only) character has also unwittingly cast himself in the ongoing alt-right reality show, serving in similar fashion as the NY Times does for Trump. Whether he likes it or not, the filmmaker is part of the liberal elite that these purveyors of white male victimhood, as much as they rail against it, are obsessed with being embraced by. (Bannon even admits in American Dharma to being inspired to direct his own films after seeing The Fog of War at Telluride.) The ceaseless provocateur is both ideologue and opportunist. Thus by the simple act of turning his lens on a man who believes there’s no such thing as bad publicity, Morris, in a sense, got played. (Though for the Times – and all corporate media – getting played also happens to be good for the bottom line.) With respected news outlets covering Trump shenanigans incessantly, and Morris anointing Bannon worthy of his own film, these hollow men are receiving precisely the elite recognition that they crave. Which just adds fuel to their raging fires.

During the post-screening Q&A – after Morris theorized that his film has a Wagnerian quality – he even pointed out that Bannon wants to burn everything. “But then what?” Surprisingly, Morris also admitted that he’s not sure he even believes in interviews, per se. “I’m just looking for a way in.” He was fascinated by Bannon’s own obsession with classic Hollywood movies, and has watched all of Bannon’s docs “with possible neurological damage.”

For his part, the moderator was keen to know why Morris hadn’t used the Interrotron for American Dharma. “No reason in particular,” Morris nonchalantly replied, noting that he didn’t use it with Wormwood either. The filmmaker then pondered if the interpretation of movies is “up for grabs.” He’d wholeheartedly disagreed with Bannon’s onscreen assessment of the Falstaff character memorably played by Orson Welles – calling it a self-serving interpretation (as is Bannon’s entire worldview).

More troublingly, though, Morris was then quick to dismiss critics of American Dharma as folks frustrated that he didn’t “throw a brick” at his main character rather than merely challenge him (and let him speak at length, often hanging himself with his own words). The irony, of course, is that Morris’s disdain is similarly self-serving. Deciding to create a portrait of a racist xenophobe who’s also your fan-boy (whether you were initially aware of that fact or not) is a calculated decision. Following one’s curiosity, as Morris claims as his working method, has consequences. Letting evil speak because it will is one thing. Handing it a bullhorn is another. (Even if you’re screaming back at it at the top of your lungs.)

The most telling scene in American Dharma occurs when Morris reveals to the former White House Chief Strategist that he’d voted for Clinton out of fear – of Trump but also of Bannon himself. For the first time, the shrewd operative seems genuinely taken aback. He’s truly unable to see how his persona plays to the general (non base) public. Not unlike how Morris has his own peculiar blind spot when it comes to his film’s reception.