(BamcinemaFest has quietly become one of the most prestigious film festivals in the world. It runs June 15-26 and is chock full of awesome film selections.)

I’ve entertained the idea of producing a 5-part collection of short films with a different filmmaker telling a story set in each borough of New York City, so I was psyched when I saw collective:unconscious launch on Kickstarter. Producer Dan Schoenbrun chose five NYC filmmakers – Josephine Decker, Lauren Wolkstein, Frances Bodomo, Daniel Patrick Carbone, and Lily Baldwin – and had each of them write down one of their dreams, then he gave each filmmaker someone else’s dream to adapt as a short film.

The term “collective unconscious” comes from Carl Jung, who distinguished between the “personal” and “empirical” psyche specific to each person and drawn from their life experience, and an “inherited” “universal” psyche of archetypes and mythology that we all share. Having the filmmakers direct someone else’s dream rather than their own allowed them to connect with the broader themes the dream-stories explore. But collective:unconscious is more than just a clever name for a concept film – sharing the dreams left a palpable imprint on the narrative. Each film is briefly introduced by snippets of filmed sessions between the director and hypnotist Daniel Ryan, but even without that frame the stories flow into each other and are bound by a liminal thread of creativity. collective:unconscious could have come across like a programmed block of separate short films, but it feels like a feature film told in five parts. They all veer experimental because the narratives are shaped so fully by metaphor, but each film is distinct, distinguished by the director’s style and voice.

The first film is Black Soil, Green Grass, Daniel Patrick Carbone’s direction of Lauren Wolkstein’s dream. In what feels like a creepy, dystopian world a jarring voice counting sheep is projected across a country landscape through loudspeakers set on top of towers. A young man (Frank Mosley) takes care of a despondent woman (Sandra Weigl), growing increasingly frustrated with the incessant noise. He records the woman’s haunting rendition of a Romanian gypsy song, then fights the tower guards to replace their propaganda with her song. It’s in black and white, and is the most traditional short film of the group, with a still, classical quality to the narrative and visual compositions. Things get stranger from there.

Josephine Decker’s First Day Out adapts Lily Baldwin’s dream. Voice-over recordings of men describing what it feels like to come home from prison play over bizarre scenes of masquerade and loose choreography. The camera swoops through a kinetic swirl of faces and bodies in motion, in and out of a large house, a docked boat, a park, an urban factory, a swampy lake. It’s disorienting – are we in New York City? The South? Through dance Decker creates an unusual and resonant complement to the men’s powerful voices. That pairing is what makes the film but also sets it on edge.

Beemus, It’ll End in Tears is Lauren Wolkstein’s adaptation of Frances Bodomo’s dream. A beefcake gym teacher (Will Blomker) terrorizes a class of high school students, and one student in particular (Ryan Cassata), barking commands and leading them through strange calisthenics. There’s an aggressive hetero-psychosis to his manner that collapses when a volcanic eruption engulfs the school. Wolkstein’s film is perhaps the most polished and colorful, with actors playing more specific roles. She creates that uncanny dream feeling by beginning close to reality – at first her world is familiar and just a bit off, then off by increasing degrees, until it ends in chaos. 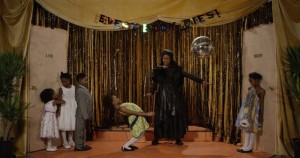 The film that leapt out at me is Frances Bodomo’s Everybody Dies! adapted from Josephine Decker’s dream. Tonya Pinkins plays Ripa the Reaper from “the Department of Black Death.” She is the host of a macabre public access children’s show that “educates” children about death, specifically how Black people die in America. The aesthetic is deliberately cheap and lo-fi, from the set’s mylar curtains to the video texture and washed out color of the image. It’s a disturbing and brilliant nightmare of a film. Pinkins grimaces and keens, growing increasingly angry and distraught by the absurdity of her existence. There’s an astonishing scene where she marches a line of Black children onto the stage, then shuffles them through a door into the grasping hands of death where they disappear into darkness.

The children are dressed in their old-fashioned Sunday best, their sweet, upturned faces like ghosts from the 1960s. Bodomo’s film has a Harmony Korine wildness to it, the style and texture perfectly expressing the rage and horror that flow underneath. It rocketed to the top of my list of best short films of this year.

The collection ends with what was for me the most perplexing film, Lily Baldwin’s Swallowed, from Daniel Patrick Carbone’s dream. A housewife frets over her baby and throws a party, while a sinister force grows inside her, until she goes into a trance-like dance of catharsis. The film is rife with references to the vampiric nature of motherhood and breastfeeding, and Baldwin (literally) milks the visual metaphors a bit past the point of freshness. But as with the other films, she commits fully to a unique expression of her story.

Overall I was super impressed with how successful this collaboration turned out to be, but what most surprised me is how political the films are. These are strange and complicated times, and the films express some of the fears and anxieties of looming social questions: media coverage of quasi-fascist movements, prison reform, transgender rights, Black Lives Matter, paid parental leave…the parameters of this “assignment” seemed to draw out the directors’ creativity in rich and unexpected ways. The filmmakers both embrace and flex against the foreign dreams, ultimately engulfing them and making them their own. I’m curious to see how these themes inform their future films.