Intellectual As Shit: A Talk with Daniels (SWISS ARMY MAN)

(Daniels (that’s the directors’ name…err…names…uhhh) much buzzed about feature Swiss Army Man finally finds its way ashore June 24 in NY and L.A. It opens everywhere July 1 via A24) 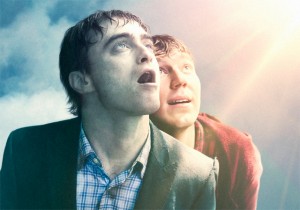 A suicidal man has to convince a dead body that life is worth living. This is the logline that Daniels (the mind meld of Daniel Kwan and Daniel Scheinert), the directing duo behind Swiss Army Man, came up with to pitch potential investors. At a talk they gave this week at the Film Society of Lincoln Center, the Daniels explained how their idea for Swiss Army Man would come up as a joke in meetings — expecting a chuckle and a pass. Their vision came together over the course of a few years and two ‘intellectual-as-shit’ Sundance labs where legends like Quentin Tarantino gave them notes as profound as, “maybe you can sneak in the Gilligan theme song.” The Daniels had to politely turn down that suggestion. Eventually they got a ‘yes’ from actors Paul Dano and later Daniel Radcliffe—whose father loved the script (he reads all of his son’s scripts apparently)—and then from investors whose sense of humor was as weird as theirs. Indeed when pitching or marketing Swiss Army Man, you can’t hide the weird. Instead the innovative distributor A24 has embraced it, and is hoping audiences do the same.

The Daniels first made their mark with music videos and short films that were oft staff-picked on Vimeo, a video-sharing site that has become a training ground for new talent. Watching them it’s easy to see where the style of Swiss Army Man originated. In the extremely popular music video “Turn Down For What” (500M views), Kwan’s junk bounces to the beat of the music. The effect was created with a broomstick through a hole in the back of his sweatpants operated by Scheinert. In Swiss Army Man, Manny’s (Radcliffe) boner becomes a compass that guides them home. For the film, the Daniels upgraded to an animatronic erection to achieve something ‘more expressive.’ 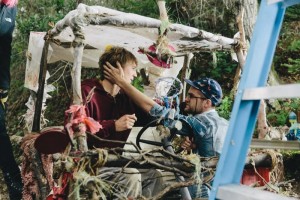 Another musical collaborator, Manchester Orchestra, was instrumental in bringing Daniels vision to the screen. The filmmakers would play their music in pitch meetings to set the tone, as well as to the cast and crew before a shoot. Their “Montage” song graces all of the marketing materials and perfectly epitomizes the film’s goofily poignant style. After showing the music video for Manchester Orchestra’s “Simple Math,” which depicts the events leading up to a car crash through a father-son relationship, Scheinert explained the balancing act between weird and sincere that they strive to achieve in all of their work. Kwan said that with Swiss Army Man, they wanted to make a movie that starts with a fart that makes you laugh and ends with a fart that makes you cry.

Of course the film will turn some people off, as it did with one reporter at Sundance who walked out after 45 minutes and took to Twitter to express his dismay which we covered here on HtN (That writer later tweeted after seeing the trailer that he would give the film another shot). For those more open-minded theatergoers there is a rewarding experience awaiting them. In a summer crowded with comic book adaptations, remakes and formula-fare, Swiss Army Man stands apart. It is a truly unique story from first-time directors, getting a wide release and a worthy marketing push, and its success could change the future landscape of indie film for the better.