TRUST US, THIS IS ALL MADE UP

(Trust Us, This Is All Made Up is available on DVD

, and at iTunes. It world premiered at the 2009 SXSW Film Festival. Visit the film’s official website for more information.)

Trust Us, This Is All Made Up is, at first glance, a concert film, one that focuses on a little-understood art form considered by many laypeople to be the provenance of liberal-arts school freshman and/or failed class clowns. The first straight-up documentary by mockumentarian Alex Karpovsky (Woodpecker, The Hole Story), Trust Us is indeed a cinematic record of an essentially fleeting experience: an improvisational performance by legendary duo David Pasquesi and TJ Jagodowski. TJ & Dave, as they are known to their fans, are Gods of their misunderstood medium, seasoned players who create long form sketches that resemble Pinter plays more closely than they do drama club warm ups. Once a month, the team hits the stage at New York’s Barrow Street Theater to hypnotize audiences with these shockingly cohesive exercises in immediacy. Karpovsky records one such performance from start to finish.

Upon further inspection, Trust Us reveals itself to be something far more ambitious and complex than its concert film label would imply. Maybe it’s a result of Karpovsky’s cunning direction and creative editing, which utilizes a split screen to formally mimic the way that TJ and Dave separate and merge, the unknowable but pre-ordained cellular activity of their partnership. Karpovsky’s energetic work from behind the camera gives aesthetic life and structure to what might otherwise seem like a second-rate way of seeing a first-rate feat of mental agility. 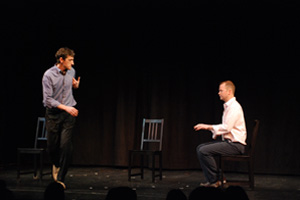 The film starts with a brief history of TJ and Dave, both as individuals and partners. Pasquesi is a notable character actor, particularly memorable for his work as Stew the sleazy meat man on Strangers With Candy. Jagodowski, like his partner, is an established member of Chicago’s Second City improv theater, He was a longtime fan of Pasquesi’s before he got the guts to try and wife the guy. Good thing he did, as their partnership feels Fred-and-Ginger fated. In Malcolm Gladwell’s most recent pop-psychology best-seller, Outliers, the New Yorker writer examines a phenomenon known as the “Ten Thousand Hour Rule,” positing the theory that exceptional artists, musicians and athletes create the work that catapults them to the next level after at least ten thousand hours of practice. I can’t give you an exact figure for TJ and Dave, but they make it clear that they have spent a great deal of time getting comfortable with each other and with their process—and they’ve reached an understanding that allows them to up the ante each night on stage. Skeptical audiences can’t believe the guys aren’t practicing their jokes in front of the mirror, but Jagodowski assures us “this is all made up.”

How they do it, and why they do it, form the central, and unanswerable, questions of the film. There is something decidedly New Agey about the nebulous magic that descends upon TJ and Dave when it’s time to perform. The way they describe their mystical connection to each other, and to a catalogue of invented characters, is more like listening to a guided meditation than hearing an artist bloviating about process. They live at the center of a mandala, finding security and satisfaction in the act of not knowing.

Filmmakers are, as a rule, a neurotic bunch. We’re also constantly at the mercy of earthly powers beyond our control as we attempt to turn an idea into a reality. TJ and Dave’s remarkable give-and-take serves as a healthy reminder of the true immediacy of creativity. So does Karpovsky’s tricky, transcendent little movie.

YOU CAN CHOOSE YOUR FAMILY