WORLD BEFORE HER, THE

(The World Before Her world premieres in the World Documentary Competition at the 2012 Tribeca Film Festival. Go here for TFF details/screening information. Next up after that is Hot Docs. Visit the film’s official website to learn more.)

Ruhi is a young woman from a humble background in Jaipur who makes it to the finals of the Miss India beauty pageant with an enormous determination to win. Prachi is a young drill sergeant at a fundamentalist Hindu camp for girls. Director Nisha Pahuja paints a canny portrait of India today by detailing the dreams and struggles of the two women, who personify the extremes of the culture wars.

For Ruhi and the other contestants, there’s plenty of coaching in the ways of glamour in the days leading up to the Miss India Pageant. “Remember, the look is sexy, it’s not bitchy,” a photographer reminds them. Painful skin-bleaching is part of the regimen. Sabira Merchant, a wonderfully stern, cat-faced diction coach, explains how the competition is a rare opportunity for young women to pull themselves out of poverty. Clearly, the stakes are high.

The pageant is surprisingly controversial, testing the limits of tolerance of India’s large population of increasingly politicized religious fundamentalists. Hard to believe, but in the land of the Kama Sutra, bikinis cause a scandal: the swimsuit competition is held behind closed doors. Rather than summing up the fundamentalists in a third-person plural statistic, Pahuja dives into the heart of the movement—getting access to a Durga Vahini camp, where cameras have never before been allowed—and finds documentary gold in Prachi, a one-woman microcosm of the conflicts and contradictions inherent in being a woman in India today. 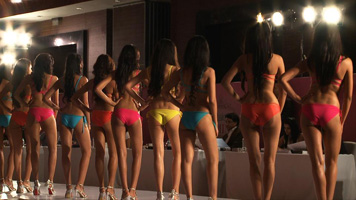 Prachi is a rabid member of an extremist Hindu group with a history of horrific acts of violence. She’s ready to kill anyone who goes against her religion: “That is self defense, what we are doing. I am not a Gandhi supporter. I hate Gandhi.” Pahuja cuts to a speech by the leader of the women’s branch, about taking Indian women backward not 500 years but 5,000 years: “Girls should be married by the age of 18. Because by the time they’re 25 they’ll become so strong-willed you won’t be able to tame them.” The irony is that Prachi—who will send the lesbian-meter off the scale for anyone with a bit of gaydar—has no intention of getting married: paradoxically she wants to stay single to dedicate her life to a movement that would deny her that choice. Prachi confides, “I’m different from girls; I’m different from boys, and I don’t know how to behave… While making me, God was in a different mood, so he combined the two things together.” As scary as her politics are, her guileless charm is irresistible.

Prachi’s father is equally fascinating: always jovial, wearing strings of beads over a furry Buddha belly, he’s utterly confident in his belief system: “I don’t know what she wants or doesn’t want, and it’s not important,” he says of Prachi, sending her to fetch him a cookie. “Marriage is her duty.”

Westernization is widely perceived as a threat to the values and cultural identity of the country, and Pahuja finds in an interview with Ruhi a clear example of the downside of the Western, winning-is-everything attitude. “I don’t care about the experience,” she says. “The other girls are enjoying the cameras and stuff like that. But for me, I’m here only to win, only for the crown.”

Going well beyond Westernization, Pageant Director Marc Robinson subjects the contestants to a grotesque event on a beach in Goa. “I have always had this vision of putting cloaks on women so we can’t see their faces, only their legs,” he says. The “cloaks” are sort of demi-Klansman robes: white sheets with crudely cut out eye-holes. The faceless women are made to parade their legs up and down a makeshift catwalk. “Very nice, stop,” Marc instructs a contestant. “How are you feeling, hot? Good. Your legs are looking beautiful.”

The mother of Pooja Chopra, Miss India 2009, tells an incredible story of having to leave her husband when Pooja was born, to save the baby’s life. A haunting bottom line for Indian women is that it’s common for girls to be killed at birth by parents who want a male child. Prachi sees this as a reason for gratitude to her father. She rationalizes him beating her: “A punch is not a problem, but a hit, a slap is really painful for me… and he has the right. He has given me birth.”

The film climaxes with the announcement of the winner of Miss India, with Ruhi’s parents anxiously watching from home. But the final words are Prachi’s: a strange but lucid explanation of how she understands her identity and accepts her fate.

A Conversation with Andreas Koefoed and Christian Bonke (BALLROOM DANCER)