(Screenwriter/Producer James Solomon makes his directorial debut with The Witness, an impressive journey for the truth about Kitty Genovese. The film is in theaters in New York now and expanding throughout the summer.)

On March 13, 1964, 28-year-old Kitty Genovese was murdered in Kew Gardens, a middle-class neighborhood in Queens, NY, while “thirty-eight witnesses” (a number enshrined in the best-selling nonfiction account of the case, by A.M. Rosenthal of The New York Times) watched from their apartment windows, doing nothing. Or so the story went for 40 years. In 2004, however, another Times reporter, Jim Rasenberger, revisited the case, questioning much of the conventional wisdom and many of the facts. Bill Genovese, Kitty’s youngest brother – and acknowledged favorite of hers – seeing that article, decided to embark on a new investigation of his own, to uncover what, exactly, happened the night that Kitty died. Screenwriter and producer James Solomon had met Mr. Genovese in 1999, when he briefly worked on a scripted film that HBO was then considering about the murder (that film was never made). He offered to document Genovese’s efforts, and the result is this vividly compelling film, completed 11 years later, which marks Solomon’s directorial debut.

Solomon is extremely fortunate in his protagonist. Bill Genovese – a Vietnam vet whose legs were blown off by a landmine in 1967 – combines thoughtfulness with tenacity and a pleasantly disarming demeanor that puts the people with whom he speaks at ease. Perhaps his wheelchair helps, as well, though this man is clearly no victim, but rather a strong-willed survivor who has lived a full life, to which his loving children and wife can attest. Still, he was all of 16 when his beloved older sister was killed, and Kitty’s death marked him in a profound way. Even more, the thought that she died alone, bleeding out while no one helped, has been the motivator for much of his own life’s actions (including his choice to volunteer for service in the Marine Corps). But did she die alone? Were her neighbors really that cowardly? And what does it matter, since she’s still dead, as Bill’s other siblings keep reminding him … 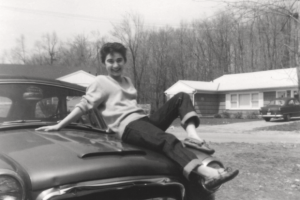 Well, the truth matters, and that is Bill’s ultimate goal: the discovery of the facts. For so long, Kitty’s murder has served as a cautionary tale, illuminating the “bystander effect” and (hopefully) leading future generations to intervene, even with a simple call to the police. Even if the facts of the case are wrong – or, at the very least, exaggerated – and people did act, or did call the police, experts in The Witness make the claim that the outrage over perceived bystander indifference helped lead to the implementation of the 9-1-1 call system. Which is good, we can all agree. Still, facts matter.

Speaking of facts, along the way, Bill pauses to focus on the living Kitty, remembering what made her special to him and to those she loved. Though she had briefly been married to a man, she was living with a lesbian lover – her “roommate” – at the time of her death, and Bill tracks down that lover, Mary Ann Zielonko, as part of his process. Like much in the film, it’s a very moving encounter. What is less satisfying, however, is when Bill pivots from his examination of the surviving witnesses and attempts to contact Kitty’s killer, Winston Moseley (who died after the film was completed). It’s understandable why Bill wants to talk to the man, but those efforts take us away from the more compelling search for why the story of the “thirty-eight witnesses” was never challenged at the time.

Still, in spite of this weaker third act, the film remains a powerful testament to memory and loss, how the passage of time affects both, and why we seek to frame stories through structured narratives, even if the facts don’t support them. Solomon and Genovese deserve enormous credit for their painstaking efforts over the course of the long production period. They leave us with many questions still unanswered, but with a sense of profound satisfaction that the questions were, finally, asked.