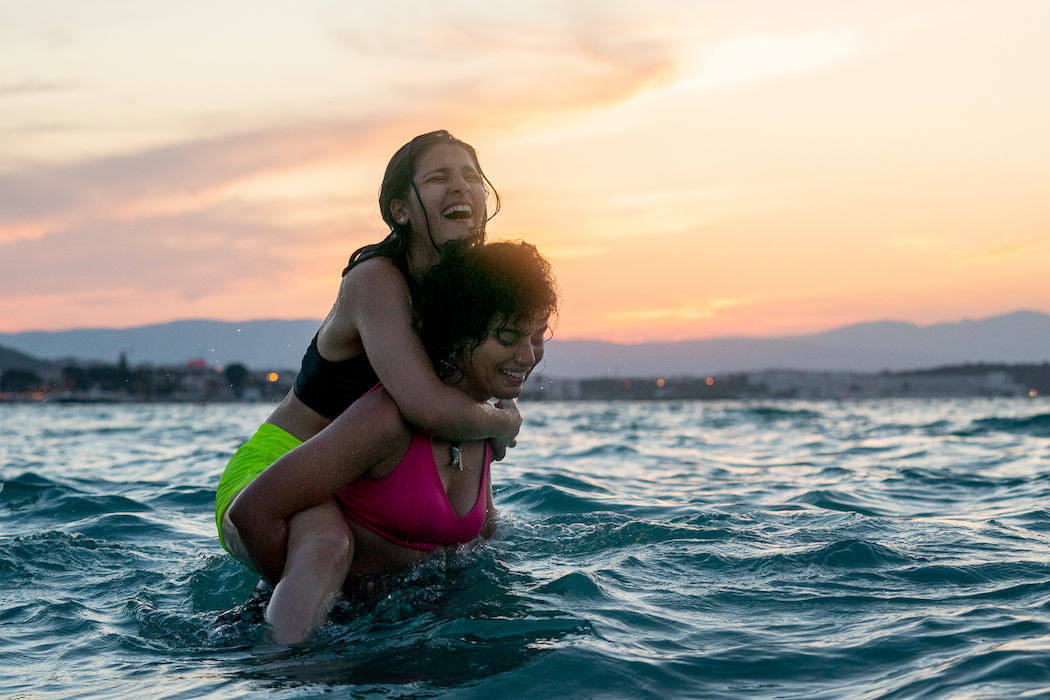 (Check out Chris Reed’s movie review of The Swimmers, the latest film from Sally El Hosaini. It’s streaming now on Netflix. Seen it? Join the conversation with HtN on our Letterboxd Page.)

In 2015, Yusra Mardini, then 17, and her older sister, Sarah, fled the civil war in Syria for a new life in Germany. Both competitive swimmers, they jumped into the Aegean Sea and spent hours in frigid water pulling their overloaded, waterlogged boat to shore when the engine stopped. Given the untold number of drowning deaths since the Syrian crisis began, it is safe to say that the Mardini sisters helped save everyone aboard that craft. In her new film, The Swimmers, director Sally El Hosaini (My Brother the Devil) follows the two women as they struggle to find themselves in a world that treats refugees as an annoyance, at best, and at worst ripe targets for exploitation and abuse. It’s an engaging drama filled with as much joy as heartbreak and pain.

We begin in 2011 in a suburb of Damascus, Syria, with the Mardini family relaxing by a pool with friends. Father Ezzat (Ali Suliman, Huda’s Salon) is a proud swimming coach to his two oldest daughters, both of whom show promise, though it’s the younger of the two, Yusra, in whom he puts the best hopes. There are hints of revolutionary trouble in the background, but the 2016 Rio Olympics are foremost on Ezzat’s mind.

Cut to 2015, and things have changed. Now of partying age, Yusra (Nathalie Issa, My Favorite Fabric) and Sarah (Manal Issa, Memory Box, and Nathalie’s real-life sister) enjoy dancing on a rooftop overlooking Damascus as the bombs fall, though soon the destruction hits a little too close to home, prompting them to want to flee. Ezzat is not so sure the route to Europe is safe, but by dragging their DJ cousin Nizar (Ahmed Malek, The Furnace) into it as male chaperone, the sisters convince their dad to let them go. Part of their strategy is to get to Germany (where they have a friend) while Yusra is still 17 so she can apply for a “family reunion” waiver to allow her parents and youngest sister to join them. The clock is ticking.

What then ensues is harrowing, a detailed examination of the plight of refugees around the globe. Mistreated and taken for granted as sources of easy cash, desperate migrants will do anything for a better life, and so fall prey to the worst kinds of predators. Time and again, Yusra, Sarah, Nizar, and the friends they make along the way all find themselves in peril, whether it be at sea or on land. The fact that they make it to their destination alive (as many have not) is nothing short of miraculous.

Central to the narrative is the recreation of the real-world crossing between Turkey and the Greek island of Lesbos. When their boat’s engine stops and the vessel starts to flood, it’s Sarah, the more rebellious of the sisters, who first jumps in the water to start pulling the boat to shore, with Yusra following. Hearing their father’s voice as coach in their heads, they brave the cold waves to keep swimming, finally making it to land, but barely. And then, once there, they are greeted with anything but warmth from the residents, who by now have seen an untold numbers of people just like them arrive in search of a better life, as evidenced by the huge pile of discarded lifejackets that we see lining the beach.

The film doesn’t stop there, for we follow Yusra and Sarah through many more obstacles until their arrival in Berlin, where Yusra manages to convince a swim coach, Sven (Matthias Schweighöfer, Army of the Dead), to pick up her training. There’s no chance she can compete in Rio for Syria, given that the state there has ceased to function, but when they find out that the Olympic Committee has created a “Refugee Olympic Team” for the first time, she sets her sites on qualifying for that. Which she does. And though she does not medal (the film only shows her winning her first heat, which is factual), she does inspire, and now we have The Swimmers to make sure we know her and Sarah’s tale.

The movie has many fine qualities, including the excellent editing and, especially, scene transitions. Unfortunately, there are also far too many music cues, with a different pop song blasting around every corner. And then there is the strange matter of language: though Yusra and Sarah speak Arabic to their cousin and parents, they almost always speak English to each other. It makes sense that English would be a common tongue between the sisters and their fellow refugees (who come from Afghanistan, Eritrea, and elsewhere), but every time they use it when it’s just the two of them it feels like an anglophone-friendly gimmick. Nevertheless, the rest, despite the considerable length (135 minutes), works. It’s an important story, given all the cinematic attention it merits.