(Kyle Patrick Alvarez continues to excel and evolve as a filmmaker. His third feature, The Stanford Prison Experiment is a taut look at one of the most infamous and controversial psychology experiments ever attempted. The film premiered at the 2015 Sundance Film Festival and was picked up for distribution by IFC Films who will be releasing the film in July.)

To say that Philip Zimbardo’s infamous 1971 psychological experiment eponymously captured in Kyle Patrick Alvarez’ grueling third feature is an excruciating experience, is not to discount the sheer volume of pleasurable moments to be found within. It would be negligent to suggest that the film, winner of both the Alfred P. Sloan prize and the Waldo Salt Screenwriting Award at this year’s Sundance Film Festival (second and only film since Sleep Dealer in 2008 to pull this off), does not acknowledge this experience, this excruciation, as its primary objective. The result of years of Hollywood development hell (the screenplay, credited to Tim Talbott, was first penned in collaboration with Christopher McQuarrie, of The Usual Suspects fame and currently making a seemingly endless series of movies with Tom Cruise, who stayed on as producer though originally slated to direct), and at least one lawsuit and competing project (2010’s pretty abysmal The Experiment, starring Forest Whitaker and Adrien Brody), Alvarez’ picture is taut, composed, and authentic in its intentions. Nowhere in the mess of human psyches splayed open onscreen is there the familiar stench of ulterior motives as is so commonly found surrounding projects of similar ilk. Instead, Alvarez manages to dissect the findings of Zimbardo’s study and Talbott’s script, to display human nature at its worst, without passing judgment, and without falling prey to the caricatures we find suspense narratives riddled through with, more oft than not.

In the wake of one of the most daring and brazen prison escapes in New York State history, The Stanford Prison Experiment (which premiered Monday at Brooklyn’s Northside Film Festival, and opens through IFC in July) is all the more reason to revisit material that while at this point historical, still appears relevant in examining the dichotomy of punishment/rehabilitation, and the dynamic of the jailer-jailed axis, one complicitly co-dependent and endemically corrupt. Upstate about 5 hours north of Kings county, the town of Dannemora proudly states that their beloved Clinton Correctional Facility “serves not only as a place of employment, but as part of a longtime family livelihood tradition.” This is the same place that Andrew Cuomo visited the day after two convicts re-staged Escape from Alcatraz , to examine the steel pipes cut through with mysteriously obtained power tools and ask a fellow inmate, “Are you some kind of heavy sleeper or what?” Keep in mind one of the escapees was serving time for shooting a State Trooper 22 times and then stealing his Patrol Car, and the other was in for kidnapping, beating to death, and dismembering a man in the 90s, after which he fled to Mexico, murdered another American outside a bar while attempting to rob him, and only after being sentenced to 20 more years in a foreign prison was extradited back to New York. Not exactly angels in pinstripes, and far from the folk hero Bucky Phillips represented in his fugitive journey across Niagara county a decade earlier, these men, whose pictures lay plastered all over the front page in Western New York today, and most likely well on their way into Canada as we speak, are as much products of the Prison system itself as they are the types of minds we seek safety from, through incarceration. It is, instead of simple entertainment, through this prism of understanding the results of a method of discipline, that you should view Alvarez’ film. Like Charles Manson said so famously, “Once you’re inside, it’s all you know.”

To understand The Stanford Prison Experiment, it might help to know a little background on the subject matter. Zimbardo, whose work on human behavior in systems of duress is still utilized in psychology departments across the globe, had simple intentions in his original study, which took place across 6 days in August of 1971, and was made possible by funding provided by the U.S. Office of Naval Research — to see first hand the psychologies of both roles in an environment of incarceration — that of Prisoner and Guard — and how they took shape simply as a matter of identity and suggested identity. None of the students selected to take part in either faction were anything in the experiment if not for Zimbardo’s random designations, and subsequently therefore, could have gone either way. It was with the mere toss of a coin that their fates in the experiment, and their respective places in the course of this little sliver of history were selected. It just goes to show — the difference between Jailer and Jailed can be negligible. It is this thesis, one of control and the science of suggestion, which would guide the results of the experiment. 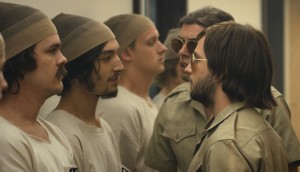 Zimbardo’s later book The Lucifer Effect, written in response to his (apparently disregarded) testimony at the trial of one of the Abu Ghraib prison guards, subtitled How Good People Turn Evil, states plainly that the prison environment is too closed off for any result other than the deindividuation, group polarization, and diffusion of responsibility witnessed in the Stanford study to take place. It is simply what happens when you lock the doors and throw away the keys. In the case of the Stanford study, these results became so self-evident within the initial 6 days of the experiment that the proceedings were brought to a screeching halt, well shy of the initially stated 14 that was planned. It is telling however, that in light of the experiment’s outcome, the Navy and Marine Corps, both the major benefactors and those who stood to benefit the most from the study’s findings, didn’t seem to share those findings with either the Armyor Central Intelligence. Either way, the footage of the original study is online and remains shocking, even today. See for yourself if you like.

Alvarez’ film sets out to display the events of the original experiment through a daily framework, one free of any form of judgment cast upon the various onlookers and those involved, and one that questions many of the initial precepts of the experiment and residents of the “prison” — really just a cordoned off hallway of classrooms and offices in the basement of Jordan Hall, Stanford University’s Psychology building. Was it the social exchange theory of altruistic pursuits (a theory that purports social benefit and gain to be considered more instinctively than any form of empathy) that prevented the few conscientious guards from speaking out against their more sadistic compatriots, those who seemingly relished in ganging up on the prisoners, and in turn made it impossible for the respective Prisoners to remain unified and stand by each other?

The first signs of distress began in only the 2nd day, with one of the Prisoners (“8612”, played in the film by an excellent Ezra Miller) cracking up almost instantaneously. And the other Prisoners, while in the film portrayed to be more divided than in actuality, seemingly abandoned their initial stance of US vs. THEM and appeared to accept their diminutive status once hope of rebellion seemed squashed by the Guards. It is important to note that Zimbardo, played in the film to the conflicted hilt by Billy Crudup (whose personalization of a man with good intentions, stuck in a series of events of his own making, is as good as anything he’s done), cut short the proceedings at the behest of his colleague and then fiancé, fellow psychologist Christina Zimbardo (nee Maslach), played in the film by a thankless Olivia Thirlby, in the undesirable position of being not only the sole woman involved in the experiment, but also the only objective eye undaunted by her loyalty to Zimbardo, as his other colleagues appear at times. 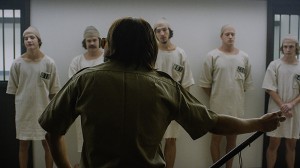 The characterizations and cinematography in the film are what sets it apart from other similar portraits of life on the Inside that we’ve seen before. Gone are the glossed-over, Hollywoodish brutalities ofDarabont, or the shock value of Oz. Instead, what Alvarezhas made is more akin to another terrific (and overlooked) depiction of the Incarcerated, Robert Young’s 1977 Short Eyes, adapted from the playwright Miguel Pinero’s Tony nominated and NYCC award winning work from three years prior. Pineroknew a thing or two about the Inside, and it would appear that each of the actors involved in Alvarez’ picture, as well as the director himself, managed to learn something about it as well. The cast, a virtual coterie of today’s most promising talent, includes touching moments from the likes of Ty Sheridan, who continues to impress, broodingly and ruminative, and Jack Kilmer, who with little dialogue manages to convey the sense of someone so satisfied at not being caught in the crosshairs of the authorities, and rather determined to remain in their favor, that he does not speak up on Visitor’s Day to his parents, who seem dismayed at his complacency and contentment behind bars.

Likewise in the mix of toxic personas is James Frecheville, bringing a sense of conflict to the role of one of the Guards, and a dangerously enthusiastic Nicholas Braun, whose sadism becomes more and more apparent at each potential insurrection. Michael Angarano struts his stuff, imitating Strother Martin’s legacy-forming rhetoric from Cool Hand Luke, jokingly referred to by the Prisoners as “John Wayne,” mouthing off in a twang-affectation, “What we’ve got here is failure to communicate. Some men you just can’t reach. So you get what we had here last week. Which is the way he wants it. Well, he gets it. And I don’t like it any more than you men.” And while Angarano seems almost miscast (he’s a sight shorter and stockier than any Napoleonic corrections officer should be), his appearance in the chaos is actually well-placed and proves a perfect point — that even those seemingly predestined to become Prisoner or Guard, one or the other, even if by their own genetic makeup, can effortlessly adapt to the precepts of their chosen role, no matter how brutal, no matter how inverse to their own instincts, no matter how against their nature and inhuman it may seem.

Prisoner, or Guard? Which would you be? In conclusion, from checking and rechecking the findings of Zimbardo’s original experiment, and those of Alvarez’pitch-perfect realization, it is sadly a difficult question to answer. The only way out of the whole mess is to stay out of it in the first place. As the computer tells Matthew Broderick’s David Lightman at the conclusion of John Badham’s WarGames: “A Strange Game. The only winning move is not to play.” I’d put money on Philip Zimbardo’s concurrence. 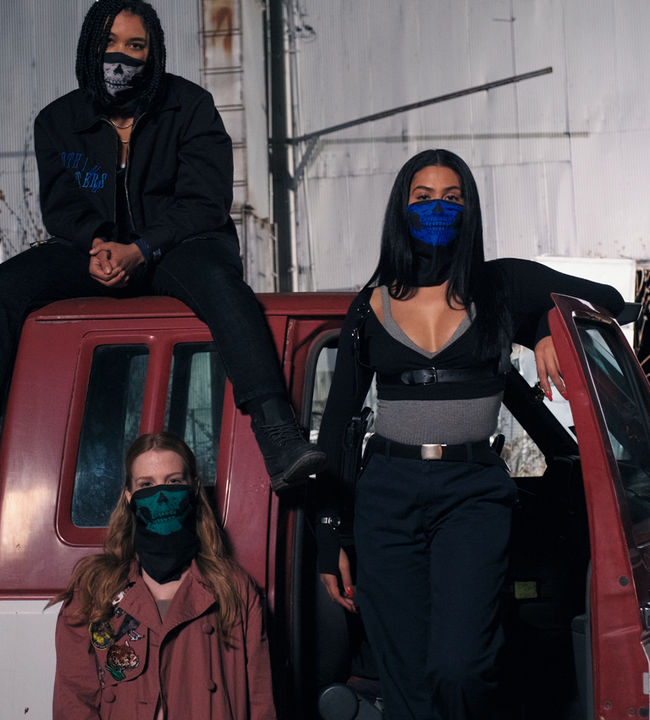 A Conversation with Robert Greene (BISBEE ’17)