Most people join law enforcement because they want to help victims of crime, but not as many are equally as passionate about helping the people who committed crimes. To Seattle P.D. Officer Kim Bogucki the inmates of the Washington Corrections Center for Women in Gig Harbor, WA are more than just numbers. They are human beings who have made horrible mistakes. If they share what they’ve learned with young girls and women in the outside world, perhaps they can prevent someone else from meeting the same fate. Kathlyn Horan’s documentary, The IF Project, profiles Bogucki and the program she started as well as four of the inmates whose lives were changed as a result.

The first writing assignment Bogucki gave inmates was to write a letter to their younger selves telling them something that might have changed the course of their life. That first day, her query was met with silence. But the question stuck with one inmate, a woman named Renata Abramson, and she began to not only discover the answer for herself, but also to pose it to her fellow inmates. Months later, Renata presented Bogucki with a stack of letters and the IF Project was born.

During writing sessions, the moderator poses a question that will help the women come to understand not only where they went wrong, but also that it’s not too late to make things right. Their answers are, unsurprisingly, heartbreaking. One woman says that she would have told her younger self, “You’re not gonna see your kids for 10 years”. 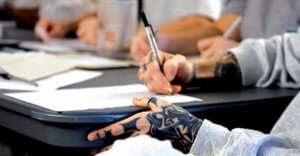 The women spend some time with their thoughts and then volunteers share what they’ve written with the room. Often there are tears – and not just from the person reading. This display of emotion is rare in a prison setting. Sometimes the author is incapable of crying, having grown too accustomed to suppressing her emotions as a survival instinct. Other assignments include writing letters of forgiveness or apology, or identifying the moment where they got “broken.” Outside that room, they have to keep their guard up. But the IF Project lets them be vulnerable for a brief time without recourse.

The film also gives insight into life in maximum-security prison. Orange is the New Black is praised for its realism, but The IF Project makes it look like a light-hearted comedy. These women can’t even touch each other. Their only physical contact occurs when a guard searches them. One inmate begins to cry as she reveals that she hasn’t been hugged in years.

During another writing assignment, the women talk about what they miss most from the outside. Much of it is minutia that we take for granted: Taking a bath, getting to wear your pajamas all day, using real silverware instead of crappy plastic utensils. In a nutshell, they miss having choices and free will. “You’re stripped of your dignity,” says one woman. “They tell you what to eat, and what to wear.” Meanwhile, “Life goes on without you.”

Some of Bogucki’s compassion comes from her experience living on the street for a week when she was in high school. That short amount of time was horrible enough to steer her back onto the straight and narrow. She possesses an all-too rare compassion in regard to her job. She sees the IF Project as a way to help not just prisoners, but also fellow police officers. It’s easy to become irreparably jaded in her line of work. She hopes the IF Project will help them understand the people they’ve arrested, to recognize them as human beings and to understand that they are meeting them at their lowest point.

To date, over 3000 women have participated in the IF Project It has since developed into an outreach program, with prisoners paired with a mentor to help them re-integrate during their first year post-release. Today, nearly a dozen prisons and juvenile detention centers across Washington State host the program. Bogucki’s next goal is to open a women’s center dedicated to reentry for former inmates.

The IF Project is required viewing. Prisoners make up a significant portion of the population, yet reside in a world where they’re treated as subhuman. They are broken people when they enter prison and they emerge even more damaged. Both Horan’s film and Bogucki’s program are making significant strides in returning the voice to the voiceless.