(A new restoration of The Conformist runs at Film Forum from Friday August 29, 2014, through Thursday September 4th. If you aren’t in NYC, it’s available in a DVD Extended Edition

. NOTE: This review was first posted on December 16, 2010, in conjunction with a previous run of The Conformist at Film Forum as well as MoMA’s Bernardo Bertolucci retrospective in January, 2011.)

Bruce Springsteen once said that when he went into the studio to record Born To Run, he dreamed of combining the best qualities of the rock and R&B he loved most growing up: “I wanted a record with words like Bob Dylan that sounded like Phil Spector—[and] I wanted to sing like Roy Orbison.” That kind of ambition, some variety of which can be found on all of Springsteen’s earliest (and best) albums, is also evident in Bernardo Bertolucci’s earliest (and best) films. The young director wants to be definitive, to do everything well: Form-bending modernist experimentation fused with sweeping movie-movie romanticism. The probing political analysis of his mentor Pasolini or his hero Godard, plus the bravura camera technique of a Welles or Ophüls. Intellectual rigor and operatic emotion and stylistic delirium. At their most inspired, these movies—I’m thinking primarily of Before the Revolution, The Spider’s Strategem, The Conformist, Last Tango in Paris, and 1900—are remarkably rich, full experiences: nourishment for the brain, feasts for the senses, swoon-worthy objects of reverence and desire.

1970’s The Conformist, Bertolucci’s fifth feature, may be his richest, fullest work. The story concerns Marcello Clerici (Jean-Louis Trintignant), an Italian civil servant in the 1930s who pledges allegiance to Fascism out of a desire to purge himself of secret shames and guilt stemming from an early-adolescent trauma. Clerici is about to make a safe, predictable marriage to the bourgeois airhead Giulia (Stefania Sandrelli), but his obsession with being “normal” at all costs pushes him to extremes; when his new masters order him to inform on his former professor, an anti-Fascist intellectual living in Parisian exile, he readily agrees. Once in Paris, he gains access to the professor’s circle, and becomes entangled with his old mentor’s alluring wife Anna (Dominique Sanda). Eventually, word arrives from Rome: the professor is to be killed. 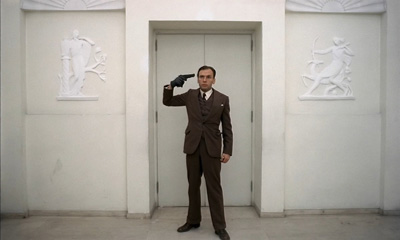 The Conformist is a whirlwind display of styles, an inexhaustible compendium of cinematic ideas. (Not for nothing has it been one of the most influential modern movies, sampled by Scorsese, Coppola, Spike Lee, and many others.) Several set pieces—the dance of the blind, the explication of Plato’s Allegory of the Cave, the climactic murder scene in a snowy wood—have become legendary, but every scene, virtually every shot, contains marvels of light, color, movement, and decor. (Vittorio Storaro’s cinematography, Ferdinando Scarfiotti’s production design, and Georges Delerue’s score are essential to Bertolucci’s achievement here; all three men reach the summits of their respective arts.) First-time viewers can rest assured that, however unreasonably high their expectations for The Conformist, they’re still guaranteed to leave the theater in a state of enchantment.

But it’s only with the second viewing, and beyond, that the film yields up its deeper meanings. Bertolucci employs a tricky, post-New Wave narrative structure, breaking up the tale’s chronology: the movie begins with Clerici being given his final, fateful assignment in Paris, then inches forward to the dramatic denouement while filling in the gaps with flashbacks, and flashbacks within flashbacks, concluding with a coda set on the day Mussolini steps down. Once you get how the story plays out, you begin to notice how elegantly various thematic motifs are woven into the fabric of the film—most prominently, the one of blindness, this being a dual study of a man who refuses to look into himself, and a nation that has lost sight of what’s most important. Note how Trintignant’s every gesture expresses Clerici’s pinched, crablike attempts to repress or deny his own nature, and how the sets, the architecture, the play of light and shadow, the camera angles and cutting, create a world of disorientation, misperception, flawed vision. And note also how the coda’s big revelation—that Clerici was mistaken about what actually happened during that life-changing moment from his youth—calls into question everything we’ve been led to believe about him. Since most of The Conformist is, in effect, “told” to us from his perspective, this suggests that the entire movie may be a kind of dream reflecting Clerici’s madness. In the film’s chilling last shot, he crouches in front of a metal gate, turning his head to look directly at the camera. His wide-eyed stare may at first hint that true awareness has finally begun to dawn, but the gate, framing him like the bars of a jail cell, leaves no doubt that he remains trapped in a prison of his own creation.