(The Complete Jean Vigo is now available on DVD

No filmmaker’s work surpasses Jean Vigo’s in sensual delight, stylistic wizardry, and imaginative wonder. Criterion’s new two-disc set is the first presentation of his complete films for the U.S. home-video market, and it’s a serious pleasure to see them in such high-quality digitally restored versions. Vigo died of complications from tuberculosis in 1934 at the tragically young age of 29, having directed three shorts and one feature. The two early shorts À propos de Nice (1930, 23 minutes) and Taris (1931, 9 minutes) are both documentaries; the first a satirical city-symphony sketch, the second a motion study of the Olympic-champ swimmer Jean Taris. These are the apprentice works, and stunning as they are—bursting with visual invention, and breathtakingly alive—they’re still only a warmup for the masterpieces to come. 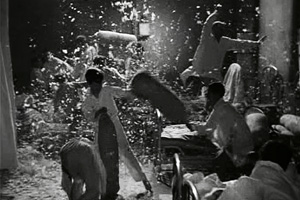 Zéro de conduite (1933) is a 44-minute-long tale of student rebellion in a boys’ boarding school. A quartet of troublemakers bands together to fight their cruel and repressive schoolmasters. The movie is a great middle finger raised in the face of authority; it looks back to the anarchic slapstick of silent comedy while anticipating the youth revolts of rock, punk, and rap. Vigo’s children instinctively question the grown-up world, with its seemingly arbitrary and pointless rules; what’s real to them is play, magic, superstition, daydream, hallucination. The children insist on the validity of their vision, and Vigo acts as their accomplice. He freely combines classical realist storytelling, expressionist distortion, surrealist dream imagery, avant-garde camera and editing effects, documentary’s concern for real environments, and even animation, trying on and discarding different styles with intuitive abandon.

One year later, Vigo made his first and only feature film, L’Atalante. A small-town girl (Dita Parlo) marries a barge captain (Jean Dasté) and leaves home to join him at sea; the young couple’s devotion to each other is tested as domestic dissatisfaction sets in. Vigo’s final artistic statement is a love story of shimmering, shiver-inducing beauty. It’s also a forever-tantalizing tease, in that it clearly shows the angry young man of À propos de Nice and Zéro de conduite maturing in different ways: wrestling with questions of adult happiness, harnessing his boundless gift for cinematic fantasy to the demands of long-form narrative, and attempting to navigate the commercial film industry. Where would Vigo have gone next? We can’t help but wonder—and yet, in his short time here he left a greater legacy than all but a handful of directors in the medium’s history. L’Atalante has a famous scene in which Michel Simon, playing the Falstaffian old sailor Père Jules, entertains the young bride in his cabin by showing her the exotic mementos he’s collected in a lifetime of travels: a deadly dagger, a life-size puppet, a pickled pair of human hands, and much more. Jules’s chamber of enchantments is the perfect metaphor for Vigo’s body of work (total running time, less than three hours): such a tiny amount of space, but you can find the world in it.