(Distributed by Strand Releasing, The Arbor opens theatrically at the Film Forum in New York City on Wednesday, April 26, 2011. Visit the film’s page at UK Distributor Verve Pictures to learn more. NOTE: This review was first published on April 28, 2011, as a “Hammer to Nail Pick of the Week” at the Filmmaker Magazine blog.)

“Time heals all wounds,” goes an old adage with which everyone involved in The Arbor would likely take issue. Clio Barnard’s cinematic assemblage on English playwright Andrea Dunbar is certainly a document of sorts, but to call it a documentary would be to slight it: The Arbor is equal parts fact, reenactment, and archival footage. Adding to the genre-blending is a series of audio interviews recorded with Dunbar’s siblings, children (particularly Lorraine, in many ways the main “character” of the film), and acquaintances, which Barnard then had actors lip-synch onscreen. The result is at first off-putting, eventually immersive, and unlike any other film that comes to mind. Barnard’s created artifact constantly blurs the line between its component parts and, in so doing, refuses to be pigeonholed as it relates the unresolved questions of its subjects. Cathartic revelations are in short supply here, but saying the film concludes unhappily seems premature because aspects of Dunbar’s story—namely, how it continues through Lorraine—are yet to be told. 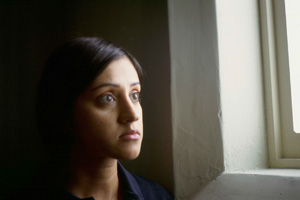 Dunbar emerged from a slum at the age of nineteen to have her first play produced and subsequently gained acclaim for Rita, Sue and Bob Too three years later. Plagued by demons related to her troubled upbringing which were ultimately exacerbated by a drug addiction, she collapsed and died in a pub at the age of twenty-nine. Barnard uses this strange and ultimately tragic life story as the launching point for an inquiry into the dynamics of filial dysfunction, substance abuse, and the genetic inheritance of both. “I wish I’d never been born,” Lorraine says at one point, echoing the sentiment she once heard her mother express. One broken home often leads to another, and sometimes our parents’ mistakes aren’t learned from but repeated. Lorraine is in the middle of such a cycle with no end in sight.

Tied to this is The Arbor’s built-in examination of memory. To her firstborn daughter, Andrea Dunbar is a half-remembered stranger whom Lorraine only knew for the first ten years of her life. Via interviews and other footage, Barnard brings new information concerning Dunbar to light, calling on the now-adult Lorraine to reconcile her perception of her mother even as it’s altered. Is this how things really occurred, Lorraine is forced to wonder, or is it simply how she’s remembered them? There are no rose-tinted glasses in The Arbor, no halfhearted calls for forgiveness. Unspoken grievances don’t go away; they fester in time, and the twenty-odd years since her mother’s death haven’t healed Lorraine’s wounds so much as covered them in a series of scabs that are constantly being picked at and reopened. Barnard’s film thus becomes not only a remembrance but a letter composed of equal parts confusion and resentment addressed to a long-gone recipient. 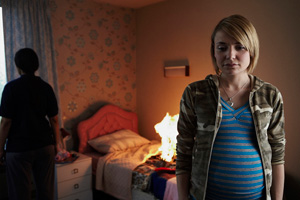 The form Barnard’s film takes on is not unlike a recollection itself. Consider: Those of us not blessed with photographic memories are often left to fill in certain cognitive gaps for ourselves, with sometimes-unfulfilling results. (I’m sure I’m not the only one to learn, years after the fact, that an event I recall with near-vividness never actually took place.) The Arbor‘s lip-synched amalgam of memory and thought deserves to be seen not as a mere stylistic flourish but rather as a fitting and, dare I say, innovative fusion of form and content. Despite the exceptional skill and nuance with which the actors deliver their lines—and, indeed, the facial expressions, gestures, and ticks that accompany them—there’s often something slightly “off” about their recitations; the degree to which disbelief is suspended varies a great deal, and even at its best the act of lip-synching is a deeply uncanny one. In much the same way that Barnard simultaneously alters Lorraine’s perception of her mother and forces her to adapt to it, she attempts to make us forget that what we’re watching isn’t “real” while drawing our attention to that same fact. As viewers, we’re made both aware and unaware of what we’re seeing. Whether Barnard intends for her film to be viewed as meta to this extent is debatable, but here we are.

The Arbor takes its title from Dunbar’s play of the same name, which in turn is named for the street she grew up on. To bring this point home, Barnard has her cast reenact scenes from that same play on that same street in a sort of infinite return. Twenty years after her death, she’s still on that street–what passes for the end is found in the beginning.