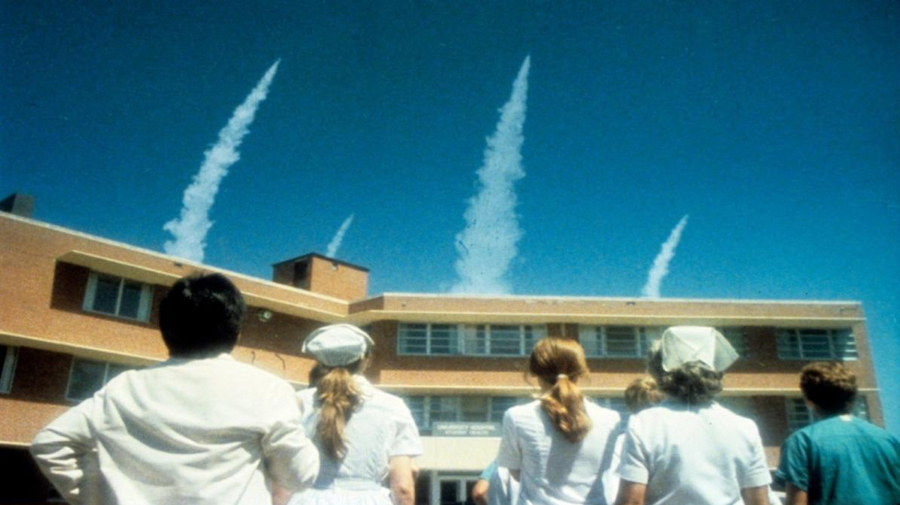 In 1983, the ABC television network broadcast The Day After, a “movie of the week” about nuclear holocaust. This was still the age of network primacy, during which ABC shared the home spotlight with CBS and NBC, with cable but in its infancy. What played on your TV, therefore, was a relatively big deal, culturally speaking, collectively viewed by tens of millions, if not more, and later discussed among friends and family, or around the proverbial water cooler. Most content was relatively mild in its narrative intent, avoiding the more controversial issues of the day, and certainly avoiding graphic displays of sex, violence or death. In his latest documentary, Television Event, Jeff Daniels (Mother with a Gun) – not the actor – explores the how and the why of ABC’s seemingly odd choice to risk financial loss and public censure by putting a movie on the air that showed the latter two of those taboo subjects. Were people horrified? Yes! But they were also moved, and Daniels, in a film as entertaining as it is profound, makes sure we are, too.

Using a veritable treasure trove of archival material that includes not only clips from The Day After, itself, but also copious pre-production and behind-the-scenes footage, along with other period clips for atmosphere and context, not to mention lengthy interviews with most of the surviving principal players, Daniels manages, in just 90 minutes, an impressively comprehensive portrait of what happened and its impact. Foremost among his subjects is the director of the film, Nicholas Meyer, who was fresh off his success with Star Trek II: The Wrath of Khan when he somehow came to the attention of Brandon Stoddard (featured here, as well, even though he died in 2014), then the head of ABC’s motion-picture division, as a likely candidate to helm his crazy idea. For those who were not alive back then, or who may have forgotten, the 1970s political détente between the United States and the Soviet Union had deteriorated under President Ronald Reagan, heating up the Cold War to a temperature not felt since the early 1960s. Stoddard and Stu Samuels, his VP, decided that a realistic portrayal of the dangers of nuclear war was just what the American public needed.

As it turned out, Meyer was no fan of Reagan, and leapt at the chance to discredit his policy of accelerating the arms race. Working off a script by Edward Hume (creator of the long-running ABC cop drama The Streets of San Francisco), he dreamed of not only alerting everyone to just how bad a nuclear attack and resultant fallout could be, but also of preventing a second Reagan term. We know how that turned out, but there are surprises in store, nonetheless, about the long-term effect of Meyer’s movie on future policy. Such a juicy tidbit is but one of the many pleasures within this gem of an historical document; the film is also a wonderful examination of the how of filmmaking, at least at that time, with production secrets revealed, to our great joy and, possibly, amazement. Meyer is a wonderful guide, passionate in his descriptions and fierce in his determination to revisit the past. Though the other aspects of Television Event hold our interest, it is really his show, as it should be.

Fortunately, people like his producer Bob Papazian and associate producer Stephanie Austin, as well as Stu Samuels and Ed Hume, are also quite forthcoming about the experience. Ken Adelman, Director of the U.S. Arms Control and Disarmament Agency in the Reagan administration, is on hand, as well, to discuss the serious reservations his boss and others had about The Day After once they got wind of its impending broadcast. Though they tried to have ABC make changes, Meyer refused – though he was taken off the picture for a bit over a different disagreement with his direct supervisors – and eventually the resultant movie was fairly close to his and Hume’s vision (though much shorter than the originally intended 4 hours). And so the nation was witness to a remarkably gruesome depiction of widespread, realistic Armageddon, followed by panel discussions and larger discourse on the matter. We were a country suddenly aware of the mortal threat, and, slowly, opinions shifted. Amazing to think, in our current age of social media, that TV mattered in such a way. But it did, and thanks to Daniels and his marvelous Television Event, we see the evidence. Lights, camera, boom!