(Richard Linklater’s seminal indie feature was released 20 years ago this summer. In celebration, 24 Austin-based filmmakers have crafted Slacker 2011, a collage/montage/homage, which premiered August 31 at the Austin Film Society. For our part, we’re re-posting Nelson Kim’s essay on the film, which originally ran on January 5, 2009. Buy the Criterion edition on DVD

, or watch it at Amazon Instant

A young man (the then-31-year-old writer, director, and producer) gets off a bus in Austin, hails a cab, and tells the driver about his theory that every choice we make in life creates an alternate world in which the choice we didn’t make becomes a reality of its own—and every choice made within that new reality then splits off into its own set of alternate realities, in a potentially infinite series of parallel lives. The cab stops and lets the young man out. He comes upon the body of a dead woman lying in the street, just killed by a hit-and-run driver. Another young man, with the look of a troubled loner about him, leaves the scene of the crime and goes to his house nearby, where he’s soon arrested by the police: he was the driver of the hit-and-run car, and his own mother was the victim. The police take the driver away as a young musician watches. Then the musician moves on to a street corner, playing his guitar and singing. A woman in a Fishbone t-shirt gives him some spare change, and we follow her into a coffee shop, past a table where a trio of friends are talking about literature. One of them gets up from the table and walks out of the coffee shop. Once outside, he’s accosted by a deranged middle-aged man talking about UFO abductions…

That’s the first 15 minutes of Richard Linklater’s 1991 feature Slacker. Over the subsequent 85 minutes, the narrative continues its method of introducing us to a character who then encounters someone else, whom we then follow until he or she meets yet another new character, and so on. There were precedents for this kind of storytelling, in which the tale moves from one protagonist to the next like a baton being passed—Max Ophüls’s adaptation of Schnitzler’s La Ronde, Buñuel’s The Phantom of Liberty, and Bresson’s final film, L’Argent. But Linklater, one of the most original thinkers among his generation of filmmakers as well as one of its most cine-literate, made the form his own. 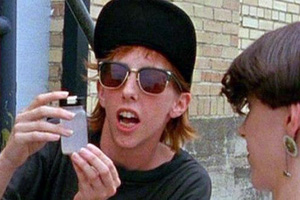 First and foremost, Slacker is a portrait of Austin at the time, or one slice of it—mostly young, mostly white, generally college-educated, aimless, and disaffected. (The title phrase wasn’t quite in mainstream circulation when the film was released; its cult success helped popularize the term.) Drift is the movie’s subject as well as its style. Its conspiracy theorists, artists and artist wannabes, neo-hippies, anarchists, bookworms, and all the rest have a lot to say, but most of them don’t do much, except sit around talking about what they want to do, or what they would do if they had the energy. Around the general topic of drift, Linklater floats some other thematic balloons—political alienation, work and how to avoid it, the suddenness and randomness (and inescapability) of violence in America, the way we pass in and out of each other’s lives. None of this, however, is underlined too heavily. Linklater wriggles free of any kind of obvious determinism or thesis-statement. The performers, mostly local residents and non-actors, improvised much of the dialogue, and for all that the writer-director has imposed a strict structural design on his material, the film’s feeling of anything-can-happen spontaneity, its stream-of-consciousness looseness, and its lovely openness to passing oddities, are tributes to his willingness to hand the story over, in a sense, to its characters and setting.

Seeing Slacker for the first time helped prove to me, as it did to many others, that there was a place on the edges of mainstream American cinema for bold personal visions. Of course, the movie ends with a scene guaranteed to stroke the nipples of any budding filmmaker: a group of friends take their Super-8 cameras out for a joyride, filming each other and everything else they see, and finally throw their cameras off a cliff; the last shot is the camera’s POV as it hurtles out into the air. That same spinning blur of energy was what I had seen when I got my first Super-8, took it onto the roof of my college apartment, and swung it on a rope around and around. But beyond this minor ode to film-geekery, the movie captures something bigger and more universal about being young: the conflict between ambition and indolence, the ceaseless shuffling of identities and philosophies, the sense that—as the passenger played by Linklater muses in the opening scene—on any day, at any time, an infinite variety of lives might be yours for the living.

NOTE: This review was first published on September 1, 2011, as a “Hammer to Nail Pick of the Week” at the Filmmaker Magazine blog.