and Blu-ray through Criterion. NOTE: This review was first published on August 25, 2011, as a “Hammer to Nail Pick of the Week” at the Filmmaker Magazine Blog.)

The history of Lee Chang-dong’s extraordinary Secret Sunshine is a textbook case of both the problems and the miracles at play in the current marketplace for international cinema here in the United States. The film, which premiered at the 2007 Cannes Film Festival (winning the Best Actress award for Jeon Do-yeon’s devastating performance), was featured in the U.S. that same autumn at The New York Film Festival. But despite critical accolades (the film won indieWIRE’s 2007 Best Undistributed Film poll in a landslide), Secret Sunshine remained in limbo for over two years, with no American distributor willing to acquire it. Unexpectedly (to me, anyway), in 2009, IFC Films plucked the film from obscurity and, after a year or so on the shelf, Secret Sunshine was released in late December of 2010, more than three and half years after its premiere, this time to a chorus of critical raves, relative audience indifference* and limited box office**. The Criterion Collection release of Secret Sunshine, reviewed here in its Blu-ray presentation, offers an opportunity for redemption for this film, a chance for audiences to give it the attention and care that is long overdue.

Trying to withhold as many spoilers as I can: 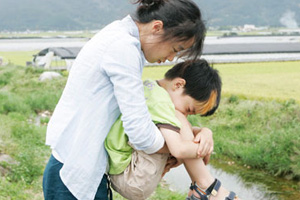 Secret Sunshine is the story of Shin-ae (Jeon), a young widow and mother who moves from Seoul to her deceased husband’s hometown of Miryang (which translates from Chinese into Korean as “Secret Sunshine”) in order to offer her son Jun (Seon Jung-yeop) a chance at a simpler life. Miryang is like any small town, full of everyday people living ordinary, fulfilling lives, but also home to gossip and envy, nosy neighbors and many secrets. As she begins to establish herself in Miryang, Shin-ae catches the eye of a local mechanic named Jong Chan (Korean superstar Song Kang-ho) who dutifully follows her around like a heartsick puppy dog. But when tragedy suddenly strikes, the film makes a dramatic shift from a provincial comedy into the realm of tragedy and grace.

Seeking shelter from the overwhelming sense of loss she has experienced, Shin-ae, acting on a suggestion from her neighbor, finds solace at a Christian revival meeting. Transformed by the forgiveness she experiences, Shin-ae begins to build her life along the road to redemption and faith, with Jong Chan supporting her every step of the way. When Shin-ae decides to offer forgiveness on her own terms, her faith is shattered, forcing her into direct conflict with God and back to the reality of her own suffering. 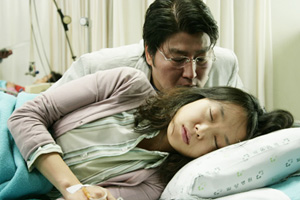 Lee’s direction is subtle and understated, his gentle touch and unadorned style offering center stage to Jeon’s moving performance as Shin-ae. The decision to have the film’s stylistic strategy mirror the simple, stripped down values of the small town experience it portrays works wonders, allowing broad tonal shifts and narrative surprises room to resonate throughout. Even in its darkest moments, Secret Sunshine transforms its tragedy with laughs while the comic situations always carry an unshakably tragic subtext, all of which serves to enrich Lee’s elegant visual style by way of story and performance.

But what makes the film special, and so timely for American audiences, is its central examination of religious faith (and faithlessness) as a deeply human experience, one fraught with hypocrisy, redemption and grounding in the context of real life. While Lee takes time to aim his camera (and narrative) at the heavens (the film’s opening shot of the sky is repeated at transformative moments throughout the film), he understands completely that the vagaries of human experience are far more important to belief than anything supernatural. The film ends with the camera panning to a patch of dirt, the tangible reality of terra firma a bookend to the film’s speculative opening shot of the sky, Shin-ae restored from the heavens back down to the earth, an imperfect, mortal world. 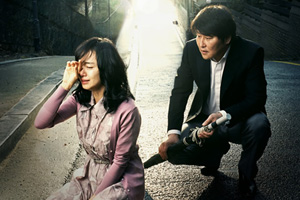 Produced under the supervision of and approved by Lee Chang-dong, The Criterion Collection Blu-ray release of Secret Sunshine is essentially flawless; presented in its original 2.35:1 aspect ratio (Cinemascope) with 5.1 digital surround sound mastered at 24 bit from the original digital audio master, the film could not look or sound better. While the film was shot on 35mm, the digital transfer is sparkling, created directly from the original camera negative. The Criterion Collection have a reputation as the finest producers of DVD and Blu-ray for a reason; the care and attention given to this transfer is obvious, but to call it “typical” of Criterion is to take for granted just how recently home video transfers of foreign titles suffered at the hands of so many distributors. I can’t speak highly enough of the technical prowess of this disc; it’s simply a beautiful presentation that wants for nothing.

In addition to the film itself, the Blu-ray contains three bonus features; IFC’s original theatrical trailer (which, like most trailers, is interesting only in how it tends to misrepresent the complexity of the film for the sake of marketing it, which, fair play), a small piece with Jeon Do-yeon and Song Kang-ho being interviewed and mugging on the set (not presented in high definition) and, of most interest, an interview with Lee Chang-dong himself, presented in high definition, which cuts in scenes from the film to underscore Lee’s impressions and anecdotes about the process of making the movie. Interestingly, Lee’s stories seem to contradict the experiences articulated by his actors, but I’ll leave it to the viewer to uncover the conflicts. Finally, the Secret Sunshine package comes with a booklet, featuring critic Dennis Lim’s thoughtful examination of the film; I suggest reading it only after watching the movie itself. 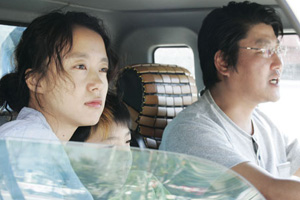 Ultimately, if it were not for distributors like IFC Films (or Magnolia Pictures, who released Lee’s follow-up film Poetry, also available this week on Blu-ray), films like Secret Sunshine might never see the light of day in this country. Instead, thanks to IFC’s invaluable partnership with The Criterion Collection (which has featured films like A Christmas Tale and Summer Hours in the past, with Carlos and Tiny Furniture seeing a release in the coming months), audiences can savor this sterling Blu-ray presentation of Secret Sunshine. With so many great films out of the reach of the vast majority of American film lovers, Secret Sunshine is cause for celebration.

*If you have not seen the film yet: the idea of releasing Secret Sunshine during the Christmas holiday season is a wonderful piece of “counter-programming” that tickles me, but truly, this movie, which features a rejection of Christianity played for dark laughs, had no chance at all in late December.

**Because of the absence of VOD revenues from published “box office” numbers, no official box office total for the film is available to the public.

[A final reminder: all of my Blu-ray discs are screened on a consumer grade Blu-ray player (in my case, a Sony Playstation 3) connected to a 50” Panasonic PX75U Plasma television (the display settings of which I have customized for my home lighting environment to deliver what I consider the best “cinematic” image I could create) and a Sony 5.1 digital receiver with a six speaker array. Your mileage may vary depending on your home video set-up.]