(Raising Arizona was released in 1987 by 20th Century Fox. New Beverly Cinema in Los Angeles is screening it on Friday, May 13, 2011. If you can’t make that, you can always buy it on DVD

. Of course, you probably own it already.)

Raising Arizona is notable among the Coen Brothers’ filmography for seamlessly fusing the ravishing grimness of their drama with the slapstick antics of their comedy. Populated as it is by bizarre individuals and endlessly quotable dialogue, the film no doubt leans closer toward the latter pole at first glance. A close look at its characters, however, reveals a cast of orphans whose plight darkens the film considerably: newborn Nathan Jr. is forcibly taken from his parents by an infertile couple in the film’s main plot line; a biker has a tattoo which reads “mama didn’t love me”; two escaped recidivists blame their time in jail on not being breastfed by their mother. Raising Arizona has as its antagonist the above-mentioned “lone biker of the apocalypse” Leonard Smalls whose every appearance onscreen is accompanied by ominous-sounding choral music—as if heaven itself fears his arrival—and flames that evoke hellfire. Not only the film’s antagonist, Smalls is the first clear incarnation of inexorable evil in the Coens’ oeuvre, a recurrence that now has its best-known exemplar in No Country for Old Men‘s Anton Chigurh but finds a far more explicitly chthonic embodiment in the leather-clad biker.

The Coens don’t tread lightly here. From wantonly shooting small animals he zooms by to his cooly sinister mannerisms, there’s no mistaking that Smalls is born of hell. What’s most striking about him, however, is that he has a sort of brother in H.I. McDonnough, the hero of Raising Arizona. Opposites but equals, both sport a tattoo of a bird often mistaken for Woody Woodpecker but actually the logo for an auto parts manufacturer, the obscurity of which only serves to strengthen their bond. Their ways of life are vastly different, but they’ve one important commonality: both know what it means to be alone. When (spoilers herein) H.I. realizes he’s bested Smalls in their climactic battle, it isn’t with a sense of triumph. Instead, he tells him he’s sorry—and means it. 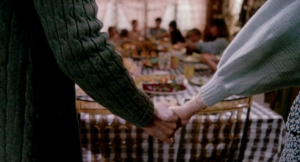 Endlessly optimistic as well as a tad naïve, H.I. is perhaps the Coens’ most endearing protagonist. (My Nic Cage bias is well-documented, but rest assured that, in chicken-egg terms, my love of Raising Arizona came first.) He speaks with a drawl that only enhances the eloquence of his wistful worldview—such lines as “Edwina’s insides were a rocky place where my seed could find no purchase” and “sometimes it’s a hard world for small things” make this plain—and is honest even when robbing a local convenience store. No mention is ever made of his parents, and his wife Edwina is the only family he has. This, of course, is the source of their despair, which is shared by others and seeps through the whole of the film.

In meditating on family and parentage (or lack thereof), the Coens romanticize the ideal family unit even as they highlight its unattainability. “It ain’t Ozzie and Harriet,” says H.I., and it’s true: filial hardship abounds in Raising Arizona. And though they focuse on the characters who seem to have come from broken homes themselves, the Coens show both sides of the coin. Family life in general and parenthood in particular are shown as uphill battles. “Me and you is just a fool’s paradise” Ed says to H.I. at one of their darker moments, and they’re far from alone. Raising Arizona is a rogue’s gallery of of broken homes and tumultuous relationships. The mere act of buying diapers necessitates theft, which in turn leads to getting shot at and chased by dogs. Nathan Jr. becomes a coveted prize for whom each of the film’s many factions vie; some do so under the guise of collecting a monetary reward, but others are more honest about using the child as a means of filling the voids left in their lives. More than just a baby, he comes to represent the perfect nuclear family none of them have ever had (and, just as likely, never will have). This is made further evident when H.I. dreams of Nathan Jr. after he and Ed resign themselves to a potentially childless life and return the boy to his parents, thus ending the cycle that birthed their actions. In sacrificing their own happiness, they secure his.

Raising Arizona is an intensely bittersweet film. That it is admittedly hilarious distracts from this sorrow, but it doesn’t dampen it. If not the absolute best by the Coens, it’s certainly their most charming. The beauty of its vision is best conveyed by H.I.’s narration of his prophetic dreams. The progression of these three dreams—from a dark invocation of the biker to worries over H.I.’s marriage to a vividly impressionistic glimpse of the future—is the Coens’ most subtle statement on the presence of melancholy even in the happiest of times. I quote from the last of these, which closes the film, for lack of anything to add to the lyricism of its words:

“This whole dream, was it wishful thinking? Was I just fleeing reality like I know I’m liable to do? But me and Ed, we can be good too. And it seemed real. It seemed like us and it seemed like, well, our home. If not Arizona, then a land not too far away where all parents are strong and wise and capable and all children are happy and beloved. I don’t know. Maybe it was Utah.”