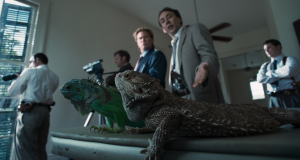 It’s easy to be dismissive of Nicolas Cage, and people often are. One need look no further than YouTube or this week’s celebrity gossip rags for incontrovertible evidence that the Oscar-winner’s eccentricities extend far beyond the screen. Amid the freak-outs and hairdos, however, people tend to lose sight of one very important fact: Cage is a supremely gifted actor. The main reason people so often forget this, were I to venture a guess, is that Cage doesn’t have much of a middle range. His films tend to be either low-profile fare that nobody sees (Leaving Las Vegas) or such would-be blockbusters as Season of the Witch and Drive Angry, with little in between. Most moviegoers are thus far more familiar with his laughable material than the great movies he’s helped shape (of which Raising Arizona, Bringing Out the Dead, and Adaptation, to name a small few, immediately come to mind). It’s not that he’s made more bad movies than anyone else; it’s that they’re bad in an over-the-top, absurd way that’s seemingly unique to Cage. Even so, he himself is a marvel to watch.

Wild at Heart, to date Cage’s sole collaboration with the just-as-bizarre David Lynch, was the first film to get me to notice the actor’s best qualities. The Wizard of Oz-inspired tale finds him at his most unrestrained and eccentric, traits matched by the rest of the film’s off-kilter milieu. As a snakeskin jacket-clad rocker named Sailor on the run from girlfriend Lula’s psychotic mother, Cage encounters no shortage of Lynchian curiosities along the way: mosh pits, murderers, and Willem Dafoe abound. Through it all, Cage maintains a distinct sense of who this character is and why he acts the way he does. Werner Herzog’s Bad Lieutenant: Port of Call New Orleans, which made less money at the U.S. box office than the recent “Nic Cage losing his shit” video has views on YouTube, is a much more recent example of this. It allows the subtler shades that color Cage’s best performances to shine through; in moments peppered throughout the film, he provides a needed balance to the nutso ramblings and iguanas that make up Bad Lieutenant‘s more attention-grabbing elements. I pair the two films not only as a sampling of the noted auteurs with whom Cage has worked but also as evidence that the actor coming unhinged isn’t a flaw but, rather, a feat unmatched by any of his peers.

I’m not the first to write of Cage in this manner; Rogert Ebert did so in his Great Movies entry for Adaptation and A.O. Scott, in a piece on good acting in bad movies, recently claimed that “it is something like a mathematical certainty that the greatest actor in the world today is Nicolas Cage.” (It’s worth pointing out that, though both beat critics me to the punch, I started writing this piece independently of these two articles in May of last year, when I first watched Bad Lieutenant. I’ve no way of proving this, but seriously, who would make something like that up?) Both touch on the important point that, whether reserved or unhinged, Cage’s performances are always memorable for their sincerity. He’s many things—singularly strange, erratic in his choice of films, potentially insane—but an ironist isn’t one of them. No matter how terrible the film, Cage never phones it in. That so many moviegoers are either unaware of or indifferent to this fact is, if not cause for despair, certainly a reminder to look a little more closely at an actor for whom first glances never suffice.

MEETING GORBACHEV
Back in the USSR