(Pariah is now available on DVD

. It world premiered at the 2011 Sundance Film Festival and was picked up for distribution by Focus Features. I was released theatrically in several cities on December 28, 2011, before expanding in the following weeks. Visit the film’s official page at the Focus website to learn more.)

With Pariah, a buoyant tale of a young, middle-class New York lesbian’s tough coming-of-age amid the class and cultural proxy battles that simmer within black America, lauded newcomer Dee Rees has made one of 2011’s most unlikely and richly welcomed directorial debuts. Rees, a 33-year-old Nashville, Tennessee, native who graduated from NYU’s Graduate Film Program around the same time she both wrote the feature screenplay that would become Pariah and came out to her own parents, directed a 30-minute version of the story that became one of the most celebrated short films of 2007. She doesn’t think of her debut as autobiographical, but it clearly tells a story with much at stake for her, one that feels informed by the disappointments of a youth spent in alienation from those you hope will—but don’t expect to—come to terms with your identity.

Pariah is a study in the ways in which young blacks caught between social worlds are often forced to wear emotional and physical masks. It suggests, with much hard-won wisdom and even more care and understanding, that traditional African-American social and cultural mores often don’t make room for young queer women. The film, which runs a bit long but never feels like it’s reaching for something outside of its grasp, exhibits a sensitivity to the nuances of class and style among city-dwelling blacks that is truly rare in American cinema. While it falls into the Precious trap by once again having a black mother as the moral fall guy (or gal), it isn’t because of destitution, or drug use, or poverty, or neglect; it’s the far more common affliction of over-protection and ignorance, of a muddled understanding of one’s responsibilities as a Christian woman to love above all else. 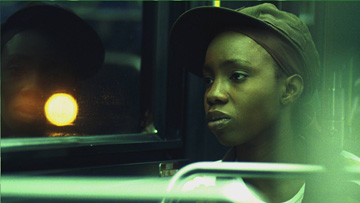 Aided by her remarkably talented cinematographer Bradford Young, who brought a similar grace to the palette and shooting style of the under-appreciated 2009 Slamdance entry Mississippi Damned (perhaps still the best recent American independent film without theatrical distribution). Young brings a deep hued, emotionally satisfying visual dynamism to the project, using color as a harbinger of emotional turmoil as well as any American film in recent memory. That a film this visually accomplished could be made in a mere 16 days on a shoestring budget in Central Brooklyn is a testament to Mr. Young’s myriad gifts, producer Nikisa Cooper’s ingenuity, and Rees’ grit and economy.

Rees clearly has a tremendous amount of dexterity with her performers as well. She wins able supporting work from much of her cast (although Viola Davis would probably have made a better mother than Kim Wayans). Her fantastic young lead, Adepero Oduye, who starred in the short as well, creates a performance of such emotional maturity that one must recall that, despite seeming like a newcomer, she is now a savvy young veteran of some of the most celebrated recent indie films to come out of Brooklyn (Half Nelson and On the Outs among them). An IFP Narrative Lab film, Pariah represents an outpouring of talent from artists who will likely be with us for quite some time; it’s a film that signals the beginning of long, fruitful career for Rees and her fantastic young lead Oduye.