(New Jerusalem world premiered at the 2011 International Film Festival Rotterdam. Distributed by Factory 25, it is finally available for public consumption on November 30, 2012—theatrically, in New York City at Videology, and on VOD through iTunes, Amazon, Xbox, Playstation, VUDU. Visit the film’s official website to learn more.)

“What’s walking? If you stop on one of your feet, then you’re not walking, it’s just balancing, balancing, balancing,” Will Oldham’s character Ike wonders as he moves from one leg to the other. Ike is saying this to his depressed co-worker Sean (co-writer and star Colm O’Leary), in the hopes of reaching a higher truth, one he can’t exactly find. “Like most things, it doesn’t stand up to much scrutiny,” Sean responds, ending the conversation with finality, with no invitation of a response. In Rick Alverson’s New Jerusalem, Ike anoints himself Sean’s savior and attempts to fill the void in Sean’s personal life with organized religion, specifically his own belief in Jesus.

Sean finds life difficult enough that at times he cannot do it, he has no choice but to just stop. Working at the garage with Ike mending old tires, Sean escapes to the bathroom, turning on the sink for it to sound occupied. He slumps onto the floor, without the energy to get up. Things are no better in private. If anything, he is then trapped with only himself, without the solace of distraction. Ike sees Sean’s despair and takes it upon himself to show him another way. Sean is skeptical by reflex, has a wall up against religion it has taken 20 years to build, but he is also lonely and so allows Ike’s advances. Ike says grace before meals, makes Sean a cassette tape of religious recordings, and brings him to church. He expects nothing in return other than the satisfaction that Sean gets “better.”

New Jerusalem—the title taken from the Book of Revelation—is a world made up of occasional meetings, parting glances, rare connections. A neighbor asks Sean to take care of a sick cat, afraid it will upset his daughter to watch it die. Sean is allergic and “has never taken care of a living thing before,” but is unable to say no and so is saddled with it. When he and Ike go paintballing with some friends, they make sure to say grace before devouring their fast food, but then talk about how amusing it would be to shoot a woman with a paintball gun: “It’s legal,” one of them says, mouth full. Sean’s only romantic interaction is with a store clerk (Roxanne Ferris) and little is said between them beyond the exchange of 62 cents for a tin of cat food. This is what passes for human interaction around here. 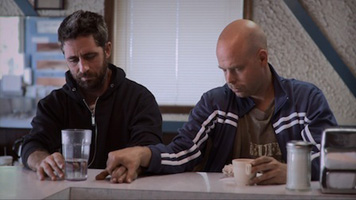 A film about depression can be hard to actualize visually; much of New Jerusalem is spent watching Sean wallow. In fiction, David Foster Wallace’s “The Depressed Person” being one such example, the action can not only infiltrate the inner workings and agony of the mind, but the prose itself can pantomime the obsessive behavior of a person depressed. Without this possibility, and forgoing voice-over which in this story would feel tacked on and pat, Alverson (as cinematographer and editor) instead maroons Sean by using shallow depth–of-field and deliberate framing. By himself, Sean is seen either at a distance, utterly alone, or claustrophobically close, with nowhere to go. When in a frame with Ike, Sean is still trapped in his solitude, with Ike an arm’s length away, yet what feels like a city block, all out of focus.

Sean starts taking anti-depressants; Ike, suddenly aggressive, exclaims to Sean that the doctor is trying “to turn you off.” Sean responds, “I’m done with the hocus pocus,” with Ike fervently nodding his head: they both wish to expel unwanted magic but are talking from opposing viewpoints. Oldham’s Southern charms enable him to wrap his religious beliefs in a warm, guiltless smile—he knows his path is virtuous. Singing a song with his father, “Take My Hand Precious Lord,” he tries to show Sean the faith he has, its strength and purity, its just path. After dinner, Ike washes Sean’s feet, then thanks him for it, saying he is grateful for the visit, the indoctrination complete. Sean knows the depths of his solitude, and the potential reprieve Ike and religion can bring.

Ike’s world does not include half-truths: you’re happy or you’re not, you believe or you don’t, something is right or it’s wrong. Sean’s problems might not have answers; he may have to live with them, make them his home. Alverson has given Sean the power to choose.