Misconception is a documentary in three parts that tackles issues of global population growth and population control and takes the viewer on a journey from China to Uganda, via Canada and the United States. From director Jessica Yu (Ping Pong Playa), this cinematic triptych may ultimately be less than the sum of its parts, but since those individual parts each feature well-told and compelling stories, the overall movie still more than holds one’s interest. The title of the film is a bit unfortunate, however, since the choice to stitch these three stories together could be seen as “misconceived.” Nevertheless, as separate short documentaries, each thread offers an absorbing enough narrative tapestry to justify its existence in its own right.

After an opening framing device, narrated by Kyra Sedgwick (TNT’s The Closer), in which Yu compares countries like Russia (with a low birth rate) and India (with a high birth rate), we begin our first tale, in China, where the long-standing one-child policy has led to a generation of “little emperors”: single men raised as only children, who far outnumber single women (female children being less desired). Yu follows one such lonely guy, named Bao Jianxin, who on the cusp of his 30th birthday is determined to find a wife. It’s a truly fascinating story – kudos to Yu and her team for finding this young man – and could easily be expanded to a feature-length film unto itself. 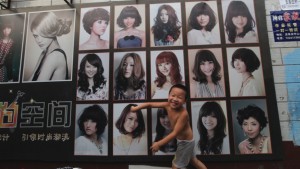 Next we travel to Canada, where we meet a former drug-addict-turned-anti-abortion-activist, Denise Mountenay, as she prepares to travel to New York to lobby members of the United Nations in support of her cause. Her main concern is with the term “reproductive rights,” towards the use of which the U.N. shifted in the 1990s when it chose to abandon mandatory birth-control programs. While Mountenay comes across too strongly for some of the folks she approaches, Yu points out that global support for family planning appears to be waning, so perhaps the efforts of Mountenay and her cohorts are reaping actual rewards.

Finally, we find ourselves in Uganda, where journalist Gladys Kalibbala works to find homes for abandoned children. Uganda has no family planning to speak of, and the result is a nation with many unwanted babies. We follow Kalibbala through squalid slums as she does her best to advertise her country’s significant problems.

Between each segment, along with Segdwick’s narration, we hear the thoughts of self-described “edutainer” Hans Rosling, who eloquently explains the facts of global population growth, including this nugget: perhaps, even without family planning, we will still see some form of stabilization, if we can just guarantee greater education for all, since educated women have fewer children. It’s all fairly captivating stuff, though more smorgasbord than carefully orchestrated three-course meal (which may not be a problem for some). Whatever your own thoughts on the film’s structure, what’s undeniable is the need for all of us to consider the issues it raises.