MARJOUN AND THE FLYING HEADSCARF 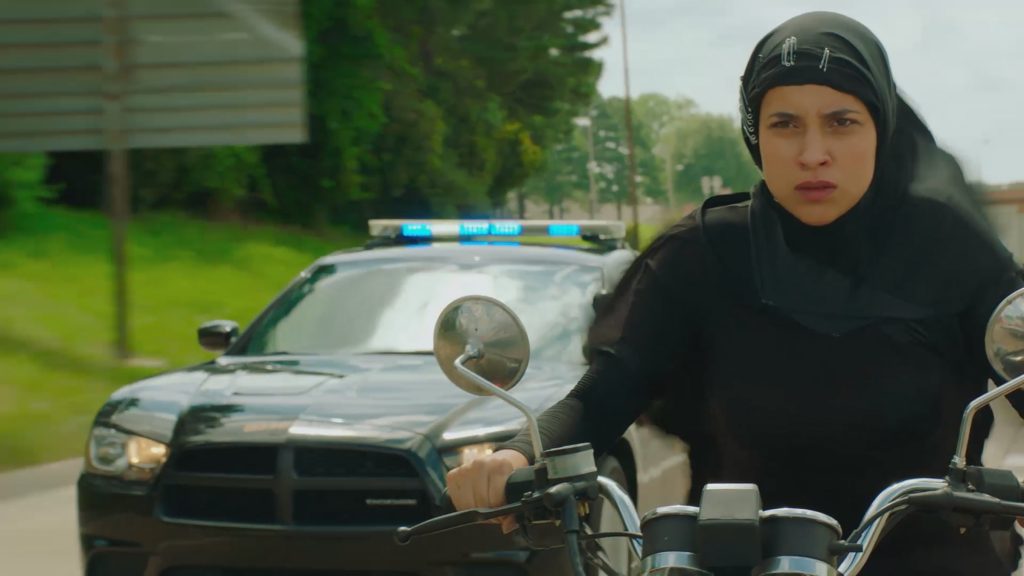 (Susan Youssef’s Marjoun and the Flying Headscarf landed online on July 14, 2020. Like what you see here on Hammer to Nail? Why not give just $1.00 per month via Patreon to help keep us going?)

An emotional roller coaster of a coming-of-age tale, director Susan Youssef’s Marjoun and the Flying Headscarf follows its titular protagonist from tragedy to tragedy until the terrifying weight of the world becomes almost overwhelming. The resultant catharsis is powerful, the journey profound. Along the way, Youssef (Habibi) explores the destructive results of ethnic profiling, sexual abuse, teen angst and much more. If the competing topics come together in a sometimes chaotic mix, competing with each other for attention in the movie’s brief 84-minute running time, the entire affair is nevertheless brilliantly held together by the performance of lead actress Veracity Butcher (Francis of Brooklyn), who makes of Marjoun a strong survivor, rather than victim, leading by example as she strikes a blow for women – and Arab and Arab American women, in particular –  everywhere.

Set in the decade following the September 11, 2001, attacks, in Little Rock, Arkansas, Marjoun and the Flying Headscarf opens with exactly what its title promises: Marjoun, riding a motorcycle, her hijab billowing in the wind; behind her follows a police cruiser. Cut to how we got here, the story jumping back to the aftermath of family trauma in the wake of Marjoun’s father’s incarceration. A local businessman – owner of a convenience store – and husband and father of two girls, Aabid (Tarek Bishara, Tape) seems an unlikely terrorism suspect, but the federal government has apparently decided that the large sums of money he sends back to family in Lebanon is suspect, and so off to jail he has been sent, his civil rights abrogated. This has plunged his wife Amani (Clara Khoury, Inheritance) into a deep depression and left 17-year-old Marjoun and her younger sister, Jinane (Maram Aljahmi), to fend for themselves. The future looks grim.

With the arrival of family friend Sami (Dominic Rains, A Girl Walks Home Alone at Night), called down from New York by Aabid to help run the store, the situation might improve, or at least so hopes Amani, bereft and at a loss of what to do. But Sami has his own agenda, which may or may not prove helpful, and a way of looking at Marjoun that is far less than appropriate. And so this vibrant young woman takes refuge with a wannabe boyfriend who is sweet, if unable to fully comprehend the roiling tempest within her. First order of business is to get dad out of jail, a task to which Marjoun applies her energies and skills beyond due diligence, achieving remarkable results in a short amount of time. Life, however, may get in the way.

With exquisite attention to detail, Youssef follows her characters through their travails, exploring an extraordinary amount of narrative territory in such a short feature. Though sometimes she succumbs to the temptations of exposition where more visual storytelling would better serve her purpose, at other times she exhibits perfect restraint, such as when Marjoun decides to wear a hijab, something Jinane has done throughout, in a show of solidarity with her imprisoned father. Though fully assimilated in American society (and Jinane speaks no Arabic), the two sisters nevertheless understand that they are constantly “othered.” Why not, then, embrace their Lebanese and Muslim heritage with pride?

Unfortunately, the film is not without its limitations, particularly in the pace of the editing. While on the one hand it is cinematically commendable how much material Youssef is able to cover with her fantastically quick transitions between scenes and frequent refusal to linger on particular moments, Marjoun and the Flying Headscarf needs more room to breathe to fully involve the audience in its emotional journey. The sprints we take would be more effective if we occasionally walked, or even just stood around for a while. For a critic who so often wishes the films he watched were shorter, I actually here wanted more, delivered at a slower tempo. As it is, Youssef’s movie is still a powerful statement of defiance and agency, well worth watching, just as Marjoun’s trajectory is well worth celebrating.

A Conversation with Jeremiah Zagar (WE THE ANIMALS)