(Lake Tahoe is being distributed by Film Movement. It opened theatrically at Anthology Film Archives on Friday, July 10, 2009, and is now available on DVD

Mexican director Fernando Eimbcke’s debut feature, Duck Season, was a delightful lazy-day-in-the-life comedy about adolescents killing time. At first glance, his follow-up, Lake Tahoe, seems to drift in a similar breezy key, confirming Eimbcke’s status as the preeminent modern chronicler of lazy days and long afternoons. But as the daylight fades and we discover what has been causing the film’s young protagonist to act so remote and stiff, drama arrives in the form of mourning.

The adjective ‘slight’ is usually used as a pejorative when talking about movies. In the case of Lake Tahoe, until the film’s closing scene, I would have used that term and meant it as an unabashed compliment. Yet in that final encounter between Juan (Diego Catano) and his little brother the following morning, Eimbcke justifies the title and ends the picture on a perfectly bittersweet note. At that moment, Lake Tahoe feels anything but slight.

Juan is young, but he’s old enough to drive. When we meet him, he’s just lamely driven his car into a pole. Not enough to cause major damage, but enough to keep it from starting up again. Was it an accident? Was it intentional? We don’t know, and from the looks of Juan, neither does he. In a dazed stupor (drugs? sleep deprivation? unintelligence?), Juan seeks out an open garage and a mechanic that will get his car up and running again. 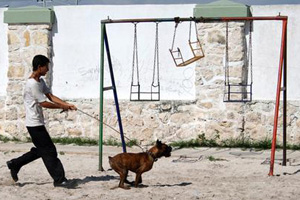 The location is Puerto Pregose in Yacatan, where things are moving pretty slow. The only people around are truly off-kilter. First, Juan gets mistaken for an intruder by an old man, Don Heber (Hector Herrera), whose dog is named Sica (if that name sounds familiar, it should). Then, Juan arrives at a shop where the cute punk rock counter girl, Lucia (Daniela Valentine), has him hold her newborn baby. The shop’s expert, David (Juan Carlos Lara), is another teenager who just so happens to be infatuated with martial arts cinema. At the mercy of these wacky characters, Juan silently accepts his fate. It isn’t until he makes his way home several hours later that we understand how fate has handed him a much heavier burden.

As Juan, Catano shoulders his character’s weight literally, using posture instead of dialogue to convey his emotionally detached state. Again, this at first seems to be a strictly comic choice by Eimbcke, making Juan a straight man for the quirkiness surrounding him. But gradually, this somnambulistic behavior begins to make sense. More than that, it provides an unexpected emotional wallop when Juan’s true emotions finally rise to the surface.

Eimbcke explains Juan’s predicament early enough into the film, but I don’t want to reveal it here. I didn’t know it was coming, and I’m glad that I didn’t. That said, I now look forward to revisiting Lake Tahoe so that I can rewatch it with this awareness in mind. This is one of those movies that promises to work even better the second time around.

It’s impossible to watch Eimbcke’s first two features and not think of the world of Jim Jarmusch. Perhaps it’s the graduation to color from black-and-white, but Lake Tahoe has more of a tonal kinship with Mystery Train and Night on Earth. In a multi-character and fractured-narrative sense, Eimbcke plays it less friskily than Jarmusch, yet his employment of wide, static shots and his droll sense of humor—replete with pop culture references—places him firmly in the Jarmusch camp. Still, the personal story Eimbcke is out to tell makes it feel like a vision of his very own.

Completing the feeling of slightness is the length, which is a brisk 73 minutes (it’s listed as 80+ everywhere I’ve checked but I timed it and the film itself ends at the 73-minute mark). Here, again, Eimbcke shows his directorial maturity. He could have certainly made his picture longer, but that wouldn’t have necessarily made it better. He could have used a score to create more emotion, but he didn’t. By telling his story so matter-of-factly, he reflects Juan’s internal state of numbness, and sideswipes our emotions even further at the end. Lake Tahoe isn’t just another lazy-day-in-the-life comedy. It’s a story about grief and coming to terms with the realization that one won’t be taking a family vacation ever again.