Fb. In. Tw. Be.
Drama
Latest Reviews
On the Festival Circuit
Reviews

(Joy de V. has its World Premiere at the 2013 Slamdance Film Festival. It screens on Sunday January 20th at 7:50pm and Wednesday the 23rd at 12pm. Visit the film’s official website to learn more.)

Joy de V. has a storyline that sounds like an old Warner Brothers black and white—Roman (Evan Louison), a con man scraping together a living, is married to Joy, a woman he adores— she’s seven months pregnant and her wealthy family wants to pull them out of their modest love-nest and give them a big house. When she abruptly goes missing he has to go on a twisting, turning odyssey through New York City to try and find her. Like the directors of the French New Wave, writer/director Nadia Szold cleverly riffs on Film Noir for an iconoclastic piece with contemporary, personal concerns.

Szold favors a rich and dense aesthetic, filling her frames with detailed production design, going off on narrative detours and indulging in flourishes along her maze-like trajectory, spicing the sauce with lots of idiosyncratic characters. D.P. Tristan Allen uses warm, burnished tones and brings new life to a range of antique lighting effects. He captures elements of rich color in even the simplest shots, enhancing the film’s storybook quality. Szold’s vision of New York City is a departure from the stylized, insular versions typically seen on film post-Giuliani. There are no lofts or trendy new clubs—Roman digs through a multi-generational city whose history seems to be alive, lurking behind doorways, oozing from scarred walls.

The film navigates from inside Roman’s fevered mind. After losing Joy, he’s cast adrift in a world of Woman and Her many faces. An embittered harpy at a bar seems to make a divination, telling him to “mourn your love not.” A beautiful French temptress tells him to “come help me with my glass of wine—I insist.” He grabs her glass and drains it, which leads to a gorgeously staged seduction, followed by a kiss and then some. Later, a no-nonsense psychic with hypnotic cat eyes looks right into him and warns him about the state of his soul.

There are a number of elaborate scenes with an undercurrent of wry humor. Dressed as a priest, Roman performs an elaborate con on an elderly woman played by none other than Claudia Cardinale: as his accomplices steal her jewelry he theatrically sounds her out about her past sins; she looks up at him with wonder and delight as he seems ready to beat her with a cane. 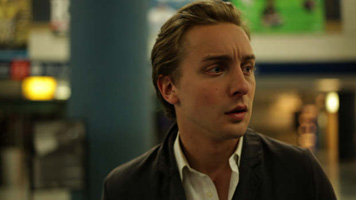 Roman is seemingly rudderless—his only guiding principle is to find his Joy. It would be hard to imagine anyone other than Louison in the role: he powerfully conveys the intensity of the emotional rollercoaster he’s riding, speaking volumes with his eyes like a silent movie star. He has a big-eyed little-boy vulnerability, but the way he grabs a woman to kiss her is a thing of beauty—he takes control like a Mad Men-era Real Man. If he seems a bit young for the role, it only adds an interesting tension to the film’s dreamy sense of displacement. Szold is aiming for something beyond authenticity—playfully re-imagining archetypes to create a world that’s familiar yet not.

The pleasure of Joy de V. is above all spending time in Szold’s richly colored and human world. It’s a film with wisdom, humor, and a fully developed, dazzling sense of style. It’s impossible to fully pin down: like a Persian rug, its pleasures come as much from the beautifully designed details as from the piece as a whole.