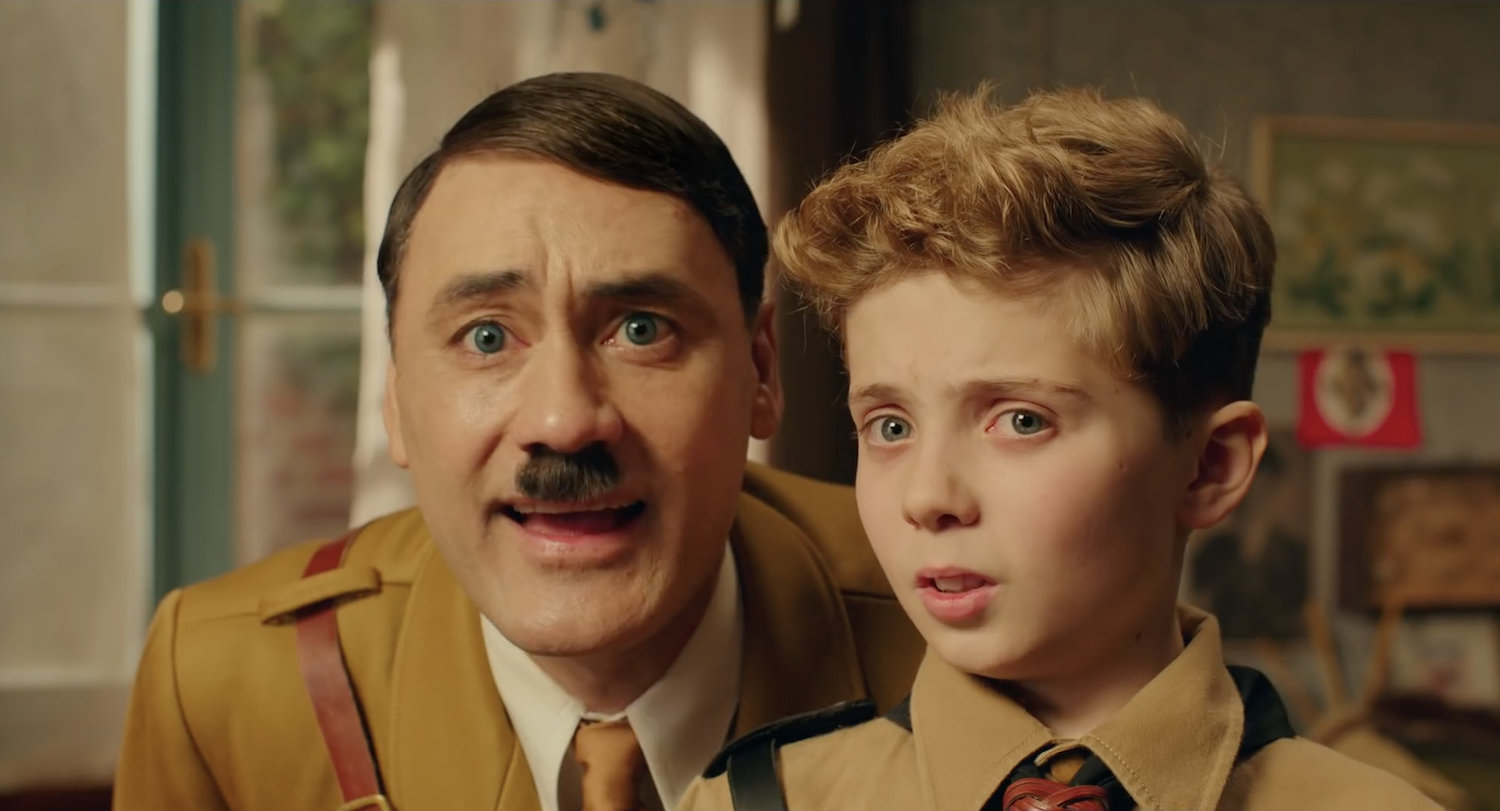 Though attacking fascism, whether through satire or polemics, may have seemed, after World War II, like going after a soft target, that once-hard truth has recently seemed, itself, to soften. With the rise of right-wing populism in various European states, in Turkey and even – <gasp> – in the United States, and with it the inevitable reevaluation of the evils of us-and-them ideologies, it seems as good a time as it has ever seemed to stake a claim to the common human values that (should) bind us all, and warn of the cyclical dangers of history. If we’re living in the upside down, let’s right the ship and restore sanity to the world. It’s okay to take down Nazis, in other words, so do so with gusto and pride, and by any means necessary.

Or, even better, with comic brio, as does screenwriter/director/actor Taika Waititi (Hunt for the Wilderpeople) in his newest farce, Jojo Rabbit. Based on the novel Caging Skies, by Christine Leunens, the movie follows 10-year-old Johannes (or Jojo) Betzler as he enters the glorious ranks of the Hitler Youth. The place is a small town in Germany and the time is 1944 (or so). Jojo is small but fierce, and ready for battle. At least that’s what he thinks. When he is unable to kill a rabbit, even with the taunts of his fellow trainees, we realize that he is a lot sweeter than he will admit, even to himself.

Then again, by the time we get to that scene, Waititi has already set the tone of jaunty irreverence that will drive the story, Jojo introducing himself while his imaginary friend, a prancing, uniformed Adolf Hitler (Jojo dreams big), offers advice and encouragement in the background. Directly afterwards, Waititi offers his take on the mass hysteria that swept Germany in the 1930s, cutting archival footage of Nazi rallies to the Beatles’ German version of “I Wanna Hold Your Hand.” Make of that what you will, but it’s certainly a point of view, mixing anachronism with insight in a bracing manner, launching us forcefully into the narrative.

Despite his gentle nature, Jojo accepts the Nazi ideology in its totality, though it could solely be, as another character tells him later, that “he’s just a 10-year-old boy who likes dressing up in a silly uniform.” He is especially virulent in his hatred of Jews, though neither he nor anyone around him seems to understand why. When he discovers a young Jewish woman hiding in his house, however, his commitment to the Führer faces its first test, much to the annoyance of imaginary Adolf (played by Waititi, himself). Which way will he sway? And more importantly, will Waititi pull off the comedy without trivializing the horrors of the Holocaust or sentimentalizing fascists?

The answer to that last question is a resounding yes. Playing a very risky game of feint, parry and thrust, Waititi raises the stakes with every joke he tells and every outrageous sequence he offers, skirting the inappropriate but remaining ever grounded in the savagery of anti-Semitism, totalitarianism and war. Lives are lost – one quite unexpectedly – and the threat of death pervades the movie, even as we laugh out loud.

The director is abetted in his crazy scheme by a stellar cast, including Scarlett Johansson (Avengers: Endgame) as Jojo’s loving (if not so Nazi-loving) mother, Sam Rockwell (Vice) as the (ridiculous) leader of the Hitler Youth, Rebel Wilson (The Hustle) as an enthusiastic Nazi, Thomasin McKenzie (Leave No Trace) as that unexpected home guest and, best of all, newcomer Roman Griffin Davis as the titular Jojo. It’s Davis who makes the film work, his doe eyes welling with emotion at just the right moments – exactly when and where a normal, non-psychotic child’s eyes would – to remind us that one of the great tragedies of any violent belief system is its corruption, and perversion, of innocence. The truth about our species is so terrifying that perhaps the best way to approach it is through humor.

Where Roberto Benigni’s 1998 Oscar-winning Life Is Beautiful too often wallowed in the sentimentality of its earnest premise – a father protecting his son by pretending that the Nazi barbarity is one big prank – here Waititi treats the reality with the gravity it merits, even while casting ridicule on all fascists and would-be fascists, striking hard and fast with vicious and very funny barbs. Bullies deserve to be laughed at, and with Jojo Rabbit, they get their due.