). It opened theatrically in New York City and Los Angeles on Friday, March 4, 2011, before expanding across the country. See here for a full list of dates.)

Though its windswept plains and hidden-away rooms are striking, Jane Eyre‘s most fascinating locale is its title character’s mind. Cary Fukunaga’s adaptation of the 1847 novel by Charlotte Brontë is colored first and foremost by its heroine’s imagination, something that instills the film with an eerie and unnerving energy from its first few moments. The young auteur has an eye for imagery and, what’s more, puts it to good use in enhancing—rather than distracting from—his larger aim of weaving a visual, aural, and thematic tapestry: Jane Eyre‘s lush sensorial arrangements create an immersive sense of the ethereal, of what’s there but isn’t. This comes most explicitly in the form of Jane’s hallucinatory visions–which set the stage early on for a milieu consisting as much of internal wandering as external happenings–but its more subtle threading throughout the rest of the film is what makes Jane Eyre so distinct as a cinematic experience.

On the surface, Fukunaga’s sophomore effort could hardly resemble his debut Sin Nombre less, but both feature detailed depictions of the have-nots and their differing means of advancing their positions: perceived and actual power via dog-eat-dog force in Sin Nombre, dignity and restraint in Jane Eyre. That Fukunaga transposes this fascination with the downtrodden so seamlessly from one setting to the other is a feat in and of itself, as well as a fascinating thematic through-line that makes the connection between his two pictures seem obvious in hindsight. An American, he shows as much control over the 19th-century British sensibilities of Jane Eyre as he does over the cartels of Mexico, not only doing the former justice but bringing all their best, most transcendent qualities to the fore. Jane Eyre the novel is one of images born through words; Jane Eyre the film takes Brontë’s prose and maximizes its imagistic potential. The words are no less powerful here, but they’re matched by the even-more-riveting images that accompany (and often subsume) them. Considering the source material, this is crucial not only to the film’s success as an adaptation but, more significantly, as a standalone work. 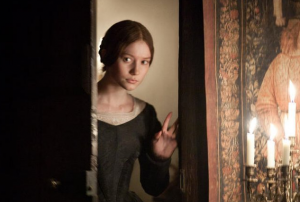 Rising star Mia Wasikowska embodies Jane and all her pent-up otherworldliness with ease and understatement, grounding the character in the earthly in order to more convincingly display her almost mystical air. Cast out by her spiteful aunt-in-law and begrudgingly taken in by an oppressive school for girls, Jane’s upbringing is one of abuse and marginalization from the earliest of ages. This instills her not with animosity but, remarkably, virtue. What most impresses about Jane—and what Wasikowska exhibits wonderfully—is not only her near-constant denial of herself but her simultaneous refusal to be trodden upon. Jane is deceptively laconic; few characters (literary or otherwise) are as simultaneously rooted in facticity yet sprightly as she.

Whereas her eventual love interest Mr. Rochester (an inspired Michael Fassbender) is something of a withered spirit. Seemingly unsavory but nonetheless magnetic, his attraction to Jane appears to be the only thing restoring his former vitality. It is not without whimsy when he calls her a “rare, unearthly thing,” intimating his desire to know more of her otherworldliness, her zeal. What’s more, he’s also her equal in both intellect and hidden sorrow, though they show it in different ways. The resultant verbal sparring in is not unlike that of Kate and Petruchio in The Taming of the Shrew; the wordplay is tense but betrays a certain growing affection. She is a poor, marginalized girl of unbending principle; he a wealthy gadabout. Intact is the book’s message on class/gender inequality, but it’s used mainly as a means of underscoring the forbidden nature of their budding relationship. Though initially off-putting, this romance shows itself to be more nuanced and compelling than most—and it’s because of its oddity, not in spite of it.

Given not only the rigidity of social constraints but also Jane’s self-abnegating ways, she and Rochester are seemingly at arm’s length from one another even at their most intimate. Within this slight disconnect, however, is the spark from which Jane Eyre‘s central focus flows: two lost souls joining together in the darkness. This unfolds subtly, more often by candlelight than the full force of the sun. As much a tale of woe as an occasional display of the sublime, this is also a ghost story of sorts, one whose demons are not of the underworld but rather our own. Some of the film’s more overtly dark elements are thus given a human face, but it’s our implicit half-knowledge of what exists beyond the veil which ultimately makes Jane Eyre aglow with such mystery.

BEING FRANK: THE CHRIS SIEVEY STORY