(Heaven Knows What, the latest film from the Safdie Brothers continues their almost experimental approach to narrative filmmaking. This time they’ve blended documentary with fiction to create a powerful combo that becomes difficult to separate out. Heaven Know What hits wide release on May 29 via RADiUS-TWC)

The girl is blissed-out eyes aflutter lying on the ground, kissed all over by a guy who’s obscured by his hood. She is locked in a private world with him. She’s so high. She rolls on top and he begins to talk to her but as his lips move—and they’re totally lost in each other—what we hear is crying. The crying is hers, as she now sits huddled and alone on the street. It’s a fitting start to the Safdie Brothers’ (Josh and Benny) third feature Heaven Knows What. This girl doesn’t get to feel that peace, at least never for long enough. Instead, she roams the streets of New York chasing it, chasing love, trying to feel alive, to stay alive, but doing everything in her power to die.

This girl is Harley and Harley is Arielle Holmes, or, more accurately, Harley is very heavily based upon Holmes and her past as an addict. While researching the Manhattan diamond district for their project Uncut Gems, Josh Safdie came across Arielle and was immediately taken with her, her ability as a performer and writer, her presence. The brothers encouraged her to write her memoirs—now titled Mad Love in New York City and soon to be released—and crafted a story out of these experiences with frequent collaborator Ronnie Bronstein. The result is a hybrid—evidenced by its appearance at True/False earlier this year—a film that has the narrative thrust of fiction and the immediacy of cinema verité.

The story lies in the wake of a transgression of Harley’s that Ilya (Caleb Landry Jones), her boyfriend, will not forgive. To show her repentance, she says she will die for him. Her earnest pleas are met not even with pity, but disregard, cruelty. These are not empty threats; Harley busks for the money, buys the razor blade, and slices her wrist open. When you so regularly take your life in your hands, it’s nothing to think of throwing it away. At least you will have made your point. But these are half-truths: the words are heavy, but the blood is real. As soon as Harley and Ilya see the blood pouring out of her both snap to, searching desperately for an ambulance. When it’s time to go into the hospital, be amongst those with judging eyes, Ilya bails, letting her down again, a perennial disappointment. 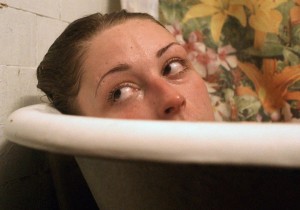 Heaven Knows What is a film of absence. Those fleeting moments of pleasure that open the film must sustain Harley, and the audience, for some time because when we see Ilya next, he’s neglectful, abusive, evil to his core. Harley’s turn to heroin plugs a hole, an emptiness that Ilya’s abandonment brings on. A number of men, Skully (Necro), a guy with a cool motorcycle, and most notably the drug dealing Mike (Buddy Durress) try to fill this role, offer a momentary reprieve, but the vacancy in Harley’s stare betrays what she can’t shake: they’re not Ilya and they never will be. For worse, Harley wants to be with Ilya until one or both of them are dead.

The film’s naturalism appears “captured” but it’s precisely its effortless quality that makes the alleged spontaneity deceiving. Holmes at times did ten plus takes, a far cry from a so-called fly-on-the-wall approach. Cinematographer Sean Price Williams has honed his grainy, handheld aesthetic through Alex Ross Perry’s films and the Safdies’ own short The Black Balloon and here again it fully realizes the story and perfectly accentuates the film’s performance style. After Ilya leaves Harley at the hospital, the opening credits roll and under them a meticulously and elegantly choreographed tracking shot that follows Harley through the washed out corridors, from one calamity to the next. The camera’s movement appears shaky, going in and out of focus and as those are signifiers of verité, one can easily gloss over the careful precision—the grace—of the camera traveling through the space. What’s even more, the shot begins with a fight and ends with one: no matter what Harley does, regardless of the brief moments of rest, the stealing of a quick grin, in the end it’s pure chaos. The choice of music is equally poignant whether it exists as complement or counterpoint to the images that flash across the screen. The Safdies blend Debussy and techno so giving Harley’s world a bipolarity that oscillates between heaven and hell without a moment’s notice.

Ilya comes to and we finally see the young couple in love. They scheme and steal together, fall to the sidewalk in an embrace. The moments are few but full: their love burns through it all, the rest goes dark. When Ilya is reminded that Harley still has Mike’s phone he grabs it and throws it away. In a rare surrealistic flourish, the camera cuts to reveal a firework shooting up into the night sky. With the phone gone, it’s finally just the two of them. But, like that firework, their love explodes, falls, and quickly disappears into nothing.

Days before the shoot began the real life Ilya had a near fatal overdose. Josh contemplated canceling the film as the suffering was too real, the danger too close. Their decision to press on is all of our gain; the depiction of Harley’s mad love in New York City does not feel like life or death. It is.