and Blu-ray in a special remastered edition thanks to Kino International.)

How do you make a Christian vampire movie? Perhaps more specifically, how does one make a film that accepts the idea that undead, bloody thirsty immortals and the all-powerful protestant God are both existent presences in the Universe that must be reckoned with? It sounds like sort of a silly idea, right? Maybe not.

Bill Gunn, the late African-American playwright, actor and film director, gave it a shot in his almost legendary Ganja & Hess, a bona fide cult film, the anti-Blacula, defiantly difficult and parochial, a vampire film in which the word itself is never used and its tropes mostly discarded. Ganja & Hess is jolting, jagged, lyrical, mythic and utterly unclassifiable, as avant-garde as the most independent film of today or any of the New American Cinema work from the 1960s or audacious studio films of the 1970s, with resonances one isn’t likely to encounter ever again.

Gunn subversively deconstructs the class relations that exist within the black “community” and the expectations of both his financiers and his potential audience while delivering a meditative and un-condescending representation of black American protestant Christianity within a potentially lurid black exploitation movie. No wonder then that Greg Tate once eulogized about the equally unclassifiable man behind it, in a 1989 piece for The Village Voice shortly after Gunn died at 59 (or 54, depending on who you talk to), his masterpiece long forgotten, “The attempt to bury Bill Gunn began in his life.”

Synopses are for wusses (count me among the many), but I can’t think of anything I’m about to tell you as a spoiler in the traditional sense of the term given the extreme uniqueness of this picture, so here we go. Hess Green (Duane Jones of Night of the Living Dead) is a wealthy black anthropologist, tall, elegant and methodical. While studying an extinct blood addicted central African culture, he is stabbed by his new assistant George Metha. As played by Gunn, George is polite and awkward, neurotic and suicidal (though his screen time is limited, his performance is riveting nonetheless). After being caught trying to hang himself in Hess’ backyard, George attempts to dispatch Hess with a wooden knife that, well, turns him into a vampire instead. Metha kills himself afterwards, his second attempt in as many hours, with a gunshot to the chest while naked in Hess’ bathroom. The re-born Hess soon discovers him and can’t help the temptation to dip into the spoils.

What does a conscientious vampire do, especially one with the responsibilities of an academic, responsible father, debonair bachelor and black American protestant? Robbing blood banks is one option Hess pursues; yelling, covered only in a blanket in endless fields of wild grass, is another. Soon, Metha’s wife Ganja (the adorable Marlene Clark), demanding and radiant, comes looking for George. Once she discovers what has taken place, well after she has begun a passionate affair with Hess, she chooses to allow him to make her a vampire as well, a choice that, of course, leads to Hess’ demise. Of sorts. I guess. Ultimately, for Hess, the only way out of vampirism, a lifestyle that has truly worn on his sensitive Christian soul, is to give himself to Jesus. And that’s only a fraction of what lies inside. 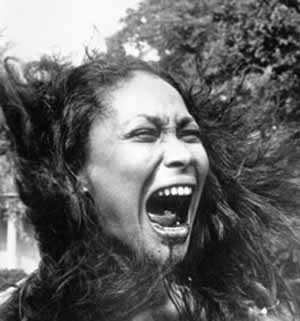 Shot in saturated Super 16mm, Ganja & Hess is formally and thematically audacious at every turn, images unfolding one upon the other like an Edgar Allen Poe poem painted mahogany. Like some spiritually infused cousin of David Lynch, Gunn unsettles us with arresting images and narrative disjunction. His soundtrack, largely designed by Sam Waymon, is full of striking tribal chants and menacing dissonance. Waymon also appears in the movie as Hess’ driver and his minister. He delivers the film’s opening voice-over, in which he says of Hess: “He’s an addict. He’s not a criminal, he’s a victim. He’s addicted to blood.” He also accepts Hess into Christ toward the end, in a room full of completely unsuspecting Black parishioners.

We could talk about the finale too, but I’d rather you discover its mysteries for yourself, so strange and impenetrable as they are. Hess is dead, while Ganja is still among us. Perhaps she’s sired a new partner. What Mr. Gunn has in store for you sticks with you and doesn’t let go so easily. Viewers beware.

Ganja & Hess was long lost following its reception at Critic’s Week at Cannes in 1973, where it received a standing ovation, before it was cut up into a sexploitation film and boxed up under six different titles. At least these days you can see Ganja & Hess as Gunn originally intended, not just at BAM this weekend (Saturday July 5th, 4:30pm, 2008), but in a new DVD of his definitive cut. His first film, Stop, which was made with Warners Bros.’ money, just a year after they made Gordon Parks the first black studio director with his autobiographical The Learning Tree in 1969, was subsequently shelved by the studio following its completion. It was revived by the Whitney at a retrospective of Gunn’s work following his death, but disappeared into the vaults again, and now only exists in assembly form. 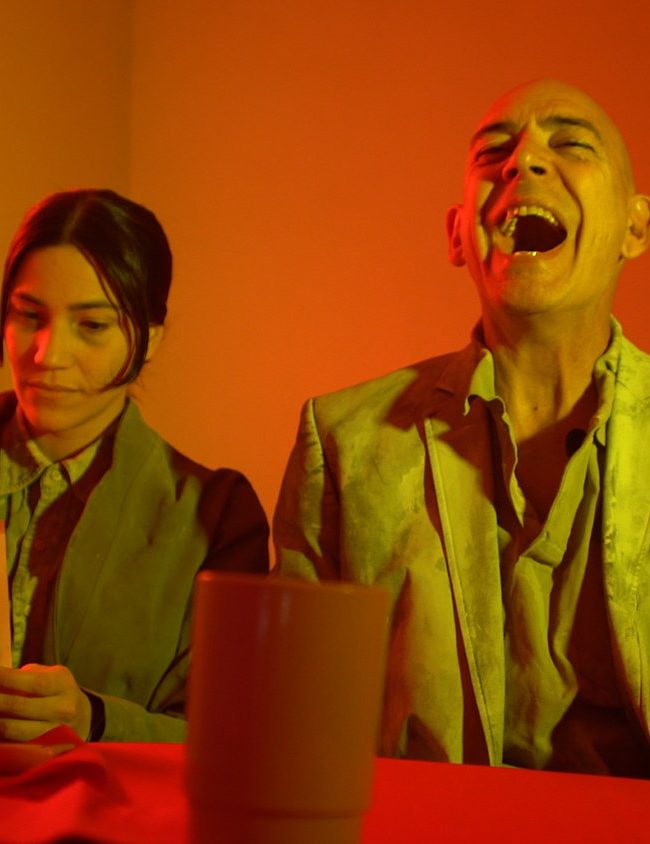