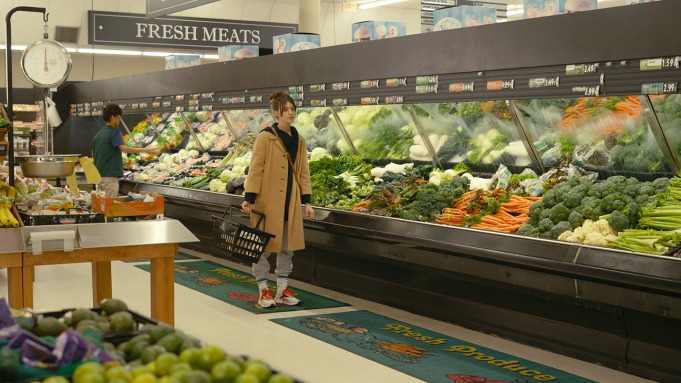 (The 2022 Sundance Film Festival runs January 20-30 all virtually. Check out Bears Rebecca Fonté’s movie review of Fresh. Like what you see here on Hammer to Nail? Why not pay just $1.00 per month via Patreon to help keep us going?)

Warning: this review will certainly contain spoilers and may piss off the easily outraged…

So here goes, I’ll go right into the most divisive thing I’ll say: I guess everything in the movie Fresh is OK because a woman (Mimi Cave) wrote and directed it. I mean it is literally impossible for me to talk about a film in which women are being kidnapped and held in some sort of underground basement without checking the provenance. I might even avoid it if it was directed by a man. Is that fair? I think it’s fair for another 20 years as we make up for the sheer number of times we were forced to sit through some male fantasy perspective of a similar story.

In Fresh not only are the women being kidnapped but they are also having body parts cut off and sold for a cannibal clientele. Noah (Daisy Edgar-Jones) has had it with online dating. When she meets Steve (Sebastian Stan), a sweet guy in the grocery store and has a couple phenomenal dates with him, she is ready to run off on a weekend get away with him despite her best friend Molly’s advice. Of course, she should have taken that advice because it’s not 10 hours later when she’s been drugged and chained to the wall in a secret basement.

Part Berlin Syndrome part Raw with a little of the lead charm of American Psycho and the strange sort of mentor/mentee relationship like Jennifer Lynch’s Chained, Fresh wears it’s influences on its sleeves, although not altogether ineffectually. Personally, I appreciated creepy Steve’s taste in 80s pop much like Patrick Bateman. Less effective is the clearly Get Out sidestory of Molly (Jojo T. Gibbs) and her would-be savior bartender ex (Dayo Okeniyi) who bails because he knows people like him get killed in situations like this.

The most curious character in the film is Steve’s wife Ann (Charlotte Le Bon) who, major spoiler, is in on it. A later scene reveals that she is missing a leg, which of course makes me wonder if she is a former victim of Steve, graduated to wife. She also has a long moment of looking at herself in the mirror – what’s going on in there? Of course, none of those questions are answered and she just becomes one more impediment to escape for our characters.

The most disappointing thing about the movie Fresh is just how unfresh it is. There’s almost no moment in the movie that I didn’t see coming at least 15 minutes beforehand and none of the characters are particularly full of depth. Actually, if this film had been told from the POV of Steve’s wife it might have been really interesting. Instead, it’s just a slick thriller which toyfully dances back and forth between exploration and exploitation with tremendous cinematography and glorious production design. The number of red flags that Noah should have seen on her way to abduction is really frustrating. Steve has no online presence, their weekend trip starts with him saying traffic is really bad so let’s start the weekend at my place and leave in the morning (when the next shot in the film is them driving clearly in no traffic), and there’s no cell phone reception on the way to his house or Wi-Fi in his house. It just makes her kind of stupid. There’s also an obligatory scene of her in a self-defense class with Molly that is supposed to set up any sort of fighting back she does later, which feels like a bad producer’s note taken. Most disappointing is the lack of thoroughness in the main pursuit of our serial killer. He talks on and on about how valuable this meat is and how it is worth way more if the victims remain alive. Yet at one point in time we see his freezer is literally filled with appendages on ice. There are only three women currently being held captive here, one of which does not make it until the end.

So all-in-all there’s nothing particularly wrong with this film, if your palate can stomach the subject material (pun intended). But it’s not particularly groundbreaking, and it’s sort of disappointingly similar to what I imagine the same film would have been in the hands of a male director. Which is I think the most disappointing thing of all because if this had been made by a male director, I’d be screaming from the rafters that this film should have only been made by a woman. I still liked it. But my appetite for exploitation it’s a little more expansive than the next person. Again pun intended.