(Force Majeure won the Un Certain Regard jury prize at the 2014 Cannes Film Festival. Sweden’s submission for the Best Foreign Film Oscar, it is currently playing in theaters. For a complete list of cities and dates, visit the official website of Magnolia Pictures.)

In Ruben Östlund’s Force Majeure, Ebba (Lisa Loven Kongsli), Tomas (Johannes Bah Kuhnke), and their young children Vera and Harry (Clara and Vincent Wettergren) are a Swedish über-family whose matching thermals are as stylish as they are creepy. As their idyllic winter vacation progresses, a wry, tense portrait of a family at the tipping point of divorce is exposed, vividly mirrored in the sweeping, terrifying, equally unpredictable Swiss Alps setting. There is something completely foreign going on here, which made me feel like I was witnessing an alien land where beautiful people elegantly throw themselves down mountains and force each other into awkward dinner parties. But what makes Force Majeure even eerier is the realization that the strange world unfolding on screen is an all too familiar one. Director Östlund sees the contemporary family unit as a mundane form of torture, and happiness as a gorgeous, unattainable surface of a dream. It is his creation of this surface, with the repression and laughter hiding below it, that makes this one of the best narrative features I have seen in quite a while; it teeters on the brink of a new style of filmmaking altogether.

Force Majeure looks like no other film I have encountered before. The cinematographers (Fredrik Wenzel and Fred Arne Wergeland) create a sweeping wide frame where everything is given equal weight. Each figure slyly slides past one another like planes more than things, layers of free-floating anxiety, feelings and characters weightlessly gliding along on screen. A foreboding current of imagery floats through each frame, sometimes grounded by a deadpan joke or an outburst of emotion but often making everything feel simultaneously claustrophobic and wide open. The style points out the artificial, superficial, insignificant world we have placed atop the giant natural one we try to control but that is in actuality far beyond our dominion. 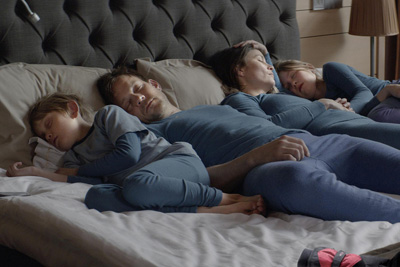 Apparently Östlund creates a lot of his stylistic feel in post-production. The director executes sleights of hand that add a level of voyeurism and magnitude—an amazing green screen natural disaster or a cameraman erased from a mirror as he captures the reflection of the whole beautiful family blankly brushing their teeth, buzzing electric toothbrushes in hand. The look of the film is enhanced thanks to sly editing that smooths out the edges of reality, augmenting the world into something better, or recreating it with the desired control a filmmaker can now take to an extreme with digital photography. If film is a reflection of the world, then this new era of digital filmmaking is capturing the fallacy of our manufactured, virtual lives perfectly.

At one point, when the argument over the version of an event boils, lithe Ebba says something like, “We have it on video, why don’t we watch what really happened?” At this moment, everyone in the theater began fidgeting, wondering if we were about to get involved, a relief upon realizing it was her husband’s camera phone she was to consult and not the footage imprinted on those of us in the theater. Östlund loves toying with his audiences. In this case, he calls us out on our feeling of distant safety we experience in the theater, reminding us that it is all an illusion. Even the technology that Ebba relies on to tell her the truth is not a reality; it is a version of events but not an actual experience.

I don’t know what Force Majeure is exactly. It is hilarious with a dark deadpan stare. It is a new form of realism that takes into account how unreal the world is nowadays. It is a psychological portrait delving into the foreignness of instinct, the smooth suppression of desire, the modern family in the anthropocene era. It is a study in modes of being. I guess my inability to pin the film down is really what is at the core of it: even if we think we know something, or someone, our knowledge does not make it an unwavering truth.