(*** Finally, Lillian and Dan is now part of the permanent online viewing collection at No Budge Films. At 9:30pm EST on Thursday, June 7, 2012, there will be a live post-film Q&A with director Mike Gibisser.*** Previous fests include: 2008 AFI Fest and the 2008 Starz Denver Film Festival. Visit the film’s official MySpace page for more information. NOTE: This review was first posted in November 2008 in conjunction with those aforementioned festival screenings.)

Finally, Lillian and Dan is a character study about people trying hard not to have character. Its leads are obsessed with moving through the world as inoffensively as possible while still (as Oprah would put it) reaching for the love they deserve. Writer/Director Mike Gibisser, an Emerson grad who embarked on this quietly ambitious 16mm project at the age of 22, smartly chose to intertwine the narratives of two different but very connected loners. The film obsessively follows dual subjects until their lives collide. This braiding of narratives offers relief from characters so turned inward that they might torture the audience if left to pilot a film on their own. When contrasted, though, there is plenty of room to breathe. We might not be able to connect with them, but they connect with each other.

Lillian (Gretchen Akers) is beautiful but painfully shy. She works in an office, has neat clothes but messy hair. She is silent as a mime, an impression enhanced by the fact that she often wears white gloves. She lives with her Grandma, who looks like an aged Little Lulu, with the sing-song irritability of Little Edie. She turns the cliché of the sympathetic matriarch on its head—this isn’t the infinitely loving grandma who saved Michelle Williams’ character from self-destructing on Dawson’s Creek. As she watches Lillian sob desperately she regards her granddaughter with irritated distance, muttering “oh, come on.” She dances to a blaring record early in the morning and its unclear whether she wants to cheer Lillian or torture her (what results is the greatest dance-off since Britney and Justin tried to out-groove each other in a Beverly Hills club shortly after their breakup). The two women share a colorless suburban home that’s as tidy as the supermarket but as rife with pathos as Grey Gardens.

Dan (Jason Kean), meanwhile, smokes and drives and grimaces, nowhere to be and no one to talk to. His halting nature and palpable anxiety are only rivaled by that of Lillian, his lady-love to be. Dan follows women down long city blocks, choking on his own desire to say hello, seemingly invisible even though he is carrying a massive pink stuffed unicorn that looks like it was won at a fair for the down-and-out. In one particularly telling scene he appears as a confused, Chaplin-esque hobo shuffling down the aisle of the local Whole Foods in an ill-fitting suit, furrowing his brow at the infinite wine options in the bougie store. The intentions behind his actions are impenetrable to the audience but one gets the sense they confound him even more. The first real decision we see him make is his choice to pursue the child-like Lillian. 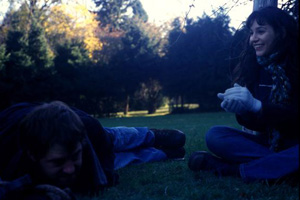 Technically, Lillian and Dan is one of the most assured and capable DIY films I’ve seen yet. It is shot beautifully, all blues and grays and close-ups so tight that they border on abstraction. Low-lit, heavy with grain, Lillian and Dan’s first kiss is a golden silhouette, blurring the line where one person ends and the other begins. Although the film employs plenty of handheld camera, it also has a number of well-choreographed pans and stationary tableau that would make Edward Hopper proud. The sound design is lovely as well, with a tinkling score by Soltero and lots of ambient noise.

The solid sound mix is essential, considering the near-wordless nature of the film. A friend and I once played a [nerdy] game in which we calculated the percentage of dialogue in various movies. It’s still a useful tool for me when I’m unpacking a film. For example, Noah Baumbach’s Kicking and Screaming is approximately 92% dialogue. Old Joy is only 30%. Finally, Lillian and Dan is around 5%. Yet its characters are constantly on the verge of saying something. The moments when the characters finally express themselves verbally are the least effective and affecting—after all that build up, the words come too easy, too strong. Or maybe they just sound alien set against all that silence.

Finally, Lillian and Dan gives the impression of having been made in a vacuum, conceived without influence and then delivered, squinting, into the fluorescent world around it. Naked and trembling, it was then subject to placement in any number of cinematic subcultures. But to regard this film (as I suspect some might be inclined to do) as just another DIY flick about awkward post-grad love would be to completely miss its brutal and complicated charm. Finally, Lillian and Dan shares concerns with filmmakers from Lynne Ramsay (grubby naturalism) to Judd Apatow (schlubby dude meets and charms hauntingly pretty girl; only this time, the pretty girl can barely speak and wears a party hat alone in her house). It even reminds me a little bit of Benny and Joon. But one gets the impression that these connections are accidental, parallels to be drawn after the fact. Finally, Lillian and Dan is an isolated occurrence, existing on its own whispered terms.